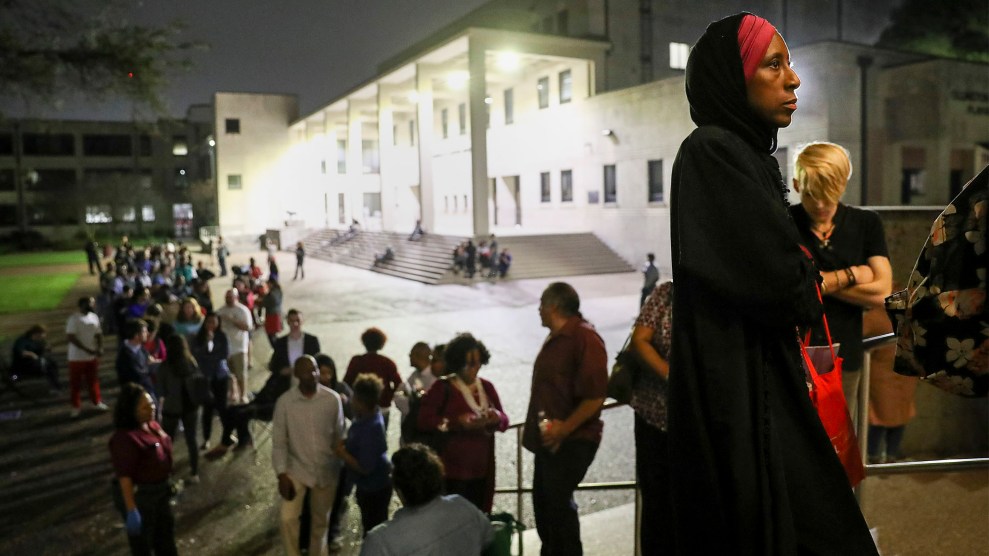 At 1:30 a.m on Wednesday morning, Hervis Rogers was the last person to cast a ballot at a polling place on the campus of Texas Southern University, a historically black college in Houston. By that time the polls had long been officially closed and the state’s Democratic primary had already been called for Joe Biden. Rogers had waited six hours and twenty minutes to vote.

“I wanted to get my vote in, voice my opinion,” he told ABC13 in Houston. “I wasn’t going to let anything stop me, so I waited it out.”

Six hours and 20 minutes, to be exact. #HarrisVotes https://t.co/4Lrt29aTtZ

There were similar reports of long lines in heavily Democratic cities across the state, including Austin, Dallas, and San Antonio. While voters in California also faced delays due to a shortage of polling locations and problems with new voting technology, the longest waits took place in Texas, particularly in Houston’s Harris County, where the population is 43 percent Latino and 19 percent black.

"There's thousands of us and we've been sitting out here for five hours"@GarrettHaake chats with Texas voter caught in long lines at polls on #SuperTuesday pic.twitter.com/jV9JPFl5X7

Local election officials seemed unprepared for the high turnout, which was up 40 percent in the county compared to the 2016 Democratic primary. There were only six poll workers at the Texas Southern location, according to NBC News, where 10,000 students are enrolled. And the polling site had only 10 voting machines, which were twenty years old. Five of them broke down for part of the night, exacerbating the long lines. With many local races, Texas voters faced a very long ballot that took a long time to fill out.

This is INSANE. These people have been waiting in line to vote for five hours at TSU. Polls closed 4.5 hours ago. pic.twitter.com/PLEJxixini

Texas’ troubles weren’t just a case of bureaucratic incompetence or aging election infrastructure: The long lines were also by design. As my colleague Sam Van Pykeren noted last night, from 2012 to 2018, Texas counties shuttered 750 polling places—more than any other state. The closures disproportionately harmed Democratic and minority voters. “The 50 counties that gained the most Black and Latinx residents between 2012 and 2018 closed 542 polling sites, compared to just 34 closures in the 50 counties that have gained the fewest black and Latinx residents,” according to a recent analysis in The Guardian.

Texas was allowed to close these polling places because of a 2013 Supreme Court decision gutting the Voting Rights Act that enabled states with a long history of voting discrimination like Texas to take such actions without federal approval. All together, states previously subject to such supervision have shut down 1,688 polling locations from 2012 to 2018, according to a report by the Leadership Conference on Civil Rights.

Harris County closed 52 polling places during that time, the third most in Texas. Afterwards, the county adopted so-called vote centers that allow voters to cast a ballot at any location, rather than be assigned to a specific polling place. While the change is supposed to make voting more convenient, it has meant fewer polling places in cities across the state. On Tuesday, virtually every Democratic polling location in Harris County reported a long wait at peak hours of the afternoon and early evening.

Look at wait times in Democratic polling locations (on left) in Houston vs Republican ones (on right). Virtually every Dem location has a long wait but almost no Republican ones do pic.twitter.com/4CUFqaOcyu

Long lines hurt some communities more than others. “In predominantly minority communities, the lines are about twice as long as in predominantly white ones,” the New York Times reported in 2016, citing research from Harvard University. “And minority voters are six times as likely as whites to wait longer than an hour to vote.”

With Texas emerging as a potential swing state in November, the long lines in minority and Democratic areas could be even longer in the general election. As Texas Democratic State Senator Carol Alvarado, who represents part of Harris County, tweeted Tuesday night: “Changes have to be made for the big one in November.”

Listen to MoJo reporters Tim Murphy and Fernanda Echavarri share their reporting about Biden’s big night, Bernie’s long fight, and the knockdown fight for delegates to come, on this special Super Tuesday edition of the Mother Jones Podcast:

Correction: This post originally misspelled Purvis’ name, and has been updated to clarify when Harris County adopted voting centers.