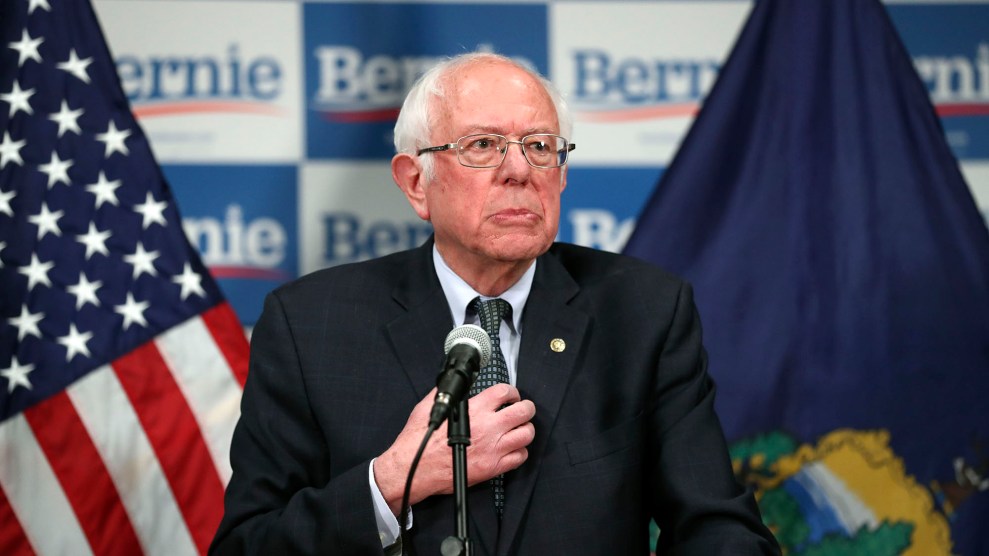 Since the beginning of the presidential campaign, the most significant divide between the two leading Democratic candidates was over what kind of crisis the United States is actually facing. Former Vice President Joe Biden believes the crisis of American democracy is President Donald Trump—an maniac whose coarseness and vanity and malevolent ideology has broken down American institutions. Biden is running for president, he tells audiences, because of Trump’s response to the white-supremacist murder in Charlottesville in 2017. His remarks Thursday in Delaware on the coronavirus pandemic sought to project the steadiness and pragmatism he believes is necessary to get the country back to normal.

Bernie Sanders does not like Trump, of course, and he would not disagree with much of Biden’s critique of the president. In the short-term, there’s real overlap in the actions they’d like to see from the federal government to mitigate the effects of the crisis. But in his own response Friday to the pandemic—which has shut down conventional campaigning ahead of next week’s primaries in Ohio, Florida, Illinois, and Arizona—Sanders made a far different case. The coronavirus crisis, he argued, had laid bare the larger failures of the American system itself—its lack of a social safety net for working people, its privatized health care networks, and a trade and manufacturing policy that had outsourced the production of necessary supplies to other countries for the sake of corporate profits. In other words, for Sanders there’s no normal to go back to.

Sanders, who was speaking on the subject for the second consecutive day at the same Burlington hotel, sought, like Biden, to present the kind of leadership he believes is absent from the White House right now. He spoke softly for 20 minutes, in front of Vermont and American flags, on the measures he believed were necessary to protect Americans from the health and economic effects of the crisis.

The virus, he argued, was exposing unique structural weaknesses. Pointing out that a “full battery of tests” for the virus costs $1,300 without insurance, Sanders noted that “40 percent of our people don’t have $400 in the bank to pay for an emergency expense.” What were they supposed to do in a crisis like this? “Maybe they end up going to a payday lender,” he warned, driving them deeper into debt, or maybe they would decide to “go without a test, which every doctor in the world tells them is a test they must have.” And while insurance companies have said they will cover the full cost of the test, they haven’t said the same about treatment, which could cost far more. Such a system is “cruel,” Sanders said.

But it isn’t simply cruel in the abstract, or a problem facing other people. The pandemic had, he said, crystallized the consequences of health care inequity in a way that everyone could understand. When Sanders said on Friday that “what this crisis is beginning to teach us is we are only as safe as the least insured person in America,” it was not just a rhetorical flourish—he was saying that if your neighbor does not have insurance and can’t access health care, you are at risk too. Medicare-for-all has always been presented as an altruistic idea; but sometimes a bit of selfishness goes a long way.

“People who cannot afford to go to a doctor are at the risk of spreading infections,” Sanders said, envisioning a scenario in which “we have millions of people who may be dealing with the virus, but they cannot go to the doctor.”

It’s sort of impossible to try to imagine how the campaign might have played out differently if it were just starting under these circumstances—a global pandemic and a looming recession—rather than just wrapping up. Already, the crisis has knocked down some ideological barriers that have been up in Washington for a long time. Conservatives have made the case for paid sick and family leave, and Trump himself has suspended interest payments on student loans. Municipalities are stepping in to grant relief from evictions. The idea of simply waiving copays is itself the kind of measure would have been unexpected just a few weeks ago.

“I would hope that this crisis—and maybe that’s my main point today—should be a moment in which people ask fundamental questions about the rationality of our current health care system,” Sanders said.

The irony of Sanders’ candidacy is that he has found the perfect encapsulation of his message at the worst possible time—after the contest is all but over, and the crisis itself makes campaigning impossible.