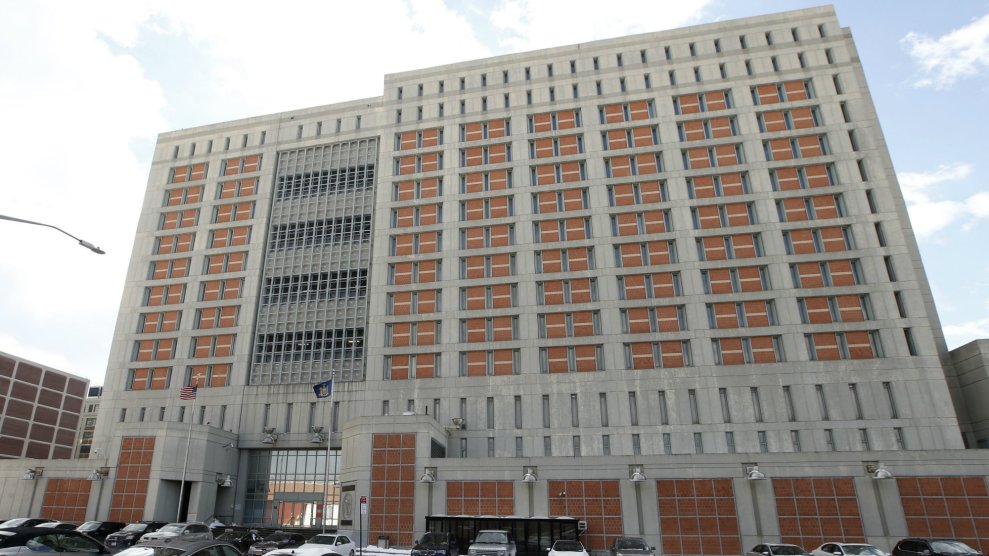 On Saturday, MSNBC host Chris Hayes tweeted that he’d received word that there is no soap or hand sanitizer at the Metropolitan Detention Center in Brooklyn, New York, a federal jail that is operated by the US Bureau of Prisons. “We’ve been begging [the Department of Justice] for weeks for hand sanitizer and they won’t give it to us,” a facility guard reportedly told Hayes’ source.

The Bureau of Prisons has not responded to a request for comment about the situation in the Brooklyn facility.

As infections and death from COVID-19, a disease caused by a new coronavirus, spread globally, officials from the World Health Organization, the Centers for Disease Control, and other public health experts are recommending that one of the most effective strategies for containing the epidemic that has killed more than 3,800 people worldwide is for everyone to conscientiously wash their hands with soap and warm water.

Those simple steps can be close to impossible for many of the most vulnerable populations, like people who experience homelessness or those who are currently incarcerated. Last week, Sen. Kamala Harris (D-Calif.) requested that the US Bureau of Prisons, which is part of the Department of Justice, provide Congress with information on how the agency intends to keep the people who are behind bars in federal facilities safe.  “Our incarcerated population faces severe threats to their health and safety every day, and BOP must prioritize and work diligently to improve prison conditions nationwide,” Harris wrote. “As the country prepares for coronavirus, it is also incumbent upon BOP…to prevent outbreaks and to safely and humanely treat all affected individuals.”

Sen. Kamala Harris requests the Bureau of Prisons provide information about coronavirus preparation in prisons.
“The risk of community spread poses a critical and unique threat to vulnerable populations, including those in our prisons and jails." pic.twitter.com/B7JpFHxKl4

Infectious disease spreads rapidly in detention facilities because of close living quarters and unhygienic conditions—inmates, visitors, and guards may not have what they need to protect themselves. Last week, when I spoke to Leah Pope, a senior research fellow at the Vera Institute, who specializes in expanding access to health care for people in the criminal justice system. She explained that compared to prisons, which are also dangerous, “jails are particularly more frightening because of massive turnover.” MDC Brooklyn holds about 1,600 inmates at a time, some of whom are awaiting federal trial while others are serving shorter sentences. The constant turnover of jail inmates makes the facilities more susceptible to the spread of infectious diseases.

This is not the first time that MDC Brooklyn has faced criticism for its treatment of inmates. In February 2019, during a polar vortex weather event, the facility lost power and subsequently heating, according to inmates and their lawyers.  On Twitter, videos circulated of inmates banging on windows and shouting down to local politicians that there was no heat inside as temperatures outside dipped below freezing outside. MDC Brooklyn officials insisted that the power outage didn’t affect heating. A report from the Department of Justice found that some inmate areas were, in fact, too cold and that the jail and BOP failed the communicate with inmates and other stakeholders about the situation. The report recommended that the jail take steps in the future to minimize inmate impact when further issues arise.

In an attempt to address the shortage of hand sanitizing material in the New York, which has declared a state of emergency because of at least 142 cases of the virus that have been reported, Gov. Andrew Cuomo on Monday announced that the state would be producing high-quality hand sanitizer to meet general demand. Who was going to produce it? Prisoners who resided in New York state run facilities. As my colleague Samantha Michaels reports, that doesn’t mean they will actually benefit from their work.

Because of their poor access to hand-cleaning supplies, these workers face a higher risk of infection from the virus—and it’s not even clear that they themselves will be able to use the sanitizer. At most prisons across the country, inmates aren’t allowed to use hand sanitizer because its alcohol content means it’s considered contraband.