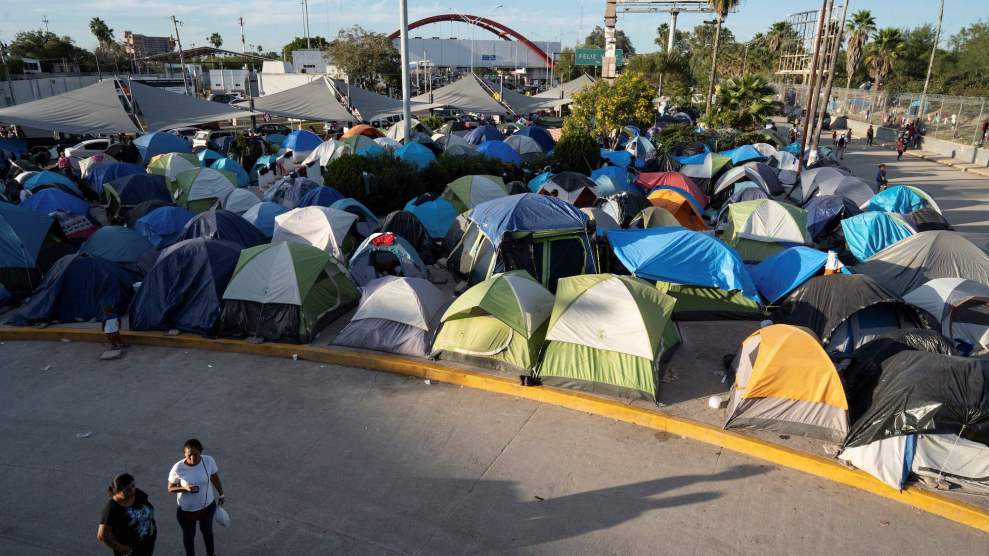 An encampment in Matamoros, Mexico, where around 2,000 people were living in November after being forced to wait in Mexico for their US court dates.Lexie Harrison-Cripps/Getty

The Supreme Court will allow the Trump administration to continue to force asylum seekers back to Mexico while they await their US court dates.

In an order on Wednesday, the court overturned the Ninth Circuit Court of Appeals’ decision to block the Department of Homeland Security from enforcing the so-called Remain in Mexico policy that makes asylum seekers spend months waiting in dangerous border cities. Justice Sonia Sotomayor was the only dissenter.

“The Court of Appeals unequivocally declared this policy to be illegal,” Judy Rabinovitz, special counsel in the American Civil Liberties Union’s Immigrants’ Rights Project, said in a statement. “The Supreme Court should as well. Asylum seekers face grave danger and irreversible harm every day this depraved policy remains in effect.”

The Trump administration began returning asylum seekers to Mexico in January 2019. Since then, roughly 60,000 people have been sent back while they wait for hearings at court facilities on the US side of the border. The advocacy group Human Rights First has documented more than 1,000 public reports of people being violently attacked while waiting in Mexico.

In Mexico, the policy, officially known as the Migrant Protection Protocols, has forced asylum seekers to remain in crowded encampments that lack running water and adequate medical services. In the United States, Remain in Mexico has wreaked havoc on the immigration court system and people’s ability to receive a fair hearing. As one attorney put it to Mother Jones, the policy is “a fucking disaster that is designed to fail.”

Earlier this month, the Ninth Circuit ruled that it would block the program in Arizona and California starting on Thursday, unless the Supreme Court overruled it. A three-judge panel decided that the program clearly violated the United States’ obligation not to return asylum seekers to danger, which is known as refoulement in international law. The judges held:

Uncontradicted evidence in the record shows not only that asylum officers implementing the MPP do not ask whether asylum seekers fear returning to Mexico. It also shows that officers actively prevent or discourage applicants from expressing such a fear, and that they ignore applicants who succeed in doing so…Uncontradicted evidence also shows that there is extreme danger to asylum seekers who are returned to Mexico…It is clear from the text of the MPP, as well as from extensive and uncontradicted evidence in the record, that the MPP violates the anti-refoulement obligation embodied in” US law.

Wednesday’s order is the latest in a string of Supreme Court decisions that have allowed the Trump administration to enforce the harshest parts of its immigration agenda. In another reversal of a lower-court decision, the court in September allowed the administration to block people from receiving asylum if they passed through another country on their way to the United States, a policy that effectively ended asylum at the southern border. (People fleeing persecution remain eligible for other forms of protection that are much harder to obtain.)

In January, a 5-4 vote allowed Trump to enforce his “public charge” rule, which is effectively a health and wealth test that blocks people deemed likely to use modest amounts of public benefits from obtaining green cards. In February, it allowed the rule to go into effect in Illinois, the only state where it remained blocked.

“Today’s decision follows a now-familiar pattern,” Sotomayor wrote in a dissenting opinion last month. “The Government seeks emergency relief from this Court, asking it to grant a stay where two lower courts have not. The Government insists—even though review in a court of appeals is imminent—that it will suffer irreparable harm if this Court does not grant a stay. And the Court yields.”