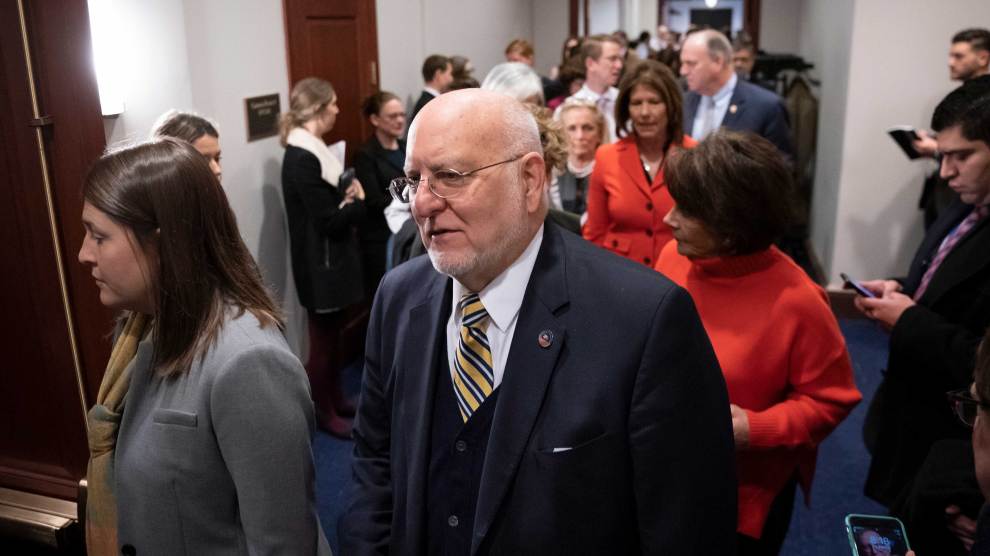 While President Donald Trump rambled his way through an extremely weird visit to the Centers for Disease Control in Atlanta on Friday, the lineup of serious-looking scientists behind him was supposed to inspire confidence that there are trustworthy and qualified people leading the nation’s response to the deadly coronavirus. But as the CDC, the central agency in charge of public health, struggles to get a handle on key messaging and coronavirus testing efforts, the credentials of its director Robert Redfield are in the spotlight.

From the start of his administration, Trump has struggled to fill top positions with qualified candidates; the world of people who can do a particular job and who show enough personal or political loyalty is often quite small. Redfield, 68, is a well-known virologist who spent decades working on HIV/AIDS research in the military and as the head of the University of Maryland’s Institute of Human Virology. He also has a long history of being a close ally to conservative politicians and their pet theories on HIV and AIDS.

In the 1980s and early 1990s, as an Army doctor stationed at Walter Reed Medical Center, Redfield worked on setting up protocols to handle service members infected with AIDS. Even by the standards of the era, when much was still unknown about the virus, his suggestions were controversial. He advocated quarantining infected soldiers, spreading their diagnosis across the chain of command with little concern for their privacy, and investigating their sexual histories.

Even by the standards of the era, when much was still unknown about AIDS, Redfield’s suggestions were controversial.

Redfield advocated similar ideas outside of the military, aligning himself with a conservative Christian group called Americans for a Sound HIV/AIDS Policy (ASAP) which supported similar steps in the general public (mandatory testing and quarantines) to control the spread of the virus. According to Foreign Policy, in the introduction of a book by ASAP’s founder, Redfield rejected the medical norms for handling the epidemic and called for a more faith-based approach:

“It is time to reject the temptation of denial of the AIDS/HIV crisis; to reject false prophets who preach the quick-fix strategies of condoms and free needles; to reject those who preach prejudice; and to reject those who try to replace God as judge. The time has come for the Christian community—members and leaders alike—to confront the epidemic,” he wrote. Redfield named the breakdown of family values and increasing number of single-parent households as key factors responsible for the spread of AIDS.

In the 1990s, Redfield endorsed an unproven HIV vaccine as a huge breakthrough. It wasn’t, and Redfield was investigated for scientific misconduct for his role in continuing to push the vaccine. (He was later cleared of accusations of misconduct.) He also publicly lobbied for legislation sponsored by a conservative member of Congress that would force medical workers to get tested for HIV and AIDS and lose their licenses to practice if they were infected. More recently, in the early 2000s, Redfield remained adamant that the best way to contain the AIDS epidemic in Africa was to encourage abstinence, monogamy, and the use of condoms only as a last resort.

Redfield was not the Trump administration’s first choice for CDC director; she resigned after she was found to have traded tobacco stocks while running the CDC. Despite loud calls from CDC watchdogs like the Center for Science in the Public Interest, which accused Redfield of having a bad record “and an extreme religious agenda,” Redfield was appointed in 2018.

Critics say that even as CDC officials have worked towards improving the agency’s handling of the current outbreak, Redfield has enabled Trump’s politicization of the government’s response. At a press conference last week, when asked about why the CDC’s system for rolling out tests has faltered, Redfield offered:

“So, in the past, we used to be able to have laboratories that could develop what we call ‘laboratory developed tests’ and then be able to apply them for clinical purposes. And in the previous administration, that became regulated so that, now, for someone to do that, they had to formally file with the FDA.

And what the President’s decision did was allow that regulatory relief now and that those university labs and those other labs in this country now can be fully engaged in developing laboratory diagnostics for the clinical arena so the men and women in this nation can get access to—and the doctors —to get to know the extent of HIV in the patients that they’re caring for. It’s, really, very important. It’s what’s changed the availability of testing overnight.”

That Trump overturned a previous FDA rule to allow for easier testing does not appear to be true. But it was the setup Redfield’s boss needed to declare: “I just want to add, if I might—and to go a little bit further—the Obama administration made a decision on testing that turned out to be very detrimental to what we’re doing.”