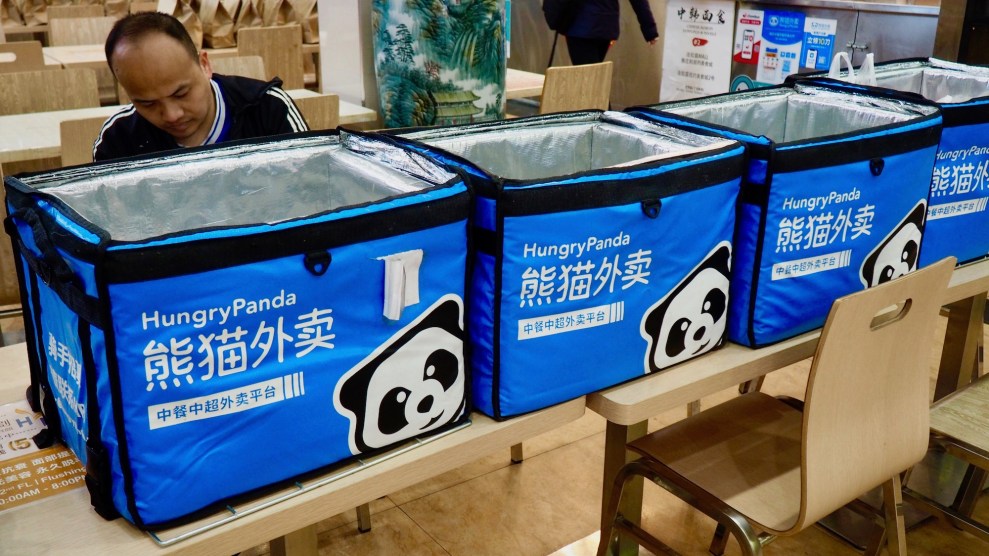 A man waits for orders to fill boxes for the delivery app HungryPanda.Noah Lanard/Mother Jones

When the Flushing Chamber of Commerce met last Wednesday, the Knicks were about to tip off against the Hawks, Broadway was open, and a St. Patrick’s Day parade was set for Tuesday. But the situation in Queens’ main Chinatown was already dire: John Choe, the chamber’s executive director, said food courts were deserted and business at local restaurants was down by half or more. Choe announced a “solidarity lunch” that would be held at a Taiwanese beef noodle soup spot on Monday to help support the struggling restaurants.

A few dozen, mostly Asian-American New Yorkers had gathered at the historic St. George’s Episcopal church—which has withstood many catastrophes since it was established in 1702—to discuss what could be done to help neighborhood businesses survive the impacts of the new coronavirus. Todd Leong, the sharply dressed co-owner of the Leaf Bar & Lounge atop Flushing’s Hyatt Place Hotel, took the mic and offered to hold a party to show the media that it was alright to go out. “I don’t know,” he said, unsure of how else he could help. “It’s an idea.” (By Sunday, the Leaf Bar & Lounge would be voluntarily shut down to help stop the spread of coronavirus.)

A woman, who spoke with endearing nervousness, proposed an elaborate plan to teach older people to use food delivery apps. A Korean-American bank manager said it was time to stop the hysteria, floating the idea of a “Purell party” that would bring together a clean-handed group to show that people could still safely gather.

The suggestions were made with admirable earnestness, but it was also painfully clear that the proposals would do far from enough for restaurants’ bottom lines and, worse, could spread the virus. Their efforts took place before most businesses had come to grips with the fact that this crisis could not be addressed by messaging or marketing. Indeed, Chinatowns in Flushing and across the country foreshadowed what the restaurant industry everywhere would come to look like in the age of coronavirus: layoffs, shuttered businesses, and potential bankruptcy.

Listen to Noah Lanard tour the hard-hit immigrant community of Flushing, New York City, where widespread closures could permanently endanger a food-lover’s paradise, in this edition of the Mother Jones Podcast.

Flushing was home to 72,000 people as of the 2010 Census, nearly 70 percent of whom were Asian and two-thirds of whom were born abroad. It is known for its mom-and-pop shops run by Chinese immigrants. But over the past decade, it has seen more luxury condo development than all but one New York neighborhood, Williamsburg in Brooklyn, according to data published by the New York Times. Choe said that commercial rents can now exceed parts of midtown Manhattan. The last stop on New York’s 7 train, Flushing is normally packed with locals, as well as food tourists from across the city. Both groups have been staying away.

James Chen, the founder of a delivery app called GoHive, told me last week that half the stalls at one Flushing’s main food halls had already closed. Chinese immigrants were growing fearful from what they saw happen in their homeland, as well as the sometimes misleading information spreading on the messaging platform WeChat that made the virus seem even more deadly than it already is. Another problem was that many American news outlets had used photos of Flushing to illustrate stories about the coronavirus, feeding the false impression that the neighborhood of small businesses and apartment buildings was at the heart of the pandemic. I had been one of those food tourists from Brooklyn two months ago, when I’d angled for a table in the packed New World Mall food court; now there appeared to be more staff than patrons.

After I got home last Wednesday, NBA commissioner Adam Silver suspended the league’s season and Governor Andrew Cuomo announced the cancellation of the St. Patrick’s Day parade. On Thursday, Broadway closed, too. And the stock market closed the week down nearly 10 percent, despite Friday, when President Donald Trump finally declared a national emergency, ushering in the best day for stocks in more than a decade. But Joe DiStefano, a food writer whom I met at the meeting, kept an eating tour of Flushing on for Saturday.

When we met up over the weekend, he wore a flat brimmed hat with “Queens” on the front and “Nueva York” across the back. DiStefano and a few other foodies—two of whom brought handheld lights for photo taking—made their way through a parade of dumplings and noodles. He and Hannah Goldberg, a classically trained chef who started a catering company, Tanabel, that serves food cooked by refugee women, disagreed over the strength of a chopped noodle dish. He liked how unusual it was; she compared it to Hamburger Helper. They agreed on the strength of the pastries at New Flushing Bakery before parting ways.

Even though everyone had been careful not to shake hands or share utensils, the tour defied the recommendations on social distancing from the Centers for Disease Control and Prevention. But DiStefano felt a deep loyalty to the businesses that have made his livelihood possible.

Podcast producer Molly Schwartz and I returned to New Word Mall food court after DiStefano’s group departed. Timmy Chen, who runs a stall called Shanghai Taste, held up the metal spike he uses to impale paper order tickets. He had only about 20 tickets at a point in the afternoon when he should have had 80. Keeping the stall open costs at least $25,000 a month, but between March 1 and March 14 he’d made only $6,000. Daily business was down from about $1,200 to $350, and he estimated that at this rate he’d only be able to remain open for another month or two.

His family lives outside Washington, DC, in Maryland, where Governor Larry Hogan has closed schools and activated the National Guard. They have another Shanghai Taste restaurant in Rockville, this one in a strip mall sit down establishment known for its soup dumplings. He’d just heard business was similarly bad there. He picked up his phone to show me photos of the empty shelves at a Whole Foods in DC. They were taken right after Trump spoke on Friday, he said.

On Sunday night, Mayor Bill de Blasio announced that New York restaurants would have to stop sit-down service by Tuesday. When I called Choe, from the Chamber of Commerce, after the announcement, he said small businesses in Flushing were already struggling before coronavirus hit. He feared that the coronavirus would be the death blow for many of them, estimating that up to half of the places that are closing would never reopen. Some, he’s heard, are only staying open to sell the food they’ve already bought. They will likely sit vacant or be replaced by more of the chains from China and the United States—like Haidilao for hotpot or Sonic for burgers—that have already been moving into Flushing.

Choe, who has lived in Flushing for about 15 years, said the neighborhood managed to thrive during the Great Recession. This time is looking different. He’s hoping the government will declare the crisis a natural disaster so that more aid will flow to business owners. New York City has already announced an up to $75,000 zero-interest loan program for small business owners, but Choe said the details on how to apply are not yet available. For many businesses, he added, $75,000 would only last about about two months. The situation for their workers is likely to be even worse. Choe worried they’d wind up homeless or dependent on the food bank that also operates out of St. George’s.

When I caught up with Timmy Chen on Monday, he was still making sense of de Blasio’s announcement on restaurant closures. Maryland was also ending sit-down service, meaning his two restaurants will be further underwater. Carry out was a possibility in both places, but that was only about 20 percent of his sales in New York. It’s not enough.

I asked him what he would he would do. “No plan, my friend. No plan,” he replied. “Nothing I can do, you know.” I could hear him laughing over the phone. He seemed in oddly good spirts despite it all.  Later that day, he decided to close the New York outpost. By the time we spoke on Tuesday, he was already back home in Maryland, where he’s still doing takeaway. At least, for now.