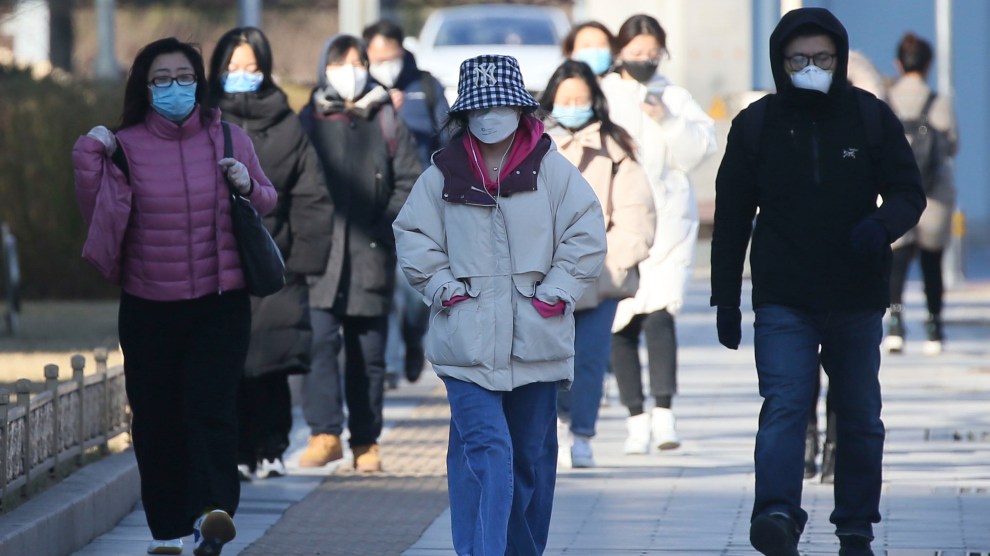 Mask-wearing people on a street in Beijing, China on March 4, 2020, amid an outbreak of the new coronavirus COVID-19.AP

For many of us, the scariest part of the coronavirus outbreak is what we don’t know—how severe the virus is, how it’s transmitted, what we can do to stop its spread. “The many unknowns about the virus impede efforts to predict its trajectory,” the Washington Post recently reported.

But what many outlets don’t mention is that there are many things we actually do know. In February, about two months after the initial outbreak in Wuhan, China, the World Health Organization sent a team of 25 leading public health experts, epidemiologists, and infectious disease specialists to several cities in China to collect data. The report that they produced is publicly available, and its revelations are sobering. The authors found that the vast majority of people who test positive for the disease do end up developing symptoms, most commonly fever and a dry cough. For people under 59 years old, the fatality rate is 1.3 percent; for people over 80, it’s nearly 15 percent. The team found that 5 percent of coronavirus patients required ventilators to breathe. Another 15 percent needed highly concentrated oxygen, sometimes for weeks. Contrary to some US media reports, most health care workers in China seem to have caught the virus not from their patients but from family members.

“My biggest fear is that at the highest leadership levels in the United States, we’re not prepared for this.”

For perspective on the report, I called Hernando Garzon, an emergency medicine physician who directs Sacramento’s EMS agency. Garzon has spent the past two decades of his career studying international preparedness for outbreaks and other disasters—most recently, he oversaw the opening of two Ebola treatment centers in Sierra Leone. Garzon found the WHO report so jarring that he emailed his colleagues to underscore its importance. “It’s a tremendous amount of exquisite detail,” he said.

Beyond the valuable information about the disease itself, Garzon said, there is another reason Americans should pay attention to the WHO report: It highlights the drastic measures China has taken to contain the virus. “China’s bold approach to contain the rapid spread of this new respiratory pathogen has changed the course of a rapidly escalating and deadly epidemic,” the report’s authors wrote. “In the face of a previously unknown virus, China has rolled out perhaps the most ambitious, agile and aggressive disease containment effort in history.”

For starters, the report notes, China moved quickly to trace the contacts of every identified coronavirus patient. In Wuhan, 1,800 teams of investigators were deployed to do this. The government enacted vast and strict quarantine measures and scrambled to prepare test kits. Every week the country churns out and distributes 1.6 million test kits, which deliver results in one day. These efforts made a real difference. Now, 329 new cases are identified every day—down from 3,000 a month ago.

Garzon was struck by the fact that even after the Chinese government initially suppressed reports of the virus, it quickly mobilized this highly coordinated response. He noted that the report authors weren’t sure that the rest of the world would be able to do the same. China’s success is due in part to its authoritarian government—more democratic countries simply don’t exert the same kind of control over their citizens. But beyond that, “My biggest fear is that at the highest leadership levels in the United States, we’re not prepared for this,” Garzon told me. “Having lost the pandemic preparedness in the White House, I don’t believe that at a federal level the disaster preparedness is what it has been in the past, and even in the past it had left something to be desired.”

William Haseltine, chair of the global health think tank ACCESS Health International and an infectious disease expert, echoed those concerns. Like Garzon, he found the WHO report sobering—the United States would have a hard time matching China’s response, he said. “It’s a sad day when China is outperforming the US in terms of public health.”

Garzon noted, given the vastly different capacities for mobilizing a work force, some of China’s preparations would be nearly impossible to replicate in the United States. Most impressively, the Chinese government hastened to build new hospitals to treat severe cases. In Wuhan alone, Chinese workers constructed—from scratch!—two new facilities to hold an additional 2,600 hospital beds in a matter of days. “People are marveling at that,” Garzon told me. “Construction workers were working all night. That’s something I don’t think the United States could do.”

But other steps that China took—the contact tracing, the test kits, perhaps even the quarantines—are entirely within the realm of the United States’ capability, if the government were inclined to devote the necessary resources. “It’s not technically all that difficult to do these things,” he said. “It’s just a matter of whether the government takes action.”

Haseltine notes that all of this would be a lot easier if the United States had invested in outbreak preparedness measures before a crisis. As I wrote a few weeks ago, the Trump administration has hardly made this a priority: It did away with pandemic leadership, shelved a biodefense plan, and slashed emergency preparedness budgets.

One helpful step, Haseltine said, would be training social workers to help with disease surveillance and intervention. “Social workers understand what the vulnerable populations are and how to communicate with them,” he said. “They need to be trained and integrated into our medical system.” He also underscored the importance of the federal government creating incentives for pharmaceutical companies to develop drugs.

When there isn’t an active epidemic, of course, it’s hard to convince governments to invest in preparedness—and Garzon hopes the coronavirus will spur leaders to action. “My personal experience is that there is always something more pressing to accomplish today, so emergency preparedness sits on the back burner,” he said. “Let’s hope that this will serve as a wakeup call.”