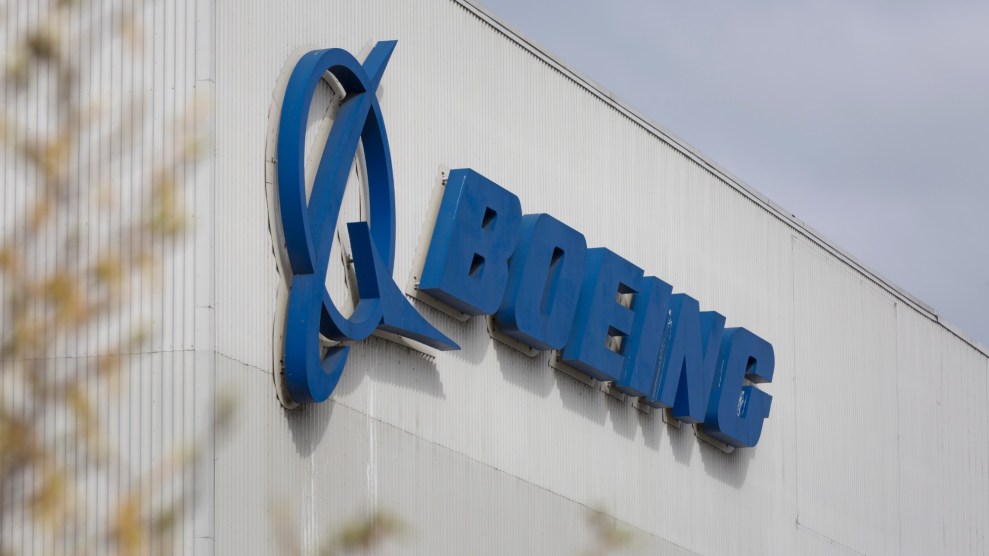 A brutal 2019 for Boeing was turning into an even more torturous 2020. After weathering the enormous cost of grounding its scandal-plagued 737 Max jets, Boeing stood to lose even more money from the devastating impact of the coronavirus crisis on airlines.

Then the Pentagon stepped in to help. Unlike its competitors in the aviation industry, Boeing brings in roughly a third of its revenue from defense, bolstered in large part from $28 billion in contracts with the federal government. And now it has the Pentagon to thank for a nearly $1 billion windfall, which will help fill Boeing’s coffers during the most turbulent period for the economy since the Great Recession.

On April 2, Boeing reached an agreement with the Air Force to receive $882 million in funding for a fleet of KC-46 refueling planes. The government had previously withheld those funds due to widespread flaws discovered in the first tankers Boeing delivered last year. Boeing’s production schedule had been delayed for months before then to resolve problems with the aircraft, including issues with the pilot’s vision control that led the refueling aircraft to occasionally collide with a nearby plane and a severe fuel leak that made the tankers all but unusable. When the Air Force received its first four of an eventual 179 tankers from Boeing last year, officials withheld more than $26 million per plane, roughly 20 percent of the total cost, until the flaws were resolved at the company’s expense. The move was intended to “incentivize Boeing to deliver KC-46s that meet all specification requirements in the contract,” an Air Force statement said in July. By the end of last year, the Air Force had only received 30 tankers, but the problems persisted.

As recently as last month, the Air Force’s top general told Congress that the aircraft was not fit to be used for “day-to-day operations” and would only be used in an emergency. As part of the deal announced last week, the Air Force can reinstate financial penalties if Boeing does not improve its aircraft after four months, but it’s clear that the agreement functions more as coronavirus relief than an incentive for Boeing to get its act together.

Ann Stefanek, an Air Force spokesperson, even said the decision aligned with the department’s effort “to maximize cash flow, where prudent, to combat coronavirus impacts on the industry base.” Somehow the Air Force believes the possibility of penalizing Boeing in the future will be enough to spark improved behavior from the same contractor that spent nearly half of its profits on stock buybacks between 2013 and 2019. Will Roper, a different Air Force spokesperson, told reporters last week that these potential penalties should keep keep Boeing in line. “Have we given up our leverage?” he said. “No, I think we’ve used it well.”

Nearly $1 billion from the Pentagon would be welcome anytime, especially during an economic crisis, but it’s only a fraction of what Boeing wants from Congress. The company requested $60 billion for the aerospace industry, which even board member Nikki Haley, Trump’s former US ambassador to the United Nations, thought was laughable. She resigned from the board in protest. But Boeing won concessions from the government in other ways. The $2 trillion stimulus package approved last month includes a $17 billion loan program that “does not mention Boeing by name but was crafted largely for the company’s benefit,” the Washington Post reported. A push from the Pentagon’s contracting office to shore up support for its industry allies has benefited Boeing too. Last week, the department installed a progress payment plan that ensures contractors receive more money at an earlier point than they normally would, which the Pentagon estimates will lead to an injection of $3 billion in cash into the industry.

Todd Harrison, director of Defense Budget Analysis at the Center for Strategic and International Studies in Washington, told me that the Pentagon had actually intended months ago to reduce progress payments as part of a strategy to keep defense contractors in line. The proposal, which the Pentagon unveiled in 2018 and was immediately bashed by defense firms, would “create a tiered system that recognizes high performing companies with higher performance-based payments,” Defense News reported. Now because of the coronavirus, the Pentagon has gone in the complete opposite direction.  “The effect is: more money will be going out to contractors sooner, so it will help their cash flow,” Harrison said. Most defense firms have continued completing defense work for the government despite the threat posed by workers coming into close contact. In recent weeks, Boeing had to briefly shut down its civilian airliner plant in Seattle and halt work at a defense production facility outside of Philadelphia while the National Defense Industrial Association, which advocates for the industry, called on the Pentagon to release $160 billion in additional funding for defense firms.

No matter how much more money Boeing receives in coronavirus relief, some critics of government waste believe the aerospace giant has already had more than its fair share. “Boeing has definitely come out ahead in all of this,” says Dan Grazier of the Project on Government Oversight. Items on the company’s wishlist, such as getting its full payments for the KC-46 tankers, are already coming to fruition, and, thanks to President Trump’s recent decision to axe the inspector general assigned to oversee the release of the funding, money defense firms receive from Congress’ recent spending spree likely won’t be subjected to any form of independent accountability from the government.