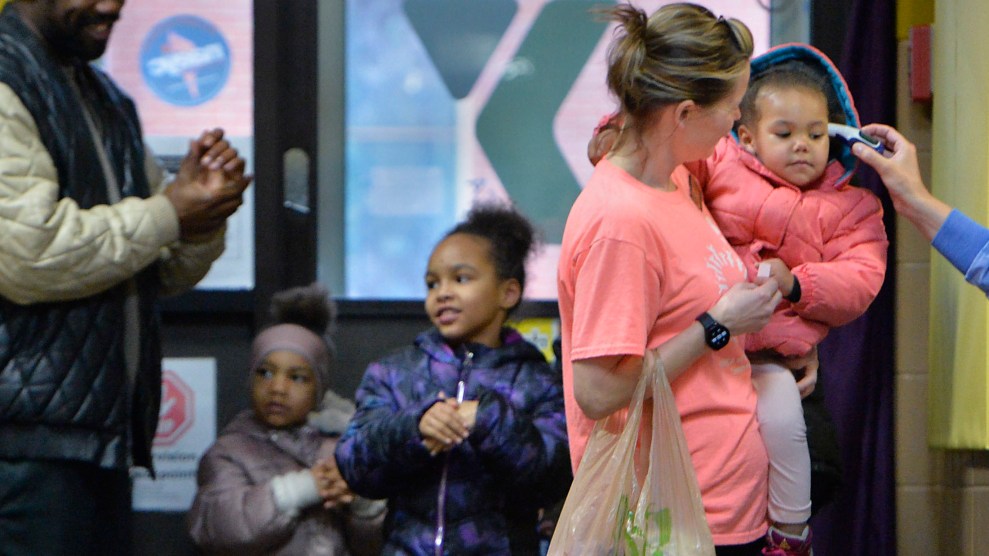 A month ago, my 4-year-old’s day care closed to slow the spread of the novel coronavirus. Upon hearing this news, I did not exactly jump for joy. How on earth would my husband and I entertain him and our 1-year-old daughter all day while also doing our full-time jobs? But we knew our beloved day care had made the right decision, doing its part to flatten the curve. We explained to our 4-year-old that school was closed, that his teachers and friends were staying home, too, to make sure everyone stayed healthy. Someday, we told him, he would be able to go back to school—but not just yet.

We were just settling into the daily bedlam when, at the end of March, the day care management sent us an email with an announcement: They planned to reopen in April—right when cases of coronavirus in our home state of Georgia and other parts of the country were expected to peak. We were confused, especially considering public schools in Atlanta, where we live, will be closed for the rest of the year. I asked around and found out that our day care isn’t the only one reopening—several others have already done so.

When I emailed our day care’s management to ask how they decided to reopen and what their plans were once they did, they assured me that the state agency in charge of day cares said it was entirely safe. They would adhere strictly to the state’s rules, which would ensure a secure environment for the kids and the staff. I was curious about the rules, so I followed the link in the email to the state of Georgia’s FAQ about how Gov. Brian Kemp’s shelter-in-place order applies to day cares.

It turned out, the “rules” are more like vague guidelines. The only actual requirement is that classrooms must be separated by full walls, and that class size must be capped at 10 students. The guidance explains that this number of students is in keeping with the shelter-in-place rule that allows gatherings of 10 people or fewer, as long as the participants stayed 6 feet apart. Good luck, I thought: As any parent can attest, babies and toddlers are not exactly known for their ability to respect personal boundaries. The idea of keeping 10 crawling 1-year-olds or rambunctious 4-year-olds from hugging, bumping up against, or licking each other seems well nigh impossible, let alone keeping them 6 feet apart.

Keeping 10 crawling one-year-olds or rambunctious 4-year-olds from hugging, bumping up against, or licking each other seems well nigh impossible.

Beyond the 10-student limit, the guidance offers a few more recommendations: Day cares should limit the number of staff that interact with each classroom and continue “basic health and safety practices such as handwashing and cleaning and disinfecting surfaces that could possibly pose a risk to children and teachers.” As a precautionary measure, it says, day cares might institute “daily temperature checks on visitors and children”—despite abundant evidence that people can transmit the virus days or even weeks before they show symptoms.

What happens should there be a case of COVID-19 at a day care? Unfortunately, there aren’t any real rules about what to do—just a suggestion that management contact the public health department.

If Georgia’s guidelines for day cares seem loose and arbitrary, well, it’s because they are. The Hunt Institute, an education research group, tracks states’ policies for day cares during COVID-19 and found that they vary widely. Some states—including Massachusetts, Ohio, and Oregon—have closed all day cares, with a few exceptions for children of first responders. Other states—Georgia, Iowa, and Louisiana, among others—allow day cares to remain open with limits on the number of children per classroom—in some states it’s 10; in others it’s 11 or 12. Some states—including New York and Alaska—have no rules at all: Day cares can remain open as usual, if they choose. In general, those rules don’t line up with the guidelines for K-12 schools. Many of the states where day cares are allowed to operate as usual—New Mexico, for instance—have closed public schools for the rest of the academic year.

The discrepancy between public school and day care closures bugs Aaron Carroll, a University of Indiana pediatrician who recently wrote about school closures in the New York Times. “There is no reason to believe day care is less of a risk than school— it’s probably more of a risk,” he told me. That’s because there’s evidence that coronavirus spreads through feces, so diaper changes are an added danger. Keeping day cares open, he said, “could lead to a nightmare scenario.” Columbia University virologist Angela Rasmussen echoed his concerns. She wrote to me in an email, “Limiting class sizes to 10 won’t be effective in stopping spread, since children are much less likely to be compliant with physical distancing.”

My family is lucky: We can keep our kids home. But what about first responders like doctors, nurses, health care workers, law enforcement, and even grocery store workers? Creative people are devising plans to provide care while minimizing risk: In Minnesota, for example, medical students have organized a network of 350 volunteers to take care of first responders’ children. The model is quickly spreading to other states.

But a couple of hundred volunteers aren’t going to be able to meet the overwhelming need for child care—which is why, Carroll said, a robust pandemic preparedness plan must include a safe option for the hundreds of thousands of children of first responders. The fact that there is none—and that day cares are left to make their own decisions—is a profound failure on the part of state and national leaders, he said. “We’re a several months into this, and we still don’t have a plan for first responders,” he told me. “We desperately need one.”

When I first heard that our day care had decided to reopen, I was furious. There seemed to be no question that this decision would put children, teachers, and our neighborhood at risk. But the more I thought about it, the more I saw what an impossible position they were in: If they stayed closed, no one would help those who needed help the most get through this mess. The federal government bailed out the airlines—where were the billions of dollars to keep struggling day cares afloat?

At the very least, they need science-based rules that will allow them to reopen safely. Our day care teachers excel at their job: feeding, nurturing, and teaching our children while we’re at work. But fending off a novel virus has never been part of the job description. Without strong leadership informed by public health science, they’re flying blind—and our entire community could pay the price.