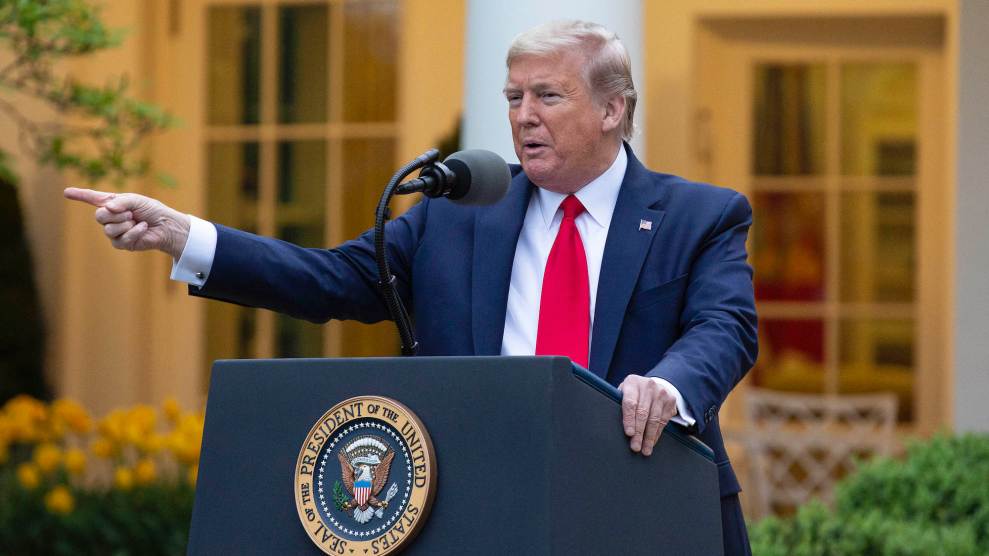 Soon, President Trump will decide whether he will reopen the country on May 1—or earlier. This is a decision that has literal life-or-death consequences, and it’s already becoming clear Trump plans on doing what is his habit: hyping the drama of the decision like he is previewing next week’s episode of his reality show (even if it’s unclear what he even has the authority to reopen).

There is no real choice here. As eager as Trump is for a quick economic rebound, public health officials have been clear that easing social distancing measures too soon would result in a spike of more deaths.

“You’ve got to be realistic and you’ve got to understand that you don’t make the timeline,” Dr. Anthony Fauci, director of the National Institute of Allergy and Infectious Diseases, told CNN last week. “The virus makes the timeline.”

But Trump can’t resist a spectacle. Last Friday, in his daily press conference, Trump teased the decision about whether to begin to reopen the economy May 1. (Never mind that May 1—a Friday—is a completely arbitrary date.) “I’m going to have to make a decision, and I only hope to God that it’s the right decision,” he said. “But I would say without question it’s the biggest decision I’ve ever had to make.”

Trump promised an “opening our country council,” which will include the “greatest minds,” “great business leaders,” and “great doctors” advising him. It’s unclear who from the business community is willing to serve on it outside of his Cabinet officials and advisers.

We’ve seen all this before. An early example of Trump’s Apprentice-style approach to the presidency was when Trump was weighing his options on the Paris climate agreement. The decision-making process turned into a high-stakes contest between members of his Cabinet who publicly made their cases on whether the United States should leave or stay. Several, like his then-EPA administrator, Scott Pruitt, took to Trump’s favorite channel, Fox News, to audition their arguments for the commander-in-chief. After weeks of reports that Trump was waffling, he held a Rose Garden press conference in which he announced the US would exit in three years time. The eventual winner of the contest was Pruitt, who joined him at the podium for the announcement.

He has also turned the once staid State of the Union into a theatrical event. As David Graham wrote of Trump’s most recent address in the Atlantic: “In an emotional peak, he praised an Army wife whose husband was deployed to Afghanistan—then announced, to her surprise and that of those watching in the chamber and at home, that her husband had actually returned home, making the family reunion a national TV event.” At other times, as the New York Times observed, he has courted and narrowed the pool of Supreme Court nominees in a process that “so mirrored ‘The Bachelor,’ several folks quipped, that Mr. Trump would ask his nominee, Will you accept this robe?”).

Trump is obsessed with ratings above else, but now he’s gambling directly with people’s lives.

Instead of giving the country a measure of calm and direction, Trump has set off a familiar situation with this artificial May 1 deadline. There have already been rounds of will-he-or-won’t-he headlines about Trump’s decision, recounting who is for and against reopening the economy and internal divisions over the matter.

Recently, Trump has set up a dramatic showdown with (mostly) Democratic governors, including those on the East and West Coasts who have established multi-state coalitions to coordinate their COVID-19 responses and determine when and how to restart their economies. Trump has claimed he holds the authority to override their decisions, tweeting Monday: “For the purpose of creating conflict and confusion, some in the Fake News Media are saying that it is the Governors decision to open up the states, not that of the President of the United States & the Federal Government. Let it be fully understood that this is incorrect.”

On Tuesday, he backed down, telling reporters, “I’m not going to put any pressure on any governor to open.”

The polarization and hype play to Trump’s base. At a time when his only priority should be rescuing the nation, it’s clear he is focused largely on rescuing his ratings.