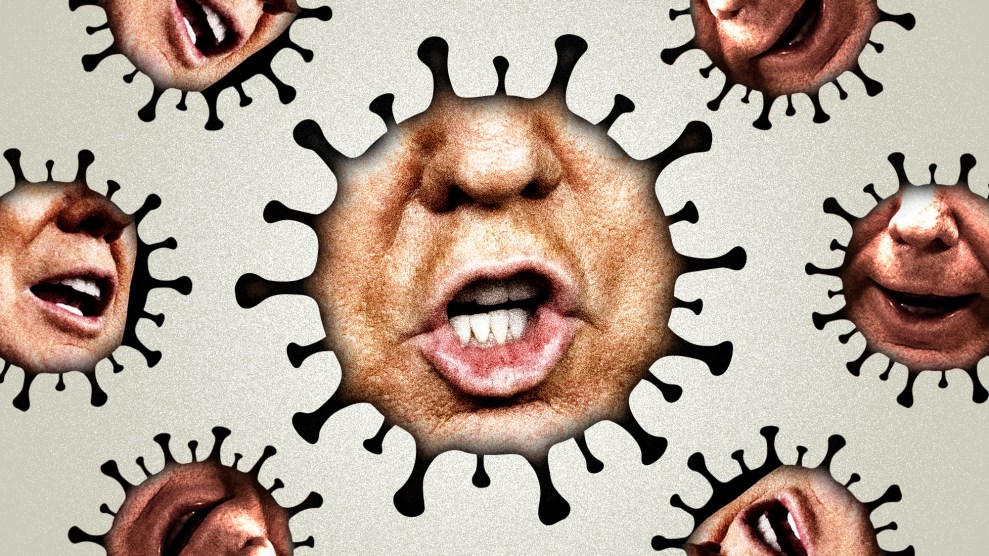 A virus can adapt quickly, and so can Donald Trump.

Through the course of the coronavirus crisis, Trump has demonstrated the adaptability that has so often helped his career in business and politics, as he shifted from predator developer to scammy brand-marketer to reality-TV celebrity. And one element of that flexibility is Trump’s unparalleled capacity to say whatever he needs at a given moment to gain an advantage or serve a personal interest.

This skill, if it can be called that, was on display at a recent Trump campaign rally, which these days are held daily in the White House, where Trump and members of his coronavirus task force brief reporters and the rest of the world. (Trump has been bragging about the ratings for these briefings, cheering his audience numbers, as Americans perish.) When Trump at this particular session on Sunday wasn’t bashing the media, belittling his perceived foes, or praising himself, he made a startling remark: “So you’re talking about 2.2 million deaths, 2.2 million people from this. And so if we could hold that down, as we’re saying, to 100,000. It’s a horrible number, maybe even less —but to 100,000. So we have between 100 and 200,000, and we altogether have done a very good job.”

At this briefing, Trump 16 times pointed to the 2.2 million estimate. That number comes from a new British study that Trump’s health care advisers had shown him that projects this level of death in “the (unlikely) absence of any control measures or spontaneous changes in individual behaviour.” That is, without social distancing, testing, and the like. (Trump’s experts had put this report in front of him so he would see that his idiotic idea to ease social restrictions by Easter would cause hundreds of thousands of deaths.) Trump, who on February 26, when there were 15 reported coronavirus cases in the United States, said the number would soon be “down to close to zero,” was now tossing out a horrendous number. It was quite the turnaround—and very purposeful.

It appeared Trump had finally realized that the amount of coronavirus death in this country on his watch is going to be astronomical. His weeks of denial, inaction, and dangerous happy-talk—downplaying the threat, claiming the virus would disappear in better weather, saying it was no worse than the flu, hinting social restraints could soon be lifted—had done nothing to stop the lethal threat spreading across the country. (A virus can’t be stopped by BS.) Trump, who originally worried that bad coronavirus numbers would spook the markets and undercut his the-economy-is-great! reelection argument, needed to pivot. To adapt.

Now that Trump could no longer pitch himself as the beautiful-economy president, he recast himself as the great lifesaver of America. And he initiated a cynical and loathsome expectations game. If the coronavirus might kill 2.2. million, then what a hero he would be if it only claims the lives of 200,000 Americans. Should this come to pass, Trump will claim that 2 million Americans owe him their lives.

Trump the coronavirus savior—that’s his new role. At this particular briefing, he claimed that some advisers—no names, of course—had urged him to ride out the crisis and do nothing: “Just ride it. Ride it like a cowboy. Ride that sucker right through.” And Trump proudly took credit for not following the dumbest advice imaginable. In fact, Trump portrayed his (eventual) unwillingness to do nothing as a courageous act that will prevent the death of 2.2 million. He repeated this line at the Tuesday press briefing, repeating the nutty notion that “a lot of people were saying just ride it out.” He added, “Think what would happen if we didn’t do anything.” Imagine a firefighter boasting of not standing by and watching a building burn to the ground.

Of course, Trump had not rushed to the fire. He completely botched and bungled the first weeks of the crisis, with a stretch of neglect and screwups that will likely lead to the deaths of thousands of Americans, if not more. But as a reality-TV president more focused on PR than policy, he believes he can rewrite the script as the first act plays. Like a virus, he can change with no regard of past actions. At that Tuesday briefing, Trump appeared more somber than usual and deferred to the experts to discuss the projected death tolls—though he did suggest he deserved praise for “the job that’s been done.” (Trump is well skilled in goal-post-shifting. He did this repeatedly through the Russia and Ukraine scandals. For instance, he defined wrongdoing in the Russia controversy as only direct collusion between his circle and Moscow’s attack on the 2016 election; this drew attention from his actions and those of his campaign that aided and abetted the Russian assault.)

There is a limit on Trump’s mutability: his deeply rooted pathologies. As Trump has tried in recent days to demonstrate (intermittently) that he comprehends the gravity of the crisis and is heeding the recommendations of the experts, he has been unable to restrain his never-ending flow of dark impulses. He spent days attacking Michigan Gov. Gretchen Whitmer, a Democrat, and threatening other governors. (“If they don’t treat you right, I don’t call.”) Here he was yielding to his obsession with revenge and his fixation on petty grievances—even though it possibly could cause Michigan voters to view him negatively. Trump won Michigan in 2016 and will need a victory there in 2020 to keep his hold on the White House. The smart political move would be to avoid alienating Michigan voters. Yet Trump could not stop his warped psyche from winning the day.

Trump is now attempting to set the stage for a grand finale in which he can claim victory and demand reelection while standing on the corpses of 200,000 or so dead Americans. This will be an absurd argument but the nation has already seen a flood of absurdity from Trump and an overflow of credulity from his cultlike followers. Still, meeting his own 200,000-dead mark of success could (unfortunately for the nation) be an arduous task for Trump. On Monday, Dr. Deborah Birx, the response coordinator for Trump’s coronavirus task force, appeared on NBC’s Today show and said, “If we do things together well, almost perfectly, we could get in the range of 100,000 to 200,000 fatalities.” And she added, “We’re not sure all of America is responding in a uniform way”—meaning we are not doing things almost perfectly.

If Birx is correct, Trump might have outsmarted himself by establishing 200,000 as his ghoulish I-win benchmark, for her grim prediction reaches higher in the real world where the response is not almost perfect. (Where are the tests? Where are the ventilators? Where is the PPE? Where are the lockdown orders in areas about to be hit by coronavirus?). But Trump, the onetime owner of bankrupt casinos, appears to be betting on this 200,000 estimate. That horrific level of death will still be a tremendous tragedy for which Trump will bear partial responsibility. And the number of fatalities is likely to be higher. Should that be the case, Trump will, no doubt, adapt once more and concoct a new strain. A virus has no conscience. It only exists to survive and spread.