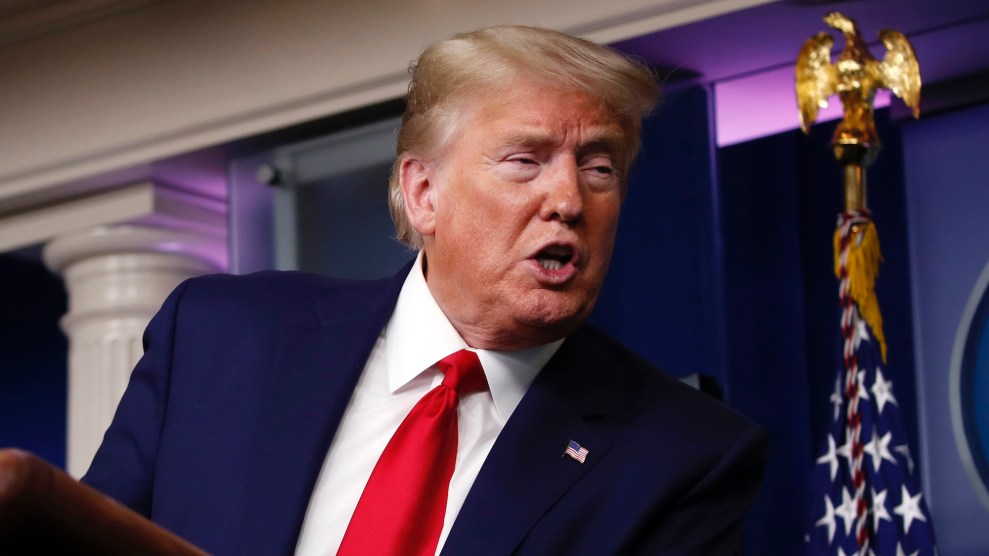 Like many hotels in America, Donald Trump’s luxury downtown DC hotel has taken a massive hit from the COVID-19 pandemic and is asking its landlord for a break on its monthly rent. But this particular property is unique in that the landlord takes its orders from the president himself.

The Trump International Hotel in Washington, DC, operates out of a federally owned property, an old post office building just blocks from the White House. In 2013, the Trump Organization signed a lease to operate a hotel in the building and promised to pay at least $3 million a year in rent. When Trump took office, he refused to sell or give up control of his businesses; he simply declared that his two adult sons and some company executives would take charge of the daily operations. The hotel has been a bright spot in Trump’s portfolio during his presidency, if not always as a business then at least as a symbol. Many of his properties have seen declines in revenue, but the DC hotel, which opened in 2016, just days before the election, injected tens of millions of dollars of new revenue into the Trump Organization and has become a popular hangout for lobbyists and foreign officials seeking to get Trump’s attention. The president himself dines at the steakhouse in the hotel’s lobby on a regular basis.

But for all the attention the hotel has gotten, in the months before the pandemic began spreading, it reportedly had an occupancy rate of around 57 percent, less than what hotel business experts say is needed to turn a profit, and the Trumps had begun shopping around their 60-year lease on the property. All that suggests that the hotel was not as profitable as it might appear. The hotel has remained open through the pandemic, unlike most other luxury hotels in DC, but with an occupancy of about 2 percent, according to an official with the hotel worker’s union.

That, apparently, is not cutting it. The New York Times reported on Tuesday that the Trump Organization has approached the General Services Administration (GSA), the federal agency that operates as landlord for the Trump hotel and other government-owned properties, about some kind of break on the rent. The Trump Organization confirmed to the Times that they had done so:

The Trump Organization is current on its rent, according to Eric Trump, the president’s son, but he confirmed that the company had opened a conversation about possible delays in future monthly payments.

The younger Mr. Trump said the company was asking the G.S.A. for any relief that it might be granting other federal tenants. The president still owns the company, but his eldest sons run the day-to-day operations.

“Just treat us the same,” Eric Trump in a statement on Tuesday. “Whatever that may be is fine.”

But will it be fine? The Times also reported that the Trump Organization has asked Palm Beach County in Florida for a break on its rent for property it leases from the county for a golf course—and that county officials are fretting that if they refuse to give the Trumps a break, they may be shorted on federal pandemic aid.

The decision will be up to the GSA, but agency officials all ultimately work for Trump. The kind of conflict of interest could have been avoided. In the lease that Trump signed in 2013, a clause prohibited federal office holders from participating in the arrangement. But after he had already taken office, the GSA determined that it did not apply to Trump, because he wasn’t a federal office holder when he signed the deal. Steven Schooner, a law professor at George Washington University who specializes in government contracting and who has long been a critic of the GSA’s decision not to apply the conflict-of-interest rule to Trump, says this is the scenario the rule was designed to prevent.

“Under no circumstances should GSA reduce the rent,” Schooner said. “Any reasonable person would worry about the undue pressures and the inherent risk of favoritism that the government might show to such a well-connected contractor.”