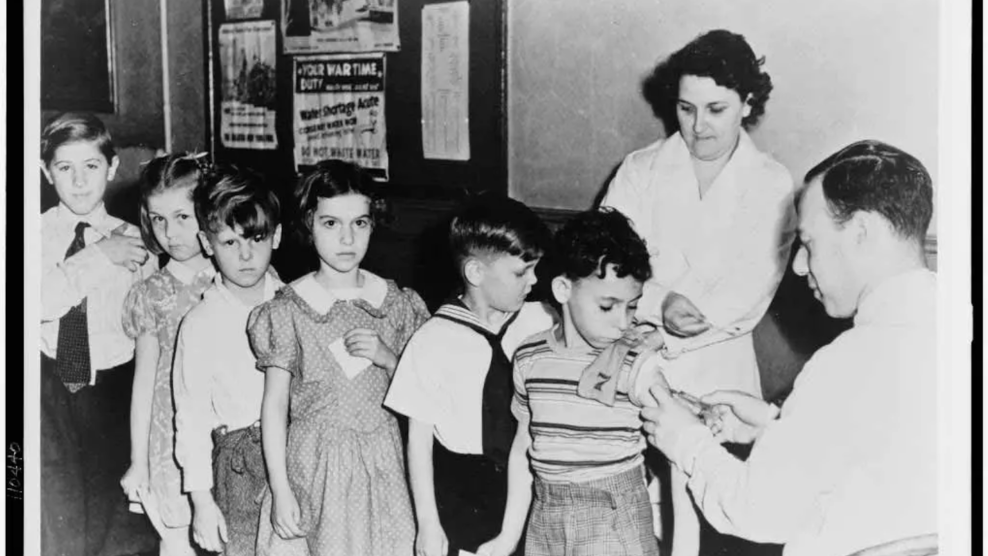 Children wait in line for immunization shots at a health station in New York City.Library of Congress

This piece originally appeared in The Bulletin of the Atomic Scientists and appears here as part of our Climate Desk Partnership.

In February 1947 an American businessman in Mexico City hopped aboard a bus with his wife and started out for Maine, reportedly to check out a farm that the woman had inherited in the town of Readfield. Traveling north, they crossed the border from Mexico into Texas, passing through cities like Dallas, Cincinnati, and Pittsburgh. Although Eugene Le Bar had started to feel sick on the bus, aspirin and headache medicine bucked him up enough during a stop in New York City for shopping and sightseeing, according to a 1947 account in the American Journal of Public Health by Israel Weinstein, then-New York commissioner of health. Le Bar and his wife checked into a Manhattan hotel on March 1.

Nine days later, he was dead.

Investigations would later show that Le Bar, who had crisscrossed two countries and spent time among the crowds in the biggest city in the United States, had died of smallpox. He was patient zero in what Weinstein said could have been a public health catastrophe.

But instead of being remembered as a mass tragedy, the 1947 smallpox outbreak ranks as a textbook example of a strong, humane, and effective public health response. The story of how New York handled the outbreak also serves as a powerful reminder of the way things are supposed to be. These days, when Americans anxiously watch as the spread of the new coronavirus causes cases of COVID-19 to spike in countries around the world, it’s all too easy to forget that the US Constitution—written almost 75 years before Louis Pasteur discovered the germ theory of disease—makes public health a state and local responsibility. (So much for Vice President Mike Pence’s new role as the national face of the US response.)

While a doctor at least briefly suspected Le Bar had smallpox, physicians initially ruled out the disease, according to a 1949 article by Berton Roueché in one of The New Yorker’s famed, decades-long “Annals of Medicine” series. The medicine Le Bar had been using could have caused the rash, Weinstein noted. Furthermore, Le Bar, who Roueché reported was a 47-year-old leather-goods merchant, had a scar from a previous vaccination—so it stood to reason that he did not have the disease. What’s more, his rash didn’t quite look like smallpox, and his wife claimed he couldn’t have been exposed to the disease. Consequently, the cause of Le Bar’s death was originally listed as a skin infection.

But then two patients in New York, a man in his twenties and a 22-month-old girl, were tentatively diagnosed with smallpox in late March.

By early April, health officials had confirmed the diagnoses at a US Army laboratory in Washington, DC, and connected the patients back to Le Bar—all three had been in the Willard Parker Hospital in Manhattan. After further investigation, Le Bar also was posthumously diagnosed with smallpox.

It was settled: The city was facing the potential for an epidemic.

When the outbreak of smallpox was confirmed, Weinstein immediately notified the public and convened a meeting with Edward Bernecker, the commissioner of hospitals, to develop a response. The city’s mayor, William O’Dwyer, supported Weinstein’s decision to begin a mass vaccination campaign to stop the disease, and even publicly let Weinstein vaccinate him. The health department had a sterling reputation with the press and public and conducted an extensive education campaign. There were, as Weinstein put it: “…[H]eadlines in papers throughout the country, hourly bulletins on the radio, laboratories working on a 24-hour schedule to produce vaccine, and hundreds of thousands of people standing on line for hours in order to enter a health center, hospital clinic, or police precinct”—an enormous response.

Thousands volunteered to help. Rumors, gossip, and frightening stories in the press were kept to a minimum because reporters checked with the Health Department before publishing their articles. In less than a month, the city vaccinated more than 6 million people, according to Weinstein.

In less than a month, the city vaccinated more than 6 million people.

The effort wasn’t a complete success; 12 people came down with smallpox, and two died. And the smallpox vaccine wasn’t entirely safe. It had serious known side effects, including encephalitis. After the vaccination program started, 46 probable cases of encephalitis were reported. Of the eight encephalitis deaths, however, Weinstein said, autopsy results showed that the smallpox vaccination was not to blame. Three people also died from other complications related to the effort. “It must be borne in mind that had vaccination not been carried out on such a large scale, there very likely would have been thousands of cases and hundreds of deaths,” Weinstein wrote.

There are also, of course, cautionary tales in the history of local response to disease, instructions for how not to handle a potential epidemic. Contrast New York’s response to smallpox in 1947 to what Milwaukee did with an outbreak there in 1894. Health officials in Milwaukee took an aggressive approach to vaccination and isolation, targeting in particular immigrants on the south side of the city, according to University of Wisconsin medical historian Judith W. Leavitt.  In another account of the outbreak given on Marquette University’s website, Walter Kempster, the commissioner of health, gave false reassurances to the public that there was no cause for alarm, saying in June 1894 that there were only 18 cases and two deaths.

In reality, health officials suspected that not all of the Milwaukee cases were being reported.

Many of the smallpox cases in Milwaukee were reported on the south side of town near the city’s Isolation Hospital. Officials forced immigrants into hospitals while native-born, middle class residents were allowed to stay home, Leavitt told a National Academies workshop. Rumors spread of brutality in the Isolation Hospital, and an ex-patient reported abysmal conditions inside. Residents living near the hospital even mobilized to get the city to move the facility somewhere else; they feared that living close to it increased their risks of catching the disease. Health and city officials opposed them.

The poor relationship between the city government and the community came to a head when health officials tried to transport a sick child to the hospital in early August and were met by an armed and angry mob of 3,000 south-siders, according to the Marquette University account. During the entire month of August, riots broke out protesting the Health Department’s policies. Police officers were hurt. When the epidemic finally ended a year after it had started, almost 900 people had developed smallpox, and 244 died.

There is no vaccine against COVID-19, which appears to be highly contagious. (According to an editorial in the New England Journal of Medicine, one sick person will infect, on average, approximately 2.2 other people.) Some infected people can potentially spread the disease without themselves showing any signs or symptoms of illness. US officials say that a vaccine is at least a year away at the earliest.

Instead, the playbook for the coronavirus consists of other standard public health measures—quarantine the healthy to break the chain of transmission and isolate the sick to keep them from infecting others.

Cities, businesses, and schools should prepare for a time when a significant fraction of the population might have to shelter-in-place in their homes. Stockpiling food, water, and medical supplies, enabling remote work and education, and encouraging basic hygiene are important steps, as is getting vaccinated against the flu and pneumonia. All of these measures could help reduce the risk of severe disease complications from the coronavirus—as would a health department that engages in honest communication, conducts educational campaigns and outreach, and has a sterling reputation for truth-telling with the press and public.

We can’t wait for Mike Pence. Now is the time for local leadership.