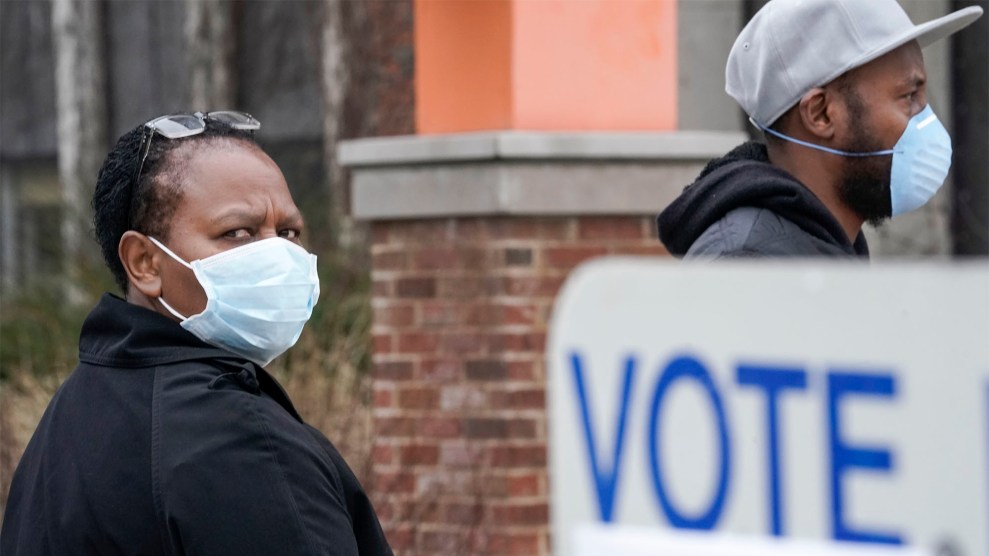 To understand how Wisconsin found itself in the insane position of holding critical elections in the middle of a deadly pandemic, you have to go back almost a decade to 2011, when Republicans took over state government for the first time in sixty years. They quickly took two steps that solidified their grip on power, moved the state toward one-party rule, and cemented a judicial-feedback loop that has further entrenched Republican dominance in spite of the views of the majority of the state’s citizens.

In May 2011, in their first session in charge, Republicans passed a voter ID law, admitting it was designed to suppress the votes of college students and black residents in Milwaukee, two core Democratic constituencies. Just a few months later, they passed one of the country’s most ruthlessly gerrymandered legislative maps, dividing the state’s voters between districts in a way that made it virtually impossible for Republicans to lose power.

What happened next shows how these steps eroded democratic accountability, allowing Republican leaders a free hand and leaving the state’s voters with little recourse. The voter ID law went into effect in 2016, when Glenn Grothman, then a Republican state senator, predicted it would help his party’s presidential candidate carry the state. That’s exactly what happened. According to a University of Wisconsin study, the law prevented up to 23,000 people from voting in Milwaukee County and Madison’s Dane County—a margin larger than Trump’s 22,000 vote victory in the state—with black voters three times as likely as whites to say they were deterred from voting. And thanks to the districts they shaped, the GOP has held a lock on the legislature, as starkly illustrated by the outcome during 2018’s blue wave elections: As Democrats swept all statewide contests, Republican candidates retained 64 percent of seats in the state assembly, even though they earned just 46 percent of the votes. Before the state’s newly chosen Democratic governor, Tony Evers, could take office, Republicans held a lame-duck legislative session to strip him of power and limit access to early voting, which is popular in Milwaukee.

Last week, when Evers called on the legislature to postpone Tuesday’s elections amid a rising outbreak of the coronavirus or to mail a ballot to every registered voter, Republican leaders immediately refused. Their intransigence seemed likely to ensure that a conservative justice on the state Supreme Court would be re-elected in a contest with lower Democratic turnout, as dense cities like Milwaukee are hit hardest by the crisis and have seen the most polling places shuttered.

That would only accelerate an existing trend, allowing the state Supreme Court to continue to play a key role in consolidating conservative power. Over the past decade, right-wing groups, working with GOP officials, have funneled millions in dark money to back candidates for the court, helping achieve a majority that has consistently upheld Republican efforts to stifle democracy in the state. That investment paid off handsomely on Monday, when four conservative justices on the bench blocked a last-minute executive order by Evers to postpone in-person voting until June. Their colleague Daniel Kelly, the conservative justice up for re-election on Tuesday, had tweeted that the election should not be delayed.

Wisconsin has helped make a similar dynamic play out at the national level. After Trump narrowly secured the White House in 2016 with the help of the state’s electoral college votes, he made two appointments to the US Supreme Court which maintained its conservative tilt. Under Trump, the high court has regularly permitted GOP efforts to make it harder to vote, both in Wisconsin and nationally, by upholding voter ID laws, gutting the Voting Rights Act, allowing voter purging, and refusing to ban extreme partisan gerrymandering. On Monday, the justices further aided Wisconsin Republicans by overruling a lower federal court’s ruling that would have extended the state’s window for returning absentee ballots amid the pandemic. As Justice Ruth Bader Ginsburg wrote in her dissent, the move would lead to the “massive disenfranchisement” of “tens of thousands of voters.”

Tuesday’s outcome seems likely to set the stage for yet another ruling by the Wisconsin Supreme Court that will advantage Republicans. If Kelly holds his seat and conservatives retain a 5-2 majority, they are poised to issue a ruling in the coming months allowing the state to purge 232,000 voters, disproportionately from Democratic areas like Madison and Milwaukee, from the voter rolls before the 2020 general election.

It’s a vicious cycle: GOP efforts to undermine the democratic process helped lead to the election of conservative judges in Wisconsin and the appointment of conservative justices on the federal level, who then issue rulings upholding Republican efforts to further suppress Democratic participation. What’s happening in Wisconsin is a preview of the strategy Republicans will likely adopt nationwide in November—oppose making it easier to vote, even in the midst of a pandemic, and hope that the courts will give you the green light.