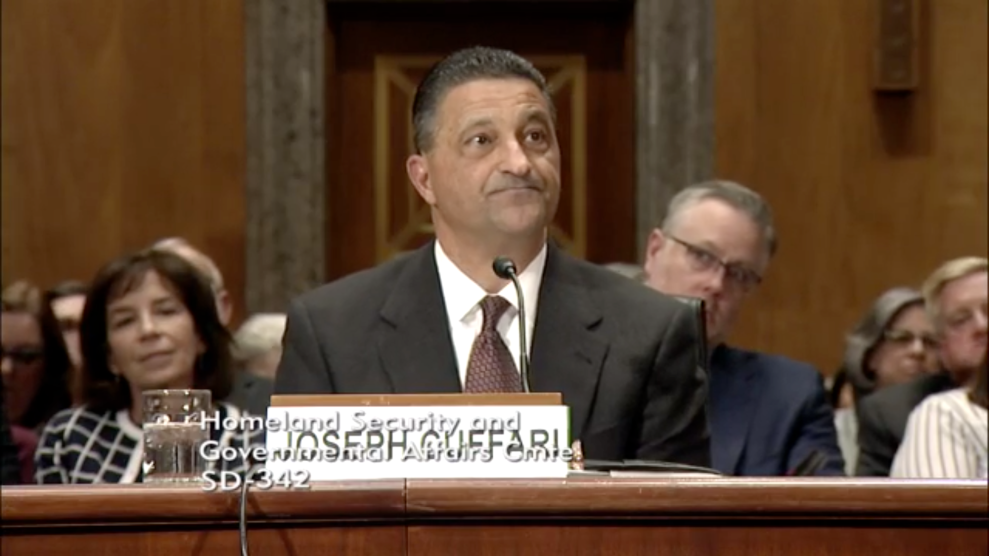 The Department of Homeland Security’s inspector general wants you to know he has the credentials to hold accountable a 240,000-person department responsible for keeping the country safe. Until Thursday, Joseph Cuffari’s official government bio stated, “Dr. Cuffari earned a Ph.D. in philosophy.”

Cuffari’s PhD from California Coast University is in management, and it was conferred by a school that was unaccredited at the time. In 2004, two years after Cuffari received the degree, the Government Accountability Office prominently featured California Coast University in a report on unaccredited “diploma mills” that required no classroom instruction and issued degrees for low flat fees.

Despite all this, Cuffari has regularly signed letters to Congress and the head of DHS as “Joseph V. Cuffari, Ph.D.”

In recent weeks, President Donald Trump has fired independent inspectors general investigating wrongdoing by his administration and replaced them with political appointees beholden to him. In the past two months, Trump has gotten rid of or pushed aside five inspectors general, complaining that they were treating him “very unfairly.”

Cuffari, whom Trump nominated in November 2018, is the kind of laissez-faire watchdog Trump is looking for. A senior staffer in Cuffari’s office told the Washington Post in March that the office was often empty, well before the pandemic hit. House Oversight Committee Chair Carolyn Maloney (D-N.Y.) noted in a March letter to Cuffari that his office had completed only 20 reports this fiscal year, compared to 58 during the same period in 2018, before Cuffari’s tenure.“You have released reports at a slower pace than your predecessors for every year since 2003—the first year your office began issuing reports,” Maloney wrote.

DHS, which Cuffari is supposed to be holding accountable, has a nearly $70 billion budget. It includes the Secret Service, the Transportation Security Administration, and the Federal Emergency Management Agency, as well as the three immigration agencies at the center of Trump’s most controversial policy moves. Since the Senate confirmed Cuffari in July, his office has published only one critical report on the president’s anti-immigrant agenda, documenting DHS’s disastrous implementation of Trump’s family separation policy. Cuffari reportedly tried to suppress it. When it did come out, he distanced himself from the findings by stating that he hadn’t participated in the investigation. (Last week, “Joseph V. Cuffari, Ph.D.” informed Congress in a letter that he will be investigating ICE’s reckless response to COVID-19 at its detention centers.)

House Homeland Security Committee Chair Bennie Thompson (D-Miss.) sent a letter to Cuffari in March to express his “deep concerns” about the quality of reports from Cuffari’s office on the deaths of two children in Customs and Border Protection custody. The reports were so flawed, Thompson said, that he was worried about Cuffari’s ability to investigate DHS’s response to COVID-19. In December, the top Republicans and Democrats on the House and Senate homeland security committees stated in a letter that “bureaucratic infighting and competing allegations of misconduct” plagued the inspector general’s office under Cuffari.

Prior to becoming DHS inspector general, Cuffari worked as a policy adviser to Arizona’s Republican governor. Earlier, he spent more than two decades working in the Justice Department. His official bio mentions that he attended the University of Arizona as an undergrad but does not say where he got his PhD.

When I asked the inspector general’s press office to comment on Cuffari’s degree from an unaccredited school, a spokesperson replied that CCU was “accredited during his matriculation” from 1998 to 2002. But the school’s registrar told me that CCU gained accreditation for the first time in its history in 2005, and as a condition for becoming accredited, the Distance Education Accrediting Commission required it to stop offering doctoral programs.

After I mentioned those details to Cuffari’s spokesperson, the inspector general’s office contacted California Coast University and then clarified that the school was “approved by the State of California to award degrees of higher education, including doctoral degrees” when Cuffari was enrolled. But that approval came from the now-defunct California Bureau for Private Postsecondary and Vocational Education, which okayed everything from barbering and bartending schools to a course in “Sexological Bodywork.” Officials at the bureau readily acknowledged to reporters in 2005 that they applied minimal standards, far less rigorous than accreditation. When Cuffari graduated, CCU’s degrees could not be legally used in neighboring Oregon, which was known for closely monitoring the quality of unaccredited schools.

California Coast University was founded by Thomas Neal in 1973 as California Western University, trading off the reputation of a school that had that same name until 1968. Neal said in 1990 that students could get his PhDs in less than a year. A few years before Cuffari enrolled, a regional accreditation official said about the degrees there, “Anybody can go out and buy anything they want to…Don’t represent it to the public.”

When Cuffari attended CCU, it was based out of a small office building in Orange County that’s currently home to a 7-Eleven and a Subway. But like all students there, he took his classes remotely. Doctoral students were required to show up on campus just once, to defend their dissertations, in a process the school’s catalogue called “a time for exchanging ideas and concepts whereby both the candidate and faculty share a beneficial growth experience.”

Unlike full-on diploma mills, CCU appeared to require some coursework, and doctoral students had to write a dissertation. Alumni have defended the school to say that they valued the education they received. But it was still far from a traditional institution. Its website at the time of Cuffari’s matriculation contained no information on the professors or the courses offered. A form for requesting additional information asked potential applicants how they’d heard about CCU. There were two options: a drop-down menu titled “Airline Magazine” that allowed people to select the airline where they had encountered the school and an open-ended field for any other source.

A 24-page catalogue for the 2002-2003 academic year listed the price of the management PhD at $4,575, a flat fee for up to five years of enrollment, rather than the per-semester tuition at most schools. The catalogue lists three deans, one of whom got her doctorate from CCU. Coursework requirements could be satisfied through previous graduate credits, by reading “Study Guides” and taking final exams on them, and by completing vaguely defined “Accelerated Learning Guides” that factored in “independent reading experience.”

In 2004, the GAO came out with its “diploma mills” investigation. The agency, which helps Congress conduct oversight of the executive branch, also submitted testimony to Congress bearing the subheading “Diploma Mills Are Easily Created and Some Have Issued Bogus Degrees to Federal Employees at Government Expense.” The GAO defined diploma mills as “nontraditional, unaccredited, postsecondary schools that offer degrees for a relatively low flat fee, promote the award of academic credits based on life experience, and do not require any classroom instruction.” CCU met those criteria.

Susan Collins, the Republican senator from Maine, had requested the GAO report, and after it came out, she expressed “great concern that federal officials who hold high-ranking positions, and security clearances in some instances, have degrees from diploma mills.” She added, “It calls into question their qualifications and abilities to do their jobs.”

At Cuffari’s confirmation hearing, senators addressed him as “Dr. Cuffari.” After being confirmed unanimously in July, he avoided testifying before Congress about the deaths of children in Customs and Border Protection custody. “Instead, you intend the OIG to be represented by a subordinate,” Thompson wrote in his March letter. “This is unacceptable.” Last month, Cuffari finally agreed to testify on a date to be determined.

On Thursday, following questions about the philosophy degree, Cuffari’s office changed his bio to say his PhD was in management. The name of the school that “Dr. Cuffari” attended is still absent.