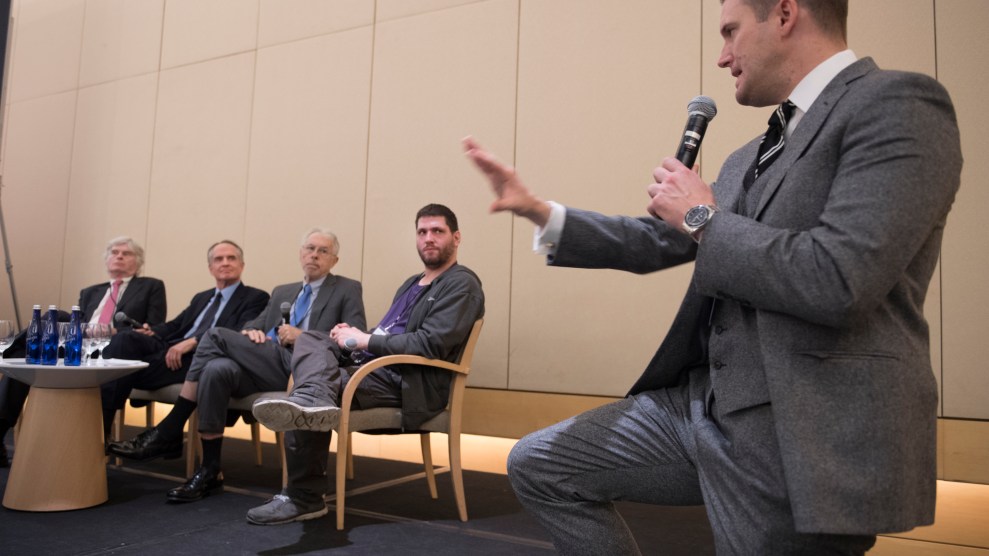 Jared Taylor, second from left, appears alongside Richard Spencer and other white nationalists during a panel in 2016. Taylor was represented in court by attorney Adam Candeub, a new hire in the Commerce Department.Linda Davidson/The Washington Post via Getty Images

The Trump administration has just added a lawyer to its staff who has no problem maintaining close ties with racist, far-right extremists.

Within the past week, the Department of Commerce tapped Adam Candeub for an influential role in the National Telecommunications and Information Administration subagency as its deputy assistant secretary, according to an internal email obtained by Mother Jones. The full email is at the bottom of the page.

While the email touts Candeub’s credentials as a Michigan State University law professor and his work in the Federal Communications Commission, it leaves off his legal work representing white nationalist Jared Taylor, who founded the New Century Foundation. The organization “purports to show the inferiority of blacks to whites,” according to the Southern Poverty Law Center.

Candeub represented Taylor in his lawsuit against Twitter, which banned him from the site in its 2017 crackdown on white nationalists and hate groups. A California state appeals ruled in favor of Twitter in August 2018.

Candeub’s work for Taylor isn’t the only time he’s linked up with white nationalists. The lawyer has published at least four op-eds—in the Wall Street Journal, Forbes, and US News and World Report—with Marcus Epstein, an antitrust lawyer with a history of working for white nationalists and publishing racist stories on the white nationalist site VDare. BuzzFeed reporters Ryan Mac and Joe Bernstein found that Epstein’s work for VDare includes a story about some comments by Howard Dean entitled “Dean Is Right – GOP Is ‘The White Party.’ So?” and a short little racist riff called “White Refugees And Culture.” The op-eds co-written by Candeub and Epstein weren’t anywhere near as juicy—they were about telecom policy and Twitter’s content moderation practices.

Here are some other Epstein white nationalist highlights from the BuzzFeed piece:

Epstein, who worked for the conservative commentator Pat Buchanan, was a key figure in nativist and white nationalist political circles from the mid-2000s to the early 2010s. In 2006, he founded the now-defunct Robert A. Taft Club alongside [Richard] Spencer and Kevin DeAnna, another leading white nationalist. Invited speakers to that club included influential white supremacist Jared Taylor and the journalist John Derbyshire, who would eventually be fired from the National Review in 2012 for a racist column.

Candeub declined to tell BuzzFeed if he was aware of Epstein’s racist past.

Mother Jones reached out to the Department of Commerce and the NTIA for comment but has not yet heard back from either.

Please join me in welcoming two new members of our front office leadership team. Adam Candeub is taking the post of Deputy Assistant Secretary, and Jim Medica will serve as a Senior Advisor. Adam comes to NTIA with a strong background in communications law. Most recently, he’s served as a professor of law at Michigan State University College of Law and director of the Intellectual Property, Information, and Communications Law Program. Previously he worked in the FCC’s Media and Wireline Competition Bureaus, and was an associate at Jones, Day Reavis and Pogue. See his bio on the NTIA website.

Jim is a globally recognized engineering service provider executive, most recently serving on the Board of Advisors at Sercomm Corporation. He is the former Group Vice President, Advanced Engineering at Charter Communications (Spectrum) and Time Warner. In addition, Jim has served on advisory boards with Nokia and Cisco Systems and on the board of ATIS (Alliance for Telecommunications Industry Solutions). We’ll be adding Jim’s full bio to the website later today.

While we can’t extend in-person handshakes at this time, we are thrilled to welcome these highly qualified professionals to our NTIA team. Please be sure to include Adam and Jim in your policy updates, conference calls and other relevant work so we can fully integrate them into our policy work.