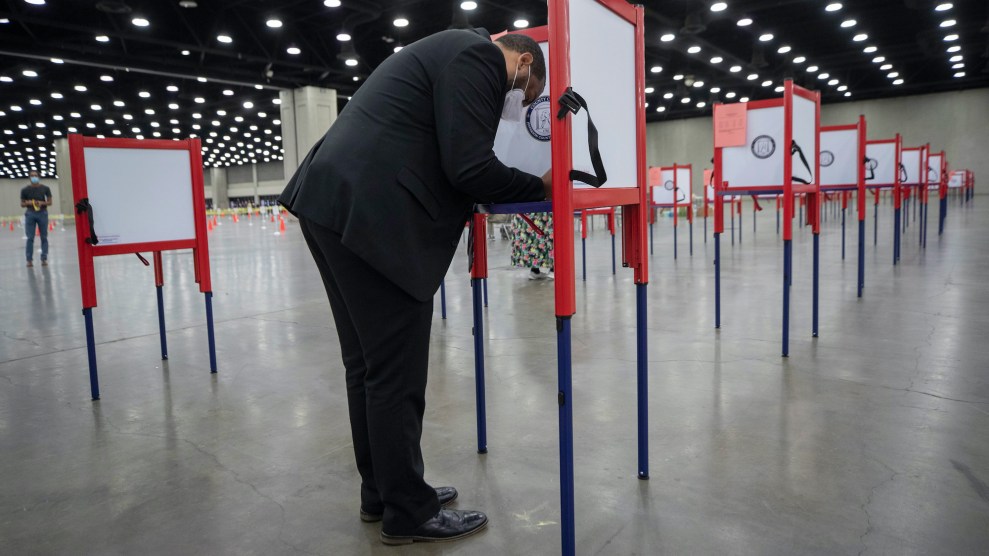 On Tuesday, Kentucky voters will determine which Democrat will challenge Senate Majority Leader Mitch McConnell in November. Recent events have tightened the primary into a competitive race: In March, eight police officers barged into Breonna Taylor’s apartment in Louisville with a battering ram and fatally shot her. According to polling, voters outraged over Taylor’s killing and propelled by the national uprising against systemic racism have narrowed the gap between progressive Charles Booker, a Black state representative with a message about racial justice, and former Marine Amy McGrath, a moderate Democrat.

But the threat of the coronavirus pandemic, coupled with decisions by election officials to close thousands of polling places across Kentucky, leaves many of those newly energized voters in a bind.

Thousands of voters have requested mail-in ballots, but some have yet to receive them just days before the election.

After Kentucky Gov. Andy Beshear delayed the primary from mid-May to June 23 in response to the coronavirus pandemic, he issued an executive order requiring the Board of Elections to expand voting by mail, permit early voting, and limit contact among voters and poll workers during in-person voting. About a week later, the Board of Elections directed county clerks across the state to submit plans that included cuts to the number of polling locations in each county. Counties across the state complied; Louisville’s Jefferson County (pop. 767,000) chose a single polling place, a convention and expo hall with spaced-out voting booths, while Fayette County (pop. 319,000) selected the University of Kentucky’s football stadium.

All in all, according to the Washington Post, Kentucky officials have reduced the number of polling places in the state from 3,700 in a typical election year to fewer than 200 this month. Meanwhile, though thousands of voters have requested mail-in ballots in an attempt to avoid in-person voting, some have yet to receive them just days before the election date of June 23, when they must be postmarked.

The decision to cut polling places has drawn concern about the potential for voter suppression, particularly of Black voters, many of whom live in the counties where there will be a single voting location. About 20 percent of residents in Jefferson County are African American, making the county the center of the state’s Black population. In a tweet, LeBron James called out the reduction of Louisville polling sites as an example of systemic racism and oppression.

Said it last week about GA. This is SYSTEMIC RACISM and OPPRESSION. So angry man. 😤😤😤 #BlackLivesMatter ✊🏾 #MoreThanaVote 🖐🏾 https://t.co/o9440Ugyzv

But on Thursday night, a federal judge denied a motion in a class-action lawsuit filed by Republican state Rep. Jason Nemes and voters from Kentucky’s Jefferson, Fayette, and Kenton counties. The lawsuit sought a court order to add more polling places to the counties, the three most populous in the state. “The issue before this Court is not whether a hypothetical voter in Kentucky’s upcoming primary election would benefit from additional polling locations,” wrote Judge Charles Simpson III, denying the motion. “Rather, the issue is whether the challenged election procedures result in a cognizable infringement under the Constitution or an injury under the Voting Rights Act. We conclude that it does not.”

“It’s outrageous that officials are seeking to hold in-person elections in a single location.”

James’ tweet also referenced the disastrous primary election in Georgia on June 9, where long waits and issues with voting machines appeared to have primarily affected voters in Black neighborhoods. As my colleague Noah Lanard reported:

Voters in and around Atlanta reported standing in line for hours as machines malfunctioned and precincts ran out of backup ballots during Tuesday’s primary. Clarke said many people were forced to go to the polls because they had not received the absentee ballots they requested.

“Everything that could happen or go wrong has gone wrong so far,” Robb Pitts, the chair of the board of commissioners in Atlanta’s Fulton County, told the Atlanta Journal-Constitution. The problems, Pitts said, stemmed from a perfect storm surrounding the elections: the pandemic, nationwide protests against police brutality, fewer precincts being open, and problems with absentee ballots.

Voting and civil rights experts are watching to see if Kentucky will show the same dysfunction on Tuesday. “It’s outrageous that officials are seeking to hold in-person elections in a single location,” Kristen Clarke, president and executive director of the Lawyers’ Committee for Civil Rights Under Law, told the Washington Post. “It’s as if Kentucky failed to follow the crisis that unfolded in Wisconsin and Georgia, where officials were woefully unprepared for the turnout on Election Day.”