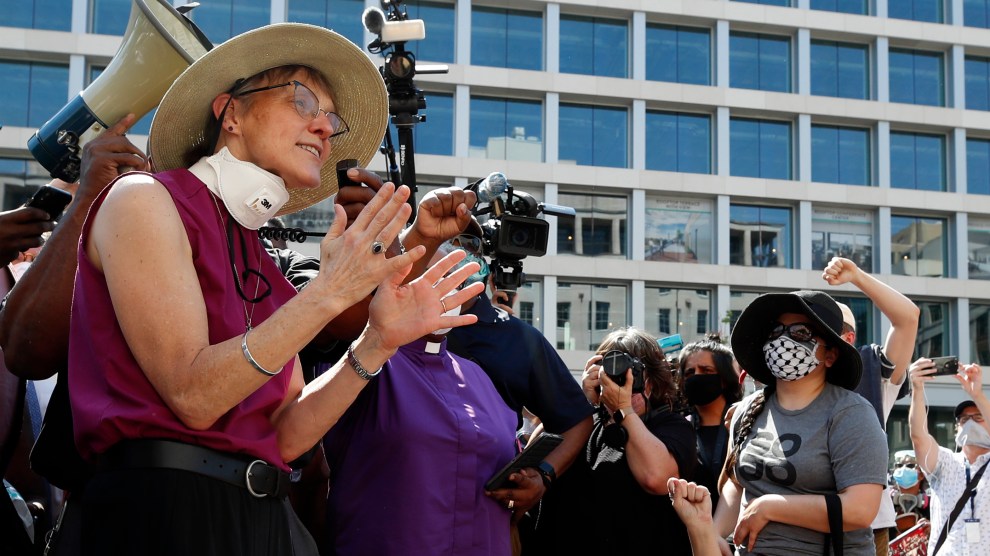 The Rev. Mariann Budde speaks down the block from St. John's Church.Alex Brandon/AP

On Monday, President Donald Trump tear-gassed an assembly of peaceful demonstrators just outside the White House so he could awkwardly struggle to hold a bible during a photo op in front of St. John’s Episcopal Church.

On Wednesday, Trump-authorized federal police closed off a portion of 16th Street just north of the church, about a block from the White House, which kept clergy from being able to use their house of worship.

Bishop Mariann Budde, who had assailed Trump’s Monday visit as a “symbolic misuse of the most sacred texts of our tradition,” planned to hold a vigil in front of the church to show solidarity with protesters. But a new security perimeter, extending almost a quarter of a mile out from the front of the White House, blocked her access and forced her into the street. A crowd still gathered, but away from its envisioned location and with it being difficult for most of the crowd to see or hear, the event lost momentum.

Protesters on the scene voiced frustrations with how they believed Budde and her church have overshadowed their demonstration, saying she and the Episcopalians did not speak for them. Budde rejected this, to which they responded by asking “Then why are the cameras focused on you?”

“We as people of faith are here to stand with you and for you,” she said, before taking a seat on the street pavement and beginning a longer discussion.

just got down to downtown dc where a bishop was supposed to hold an event/vigil at st. john’s but police are blocking and forced it to away a block or so up away from the church pic.twitter.com/LpnpibSzL2

Protesters ask Bishop, “Then why are the cameras focused on you?” Bishop sits down on ground in response. pic.twitter.com/9Mmrg23Po0

The unanticipated conflict and conversation might not have happened had the perimeter still been configured to allow access to St. John’s.

“We felt the need to interact and talk with them,” Rev. Paula Clark, a senior official in the Washington diocese, told the Episcopal News Service, explaining why the sit down unfolded.

With the vigil abandoned, the discussion happened as a crowd built-up in front of the nearby Washington headquarters of the AFL-CIO. Protesters handed out water bottles and left snacks and other supplies for anyone to take freely as the temperature hit 90 degrees.

Other clergy members showed up in solidarity. One, Russ Whitfield, a pastor at Grace Mosaic D.C., led a satellite prayer for people unable to see and hear what was happening at the front of the crowd. “It’s a little frustrating,” Whitfield said of the vigil being pushed away from St. John’s. “But man, it’s a little chaotic right now. We’re just trying to be flexible.”