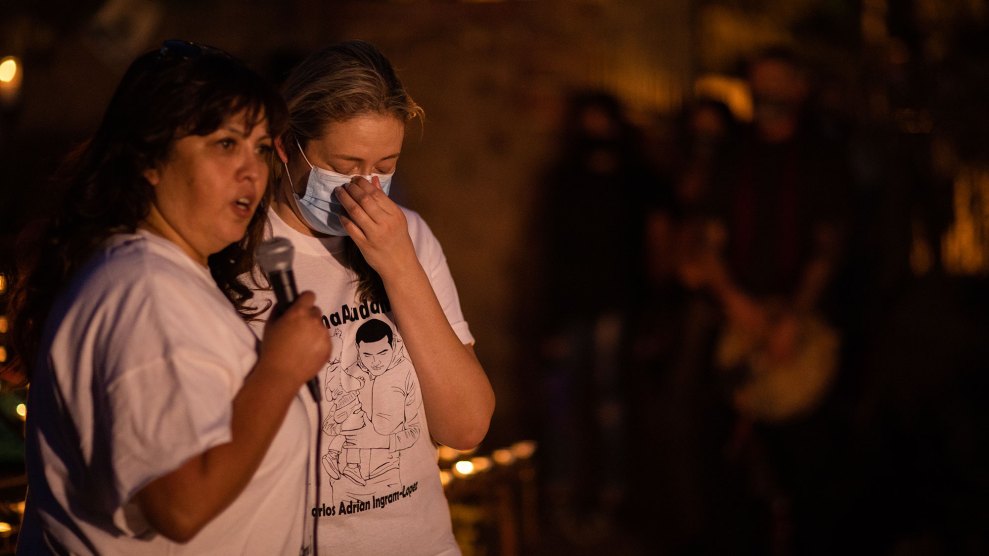 Hundreds of people stood in the summer heat of Tucson, Arizona, on Thursday, candles in hand. Fourteen times, they chanted the phrase “Nana, ayúdame”—Grandma, help me—the last words of a man named Carlos Adrian Ingram-Lopez, who in April died in police custody when officers responding to a domestic call handcuffed and pinned him face-down to the ground for 14 minutes, even as he told them he couldn’t breathe.

Ingram-Lopez died on April 21, but details weren’t made public until the Tucson Police Department held a press conference Wednesday. The secrecy surrounding his last living moments—even city officials didn’t know about Ingram-Lopez’s death until last week—has caused outrage in the southern Arizona city, whose progressive image, some residents believe, is at odds with the way police treat its largely Latinx population.

Shortly after 1 a.m. on April 21, Ingram-Lopez’s grandmother called 911, saying her grandson “was drunk, yelling, and running around the house naked.” At Wednesday’s press conference, Tucson police chief Chris Magnus showed video from an officer’s body camera, telling the crowd before he pressed play, “I will share with you that this is a very difficult video to watch, especially knowing that Mr. Ingram-Lopez dies at the end.”

The footage showed Ingram-Lopez running to the garage naked. “He was acting in a highly erratic manner but soon became more compliant,” Magnus said. He immediately followed an officer’s order to get on the ground and lay on his stomach. Officers quickly pinned him and handcuffed him with his arms behind his back.

While laying face-down on the ground, Ingram-Lopez said he couldn’t breathe and repeatedly pleaded for water in English and Spanish: “Nana, please, some water, I beg you.”

Minutes went by. Ingram-Lopez began to scream between gargling or choking noises, but officers continued to keep him pinned on the ground. “You’re gonna get shocked dude,” one officer said, as Ingram-Lopez continued crying out for help. “You’re gonna get zapped.” One of the officers kept his knee on Ingram-Lopez’s back. This continued for a few minutes until Ingram-Lopez seemed to calm down. After a few more minutes, police realized he wasn’t breathing and flipped him on his side. Paramedics would unsuccessfully perform CPR, and Ingram-Lopez died on the floor of his grandmother’s garage.

The medical examiner said that Ingram-Lopez had a preexisting heart condition and cocaine in his system but added that the cause of death was “undetermined,” Magnus said at the press conference.

The 27-year-old’s cries for his grandmother in the video quickly spread on social media under the hashtag #NanaAyudame. Some posted about the need for alternatives to police when family members are having a mental health crisis. Others tallied the number of times Ingram-Lopez cried for his grandmother and the times he said “I’m sorry” and “I need water” before his death.

His case is the latest instance of police killing a person of color in custody. The Tucson chapter of Black Lives Matter—which had helped organize some protests in the city following the death of George Floyd—said in a statement that it stood “in solidarity with the Latinx community that is mourning the murder of one of its own.”

Over the last few weeks, at least three Latinos have been killed by police in California alone: Andres Guardado, Erik Salgado, and Sean Monterrosa. The calls for reform and for defunding the police continue to grow, even if, nationwide, protests are shrinking in size. On Twitter, the Latinx organization UnidosUS said of Ingram-Lopez’s death, “This epidemic of racialized violence must stop, and it must stop now.”

At Wednesday’s press conference, Magnus added that an internal police investigation concluded that the three officers involved in Ingram-Lopez’s death—Samuel Routledge, Ryan Starbuck, and Jonathan Jackson—committed “multiple policy violations,” but that they did not use a chokehold or place their knees on Ingram-Lopez’s neck. Investigators determined that the officers at the scene “showed complete disregard for the training provided…but most importantly an apparent indifference or inability to recognize an individual in medical distress and take appropriate action to mitigate the distress.” On June 18, the three officers involved submitted their resignations, a day before the investigation concluded; Magnus said the department “would’ve terminated them” if they hadn’t resigned. (The Tucson Police Department did not put out a press release reporting the “in-custody death” on April 21.)

“It is simply not acceptable that mayor and council and the public were not notified of this event after the incident took place,” Tucson Mayor Regina Romero told reporters Wednesday.

Magnus offered his resignation after playing the video at the press conference Wednesday. But Tucson’s city manager, Michael Ortega, rejected his resignation on Thursday. According to the Arizona Daily Star, Ortega and Romero, the mayor, expressed support for Magnus, saying he has brought “forward-thinking” changes to the police department and is “exactly what we need in these difficult times.” Magnus took over as police chief in 2016 as the first openly gay man to lead the department.

Thursday’s vigil was held at El Tiradito, a centuries-old local shrine that has long served as a gathering place for Tucsonans to mourn and protest. People often leave notes with wishes and tuck them in the holes of El Tiradito’s adobe walls. That night, Ingram-Lopez’s family demanded that the police department be held accountable, and urged those at the ceremony to not “forget him and help us fight.”