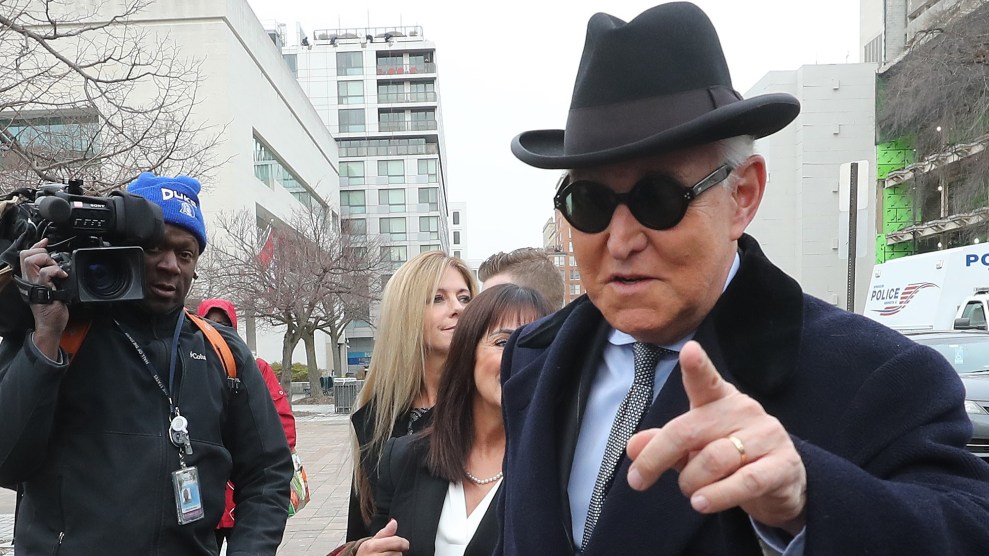 Roger Stone, arrives at court for sentencing on February 20, 2020 in Washington.Mark Wilson/Getty

A Justice Department lawyer who prosecuted Roger Stone is alleging that attorneys involved in the case were pressured by their superiors to “cut Stone a break” due to his relationship with the president.

Stone was convicted of five counts of making false statements—as well as obstruction of Congress and witness tampering—after lying to the House Intelligence Committee about his efforts in 2016 to contact WikiLeaks regarding Democratic emails hacked by Russia. Evidence compiled by special counsel Robert Mueller showed that Stone consulted personally with Donald Trump and senior Trump campaign officials about Stone’s efforts to glean information on WikiLeaks’ plans for disseminating the stolen emails.

“What I heard—repeatedly—was that Roger Stone was being treated differently from any other defendant because of his relationship to the President,” Aaron Zelinsky says in written testimony submitted to the House Judiciary Committee ahead of a hearing scheduled for Wednesday. “I was told that the Acting US Attorney for the District of Columbia, Timothy Shea, was receiving heavy pressure from the highest levels of the Department of Justice to cut Stone a break, and that the US Attorney’s sentencing instructions to us were based on political considerations. I was also told that the acting US Attorney was giving Stone such unprecedentedly favorable treatment because he was ‘afraid of the President.'”

Shea was installed as acting head of the DC federal prosecutors’ office by Attorney General William Barr after Barr removed former US Attorney Jessie Liu. Shea is now the acting head of the Drug Enforcement Administration. This alleged meddling in the Stone case appears to be part of a pattern. Barr later moved to drop a case against former Trump national security adviser Michael Flynn, who had already pleaded guilty to lying to federal investigators about his contacts with the Russian ambassador to the United States. And late last Friday, Barr ousted the US Attorney for the Southern District of New York, Geoffrey Berman, who was overseeing several cases related to Trump associates. Spokespeople for the DOJ, the DC US attorney’s office, and the DEA did not immediately respond to requests for comment on Zelinsky’s testimony.

Zelinsky describes how Shea and other Justice Department officials pressured the front-line prosecutors in the case to recommend a more lenient sentence for Stone than those prosecutors believed was fair. Zelinsky says their jobs were threatened. “We were told by a supervisor that the US Attorney had political reasons for his instructions, which our supervisor agreed was unethical and wrong,” he says. “However, we were instructed that we should go along with the US Attorney’s 10 instructions, because this case was ‘not the hill worth dying on‘ and that we could ‘lose our jobs’ if we did not toe the line.”

The prosecutors initially suggested that Stones should receive more than seven years in prison. But the day after a 1:48 am tweet in which Trump complained that the recommendation was “horrible and very unfair,” Zelinsky says he learned that the department would issue a new memo recommending a lighter sentence.

In failing to adhere to normal sentencing guidelines, the department “treated Roger Stone differently and more leniently in ways that are virtually, if not entirely, unprecedented,” Zelinsky says. He and other lawyers who prosecuted Stone withdrew from the case in protest of this political interference.

It’s not clear if the DOJ reversal actually affected Stone’s sentence. US District Court Judge Amy Berman Jackson ultimately sentenced Stone to 40 months in prison, citing “the egregious nature of Stone’s conduct.” Cleary referring to Trump, Jackson said it was important that the sentence not be influenced by anyone whose “political career was aided by the defendant. And surely not someone who has personal involvement in the events underlying the case.”