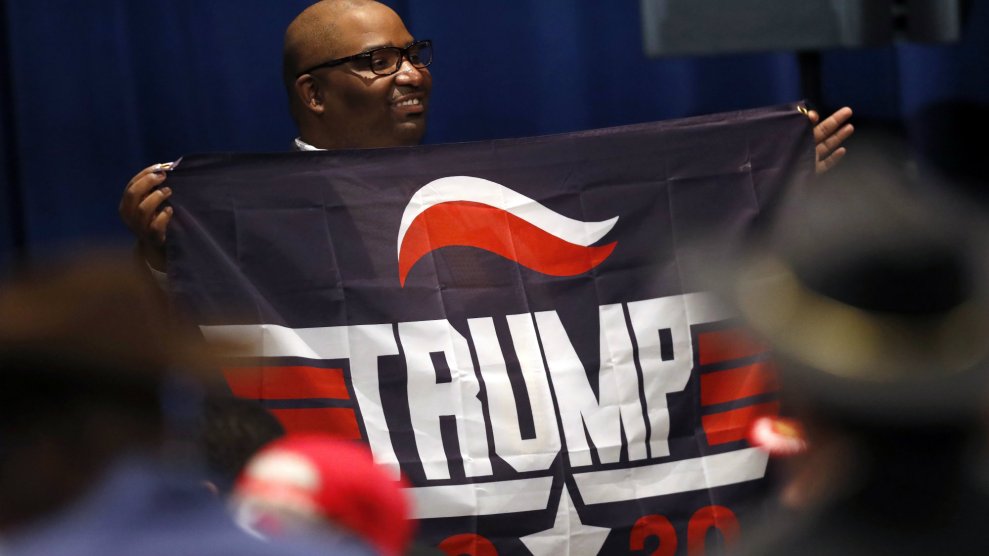 On May 22, presumptive Democratic presidential nominee and former Vice President Joe Biden appeared on The Breakfast Club, a syndicated radio show. During the interview, Charlamagne tha God, its Black host who has a knack for making Democratic politicians appear to be pandering, asked what Biden thought about Black voters who didn’t support him. Biden responded forcefully (and memorably), “If you have a problem figuring out whether you’re for me or Trump, then you ain’t Black.”

President Donald Trump needs every opportunity he can get to shore up Black votes. Last November, in the midst of the Trump-Ukraine scandal, the president’s reelection campaign launched Black Voices for Trump, a national coalition of prominent Black conservatives including Pierson, failed presidential candidate and former pizza mogul Herman Cain, controversial pastor Darrell Scott, and Paris Dennard, the senior communications adviser for Black media affairs at the Republican National Committee. As I reported last year, the announcement of the campaign’s Black vote effort sounded more like a typical Trump rally than a new initiative—the crowd broke out into chants of “Blacks for Trump! Blacks for Trump!” Meanwhile the president outlined his usual talking points of complaining about the media and the investigation into his dealings with the Russian government.

But several months, one pandemic, and countless incidents of shocking police brutality later (accompanied by countless incidents of presidential insensitivity), the RNC and likely the Trump 2020 campaign, still seems to be operating under the illusion that it has a coherent message that will persuade Black voters to support him.

“From day one of the campaign, President Trump has been committed to earning the vote of Black Americans.”

“From day one of the campaign President Trump has been committed to earning the vote of Black Americans,” the RNC’s Dennard told me in an email. But as crises that have a disproportionate impact on Black people roil the nation, the president has offered more of the same incompetence and dog-whistling. When I asked how recent events will square with their effort to reach out to Black voters, Dennard simply recycled old talking points—the once low unemployment numbers, for instance, and criminal justice reform—and asserted that the effort to reach Black voters is going well.

Black support for Trump was low before he even became president. Ben Carson was just another failed presidential candidate in 2016 when he tepidly endorsed Trump. “Even if Donald Trump turns out not to be such a great president, which I don’t think is the case, I think he’s going to surround himself with really good people,” he said. “But even if he didn’t, we’re only looking at four years as opposed to multiple generations, and perhaps the loss of the American dream forever.” (The retired neurosurgeon became Trump’s only Black cabinet member as head of the Department of Housing and Urban Development.) According to exit polls, Trump won 8 percent of Black votes in 2016 and hasn’t gotten much more Black support over the last three years. As I wrote when Blacks Voices for Trump was inaugurated last year:

If you’ve been paying even a modicum of attention since Trump first walked onto the political stage, those low numbers aren’t surprising. Trump launched his political career by propagating the lie that Barack Obama was a secret Muslim born in Kenya. He became one of the loudest birthers demanding that Obama provide his birth certificate and school records. In 2017, after white nationalists descended on Charlottesville, Virginia, and one killed Heather Heyer after plowing his car into a crowd of protesters, Trump said that there were “very fine people” on both sides. He also reportedly referred to Haiti and African countries as “shithole countries.” In 2019 alone, Trump suggested four brown and black congresswoman “go back” to their countries, despite the fact that three of the four were born in the United States; called Baltimore, which is part of the late Elijah Cummings’ congressional district, “rat infested” after Cummings criticized the Department of Homeland Security for poor conditions in immigrant detention centers; and compared the impeachment inquiry process to lynching.

All of those racist remarks obviously occurred when unemployment was low, a pandemic had not yet disrupted lives and the economy, and brutal police killings did not spark a national cry for justice. In January, the novel coronavirus appeared in the United States and began spreading widely, killing more than 110,000 and infecting close to 2 million people by June. While the Trump administration downplayed the threat and offered no systematic plan for testing or treatment or containing the spread, Black and Brown people disproportionately suffered. Meanwhile, the economy collapsed as a result of the shutdown from the virus, and workers filed more than 40 million unemployment claims. Then last month, widespread unrest swept the nation after white police officer Derek Chauvin killed George Floyd, a Black man in Minneapolis, by kneeling on his neck for nearly nine minutes. The video of the killing started an uprising and a protest movement against systemic racism not seen in generations.

In response, there have been no reassuring presidential messages of unity or comfort to Black Americans. Instead, there have been tweets. In the last few weeks alone, Trump has tweeted “when the looting starts, the shooting starts,” a reference to a racist police chief from the 1960s. He also retweeted an account smearing Floyd and supported a fake conspiracy theory that the 75-year-old man in Bufffalo who was pushed by police officers and left bleeding on the sidewalk was staged. He also urged governors to crack down harder on anti-racism protesters, saying they will look like jerks if they don’t “dominate.” He referred to those who demonstrated as “THUGS.” After pausing his rallies for three months because of the pandemic, Trump announced that the first one would be held on June 19, also known as Juneteenth, a holiday that celebrates the end of slavery in the United States in Tulsa, Oklahoma, the site of a 1921 massive racist massacre.

A Trump rally with rebel flags (a symbol of slavery and racism) in Tulsa, OK (the place of #TulsaMassacre) on Juneteenth (a day of emancipation recognition) is more than a slap in the face to African Americans; it is overt racism from the highest office in the land. #RejectRacism

On Friday morning, Trump’s 2020 campaign manager tweeted that the date was no problem, because Abraham Lincoln, who signed the Emancipation Proclamation which freed the slaves, was a Republican.

As the Party of Lincoln, Republicans are proud of what Juneteenth represents and the Emancipation Proclamation.@realDonaldTrump has a solid record of success for Black Americans.

It’s @JoeBiden who has the horrible record of racial division and condescension.

“Through the direct engagement on the ground, via social media, and with Black media outlets of the RNC and Black Voices for Trump we are already seeing tremendous gains,” Dennard said. “This is a national strategic effort with real people from the community, real dollars behind it and seeing real results already, and it is just June.”

“We look forward to contrasting the 3.5-year record of achievement for the Black Community of President Donald Trump to that of the 44 year record of inaction of Joe Biden.”

Dennard disagrees. “We look forward to contrasting the 3.5-year record of achievement for the Black Community of President Donald Trump to that of the 44 year record of inaction of Joe Biden,” he noted. “President Trump worked to right the wrongs of the 1994 Crime Bill written by Joe Biden.” Despite his overwhelming support among Black voters, the former VP is still dogged by his work in the Senate as one of the main architects of the sweeping legislation, which critics say helped increased the prison population and enabled a policing system that harms communities of color.

Dennard provides a unique spin on Trump’s law and order policies: “When the President talks about restoring law and order he is talking about protecting those Black-owned businesses literally on fire, being looted and destroyed.” Trump also had an opportunity to protect Black-owned businesses in the wake of the COVID-19 closures. The Paycheck Protection Program created by the Small Business Administration was supposed to help business owners weather the economic storm. The federal government has released scant data on who is receiving the loans but according to a survey of 500 Black and Latino business owners by racial equality groups Color of Change and UnidosUS, only 12 percent received help.

Despite the dramatically changed political and social landscape in 2020, Republicans are relying on the same talking points they’ve had for years. The campaign would like to focus on the 2018 First Step Act, a law that allows early release for certain incarcerated individuals, and opportunity zones, a program for low-income communities in which rich developers will get a tax break for “investing” in those neighborhoods.

Not that these two accomplishments have come without criticism. The Department of Justice is actually trying to return some of the people released by the First Step Act to prison. “[Trump’s] Justice Department is actively pushing to send some of these same people back behind bars, and to prevent others from reducing their sentences,” my colleague Samantha Michaels reported in February, “which greatly limits who can benefit from the law that Trump has touted as one of his signature achievements.” And many critics are calling foul on opportunity zones, saying they’re actually a new scheme to line the pockets of the wealthy.

While Trump struggles to lead a nation through two calamities, videos of police officers violently attacking protesters has caused big shifts in how white Americans view racism and criminal justice. A Washington Post poll found that 69 percent of Americans believe the recent killings of Black people by police represent a broader national problem, a 26 point increase since 2014. Broken down along party lines, 86 percent of Democrats and 47 percent of Republicans agree. The country appears to be on the cusp of a real reckoning of how policing perpetuates systemic racism and harms Black communities.

“What the hell do you have to lose?” Trump asked a crowd of supporters at an Ohio rally in 2016. He was referring to decades of systemic inequality that had left Black people with higher rates of poverty. The Trump campaign is still using that line to garner Black support. Except this time around, the answer has never been clearer.