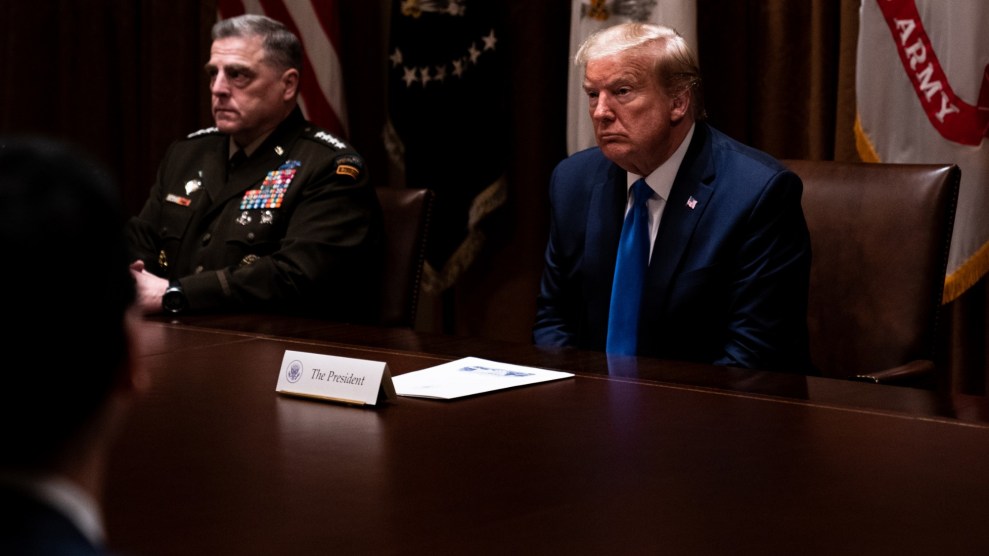 General Mark Milley, the chairman of the Joint Chiefs of Staff, faced heavy criticism after being photographed in his military uniform during President Donald Trump’s needless photo op last night—an event that involved protesters being tear-gassed to clear the path for Trump’s entourage. Now the Pentagon is defending Milley’s actions, claiming he was unaware of the plan to drive out protesters.

.@realDonaldTrump walks from the White House to the Historic St. John’s Church that was damaged during a night of unrest. pic.twitter.com/TWUckesbnE

The stunt, which culminated in Trump holding a Bible in front of St. John’s Episcopal Church in Lafayette Square, was widely derided by Trump critics, some Republicans, and even the bishop who oversees the church. Michael Hayden, a retired Air Force general who led the CIA and NSA under three presidents, tweeted that he was “appalled” to see Milley in “battle dress” and retweeted several posts criticizing Milley, including one that called for him to resign or be removed.

After Trump’s speech, Milley was spotted walking around DC after curfew to observe National Guard personnel. Asked what his message was for Guard units when dealing with protesters, Milley said, “Allow freedom to assemble, freedom of speech. That’s perfectly fine.”

Rep. Adam Smith (D-Wash.), who chairs the House Armed Services Committee, told reporters during a conference call on Tuesday that Milley “may have misread slightly” the situation. The two spoke briefly on Monday night, and Smith said that he trusts Milley’s word that the Joint Chiefs chairman was only with Trump to ensure National Guard members stationed in Lafayette Park “acted appropriately.”

An unnamed Pentagon official similarly told reporters that Milley and Defense Secretary Mark Esper had not planned to participate in Trump’s photo op. “They were not aware that the Park Police and law enforcement had made a decision to clear the square,” the official said. “And once they had begun to walk off the White House grounds with the president, they continued with him.”

A spokesperson for the Joint Chiefs did not respond to a request for comment.

Smith said he plans to formally invite Milley and Esper to address committee members at a public hearing next week on the military’s role in the response to the protests. “I’m concerned about what I’ve seen,” he said. Other members of Congress indicated that they too plan to turn up the pressure on Milley. Rep. Ruben Gallego (D-Ariz.), a Marine Corps veteran who serves on the Armed Services Committee, tweeted that he wants to know whether Milley will “obey illegal orders from the President.”

Trump has repeatedly suggested that active-duty members of the military could be more involved in cracking down on protesters. Normally, US troops are barred from performing a law enforcement function domestically, but before heading to the church, Trump threatened to invoke an 1807 law that would allow him to deploy soldiers “in cases of insurrections.” These troops would supplement more than 17,000 members of the National Guard who have already been deployed across 23 states and Washington, DC.