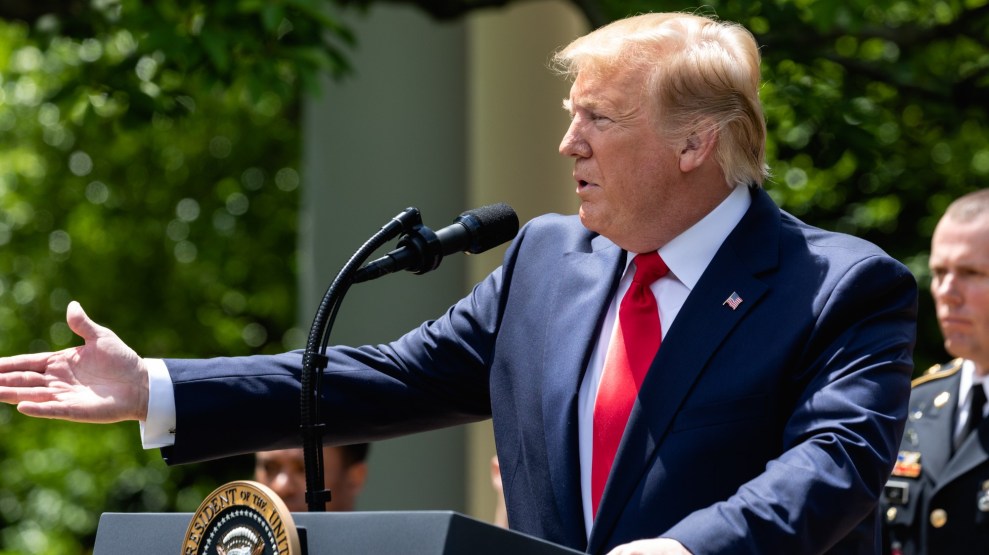 A West Point graduation ceremony that would not have happened the way it did without the unbidden intervention of Donald Trump finally took place Saturday morning. It was the second time in a month that’s not even halfway over that the president has involved the military in a stunt that risked the health of Americans for his own political benefit.

As with many of Trump’s less improvisational speeches, it was heavy on the tough talk and praise and light on the throwaway conspiracy-mongering and insult comedy. The dissonances were especially sharp today. The same president who only this morning retweeted bromides against the “socialist Left” and “Radical Left Democrats” made a plea for…unity?

“The members of this class have come from every state in our union. You have come from the farms and the cities, from states big and small, and from every race, religion, color, and creed,” he told the assembled 1,107 cadets, who processed into the ceremony wearing masks and sat several feet apart on the academy’s parade field. “You exemplify the power of shared national purpose to transcend all differences and achieve true unity.

“What has historically made America unique is the durability of its institutions against the passions and prejudices of the moment,” Trump said, perhaps forgetting that he more than any other figure has contributed to the “prejudices” of the moment and the undermining of the country’s institutions. Sounding a bit like a Super Bowl car ad, he added, “When times are turbulent, when the road is rough, what matters most is that which is permanent, timeless, enduring, and eternal.”

For West Point graduates, commencement marks a transition into active-duty military service, but rarely has there ever been a more tumultuous time to be part of the Army. Trump frequently involves the military in political stunts, from a needless deployment of troops on the Southern border before the midterm elections to the obnoxious Bible stunt in which he cleared a peaceful protest outside the White House so senior administration officials, including the nation’s highest-ranking military officer, could join him for a photo op outside a church.

Trump’s bellicose behavior—and the initial reluctance from some officials, including Defense Secretary Mark Esper, a West Point graduate himself, to challenge him—led to a flurry of stern condemnations from former military officers in recent weeks and, most recently, an extraordinary open letter signed by more than 500 West Point graduates. “We are concerned that fellow graduates serving in senior-level, public positions are failing to uphold their oath of office and their commitment to Duty, Honor, Country,” the letter stated. “Their actions threaten the credibility of an apolitical military.” Gen. Mark Milley, Trump’s senior military adviser, even apologized for his role in the Bible stunt, saying his presence “created a perception of the military involved in domestic politics.” Turbulent times, indeed!

Saturday’s commencement was another stunt, this one made particularly egregious by the fact that it required assembling a graduating class from across the country during a global pandemic. Despite most universities, including the Naval Academy, opting for a virtual commencement, Trump abruptly stated his plan in March to address cadets at an in-person ceremony. The surprise announcement, occurring after cadets had already been sent home, required hundreds of students to return to West Point, located in a state with more than twice as many coronavirus infections as any other. Thanks to Trump’s decision, that number has only increased. Earlier this month, the Army screened all returning graduates and acknowledged that 1.5 percent of the class, roughly 15 students, had tested positive for COVID-19.

There was no need for an in-person graduation ceremony. To accommodate Trump’s persistent desire for a big speech, returning cadets risked their health to return to campus. Family members and friends were not even allowed to attend, denying them a chance to enjoy graduation with their loved ones. The whole thing was unnecessary, a reminder that if anything is “permanent, timeless, enduring, and eternal,” it’s Trump’s desire to satisfy his own wants, all else be damned.