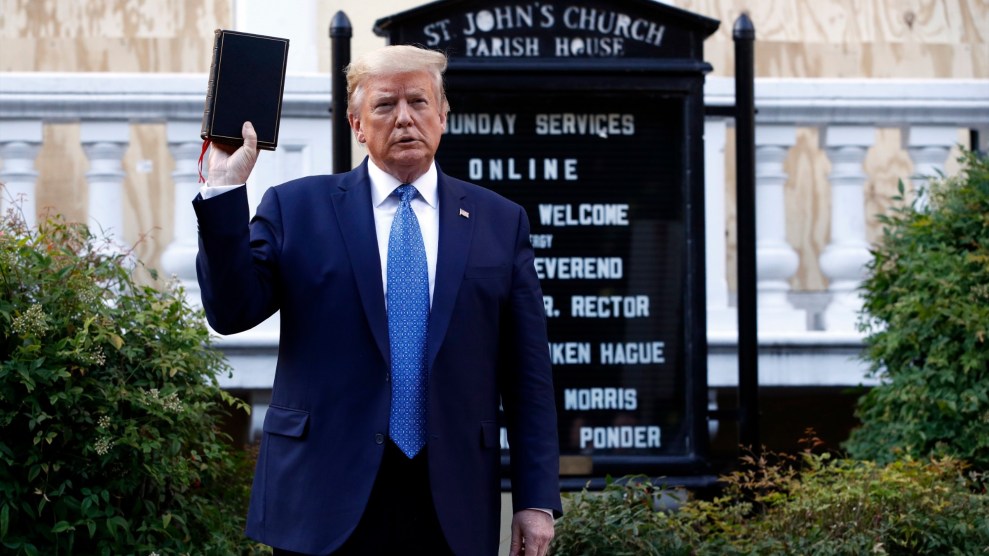 A senior National Guard officer will tell Congress that the US Park Police engaged in “an unprovoked escalation and excessive use of force” when the agency forcefully cleared peaceful protesters from in front of the White House ahead of President Donald Trump’s infamous June 1 photo op at a nearby church.

“At no time did I feel threatened by the protestors or assess them to be violent,” Adam DeMarco—a major in the Washington, DC, Guard, who was present during the operation to clear Lafayette Square—says in written testimony prepared for a House Natural Resources Committee hearing set for Tuesday. “In addition, considering the principles of proportionality of force and the fundamental strategy of graduated responses specific to civil disturbance operations, it was my observation that the use of force against demonstrators in the clearing operation was an unnecessary escalation of the use of force.”

The Park Police’s media office did not respond Monday to inquiries. The Park Police is part of the National Park Service, which manages federal parkland, including Lafayette Square and much of downtown DC. The Natural Resources Committee oversees the agency.

DeMarco—a West Point graduate who spent five years on active duty, including a combat deployment in Iraq—says he has served in the National Guard since leaving active duty in 2014. In 2018, he ran for Congress in a Democratic primary, unsuccessfully challenging Rep. John Sarbanes (D-Md.). On May 29, DeMarco, along with the rest of the DC National Guard, was activated to help respond to protests, looting, and property damage that followed the killing of George Floyd by police in Minneapolis. The Guard troops were part of a massive federal mobilization that appears to have served as a template of sorts for federal responses to protests in other cities, including the ongoing crackdown against demonstrators in Portland.

On June 1, DeMarco was tapped to serve as a liaison between the DC Guard and the Park Police at Lafayette Square; he was one of the senior officers among the 250 DC Guard members present that day. He says that after arriving at the White House complex at 5:35 p.m., he learned that the DC Guard’s was tasked, along with the Secret Service, with helping the Park Police clear demonstrators from around Lafayette Square. He said he understood that action would take place after 7 p.m., when a curfew imposed by DC Mayor Muriel Bowser was scheduled to take effect.

DeMarco says he noticed Attorney General William Barr and General Mark Milley, the chairman of the Joint Chiefs of Staff, observing the federal personnel facing a crowd of about 2,000 protesters. DeMarco says he spoke with Milley, who instructed him to ensure that National Guard personnel remain calm and respect demonstrators’ First Amendment rights. (Milley has since said that he regrets his actions that day, in particular walking with Trump later to St. John’s Church for the president’s photo op. “I should not have been there,” Milley said. “My presence in that moment and in that environment created a perception of the military involved in domestic politics.”)

DeMarco says he saw Barr conferring with Park Police officials shortly after 6 p.m. At around 6:20 p.m., DeMarco says—not long after Barr and Milley left—”the Park Police issued the first of three warning announcements to the demonstrators, directing them to disperse.”

These warnings were issued via a megaphone about 50 yards from protesters, DeMarco recounts. He says from his position “approximately 20 yards from the demonstrators, the announcements were barely audible and I saw no indication that the demonstrators were cognizant of the warnings to disperse.” Barr has claimed that protesters ignored instructions to leave the area, but DeMarco’s testimony bolsters the accounts of people present, as well as video of the events, that the warnings were inaudible to the crowd outside the White House.

After these warnings, at around 6:30 p.m., federal agents used tear gas and excessive physical force to clear the area, DeMarco says. Park Police have previously denied using tear gas, but have acknowledged using pepper balls and smoke canisters against protesters. And the White House, asserting a distinction between pepper balls and tear gas, initially demanded corrections from publications, including Mother Jones, that reported the use of tear gas. But as Mother Jones explained at the time, pepper balls are a form of tear gas:

The distinction only matters if you’re treating medical damage or covering your ass; the Centers for Disease Control calls every such chemical “tear gas,” including CS, OC, and others. But for police, “pepper balls”—dense projectiles containing OC, which the Park Police insist they used—are very convenient.

Regardless, DeMarco says that both CS tear gas and pepper balls were used to clear the area—despite the fact that a Park Police official told him before and during the operation that tear gas would not be used. “But I could feel irritation in my eyes and nose, and based on my previous exposure to tear gas in my training at West Point and later in my Army training, I recognized that irritation as effects consistent with CS or ‘tear gas,'” he says. “And later that evening, I found spent tear gas canisters on the street nearby.”

DeMarco, who was with National Guard troops moving into the area being cleared, says he watched as federal agents attacked fleeing protesters:

The Park Police have claimed the area around the White House was cleared so that a fence could be erected around Lafayette Square, not to facilitate Trump’s photo opportunity. But DeMarco says fencing materials did not even arrive until 9 pm, calling into question the need to clear the area prior to DC’s 7 p.m. curfew.

DeMarco notes that in the two days leading up to June 1, he learned that six DC National Guard members had sustained injuries “as a result of violent unrest outside of the White House” and that “federal law enforcement officers from the Park Police and the US Secret Service had sustained injuries.” But he says the protesters attacked by federal agents on June 1 were nonviolent.

“From my observation, those demonstrators—our fellow American citizens—were engaged in the peaceful expression of their First Amendment rights,” he says. “Yet they were subjected to an unprovoked escalation and excessive use of force.”