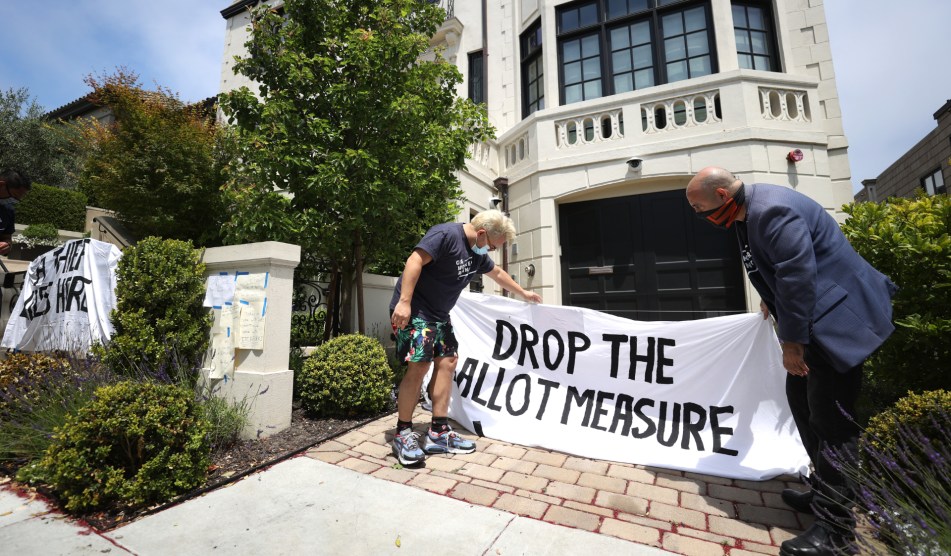 Protesters hang a banner during a demonstration in front of the home of Uber CEO Dara Khosrowshahi.Justin Sullivan/Getty

The California ballot measure backed by Uber, Lyft, and Doordash and slated to appear on the ballot this November would exempt gig companies from a new law tightening the rules on who is and isn’t a contractor.

Proposition 22 would also “create a permanent underclass of workers,” according to a new report by the Partnership for Working Families and the National Employment Law Project. A spokesperson for Prop 22 calls the study a piece of “unabashed campaign propaganda.”

The backdrop of the debate is AB 5, which, at least in theory, forced gig companies to consider their drivers as full employees, not contractors, and thus eligible for overtime pay, health benefits, and paid time off—a historic victory for workers in tech’s backyard. In exempting rideshare and delivery companies from AB 5, the initiative, called the Protect App-Based Drivers and Services Act, does not repeal the law but sidesteps it.

Under a provision called “Protecting Independence,” Prop 22 gives “app-based drivers” the freedom to work for “transportation network companies” without full employment “notwithstanding any other provision of law” if the worker has control of their hours and ability to turn down work. The “any other provision of the law” would be AB 5, which codified an employment test that’s used in labor codes around the country. The test requires more for independent contractor status than just ability to set one’s own hours.

In carving out gig delivery workers, Prop 22 guarantees a number of new benefits to contractors to make up for non-employee status: discrimination protections, health benefits, and an earnings floor. The gig companies have offered this as a “new progressive framework,” as Uber calls it. The idea is that the gig model is not misclassification of workers without benefits but innovative job creation in need of a few tweaks to add benefits traditionally tied to employment.

But researchers have said these benefits come far short of the slew of protections offered by full employment under the law, and even block out core protections, while masquerading as an upgrade.

“These companies have created a noxious combination that serves only one purpose: protect corporate wealth and power at the expense of worker health, safety, and dignity,” the researchers write.

These gig companies refuse to obey the law when it comes to providing benefits to workers. It’s no surprise that they’re now backing #Prop22, which would undo decades of labor protections in CA: https://t.co/v25vumadgn #RiggingTheGig #NoOnProp22 #SickofGigGreed pic.twitter.com/mzB6ozi5V8

Take driver’s pay. Prop 22 states that drivers would earn at least 120 percent of the local minimum wage—a pay bump. But NELP estimates that passing Prop 22 would actually decrease wages by $500 a week. The discrepancy is in defining hours worked. Uber’s proposition uses “engaged time,” which only includes the time when “an app-based driver accepts a rideshare request or delivery request to when the app-based driver completes that rideshare request or delivery request.” NELP says wait time, the time when drivers are looking for riders to pick up, should be included too. This can lead to widely different estimates of how much drivers are paid per hour.

The Prop 22 campaign promise to give full-time drivers health benefits has the same flaw, says the report. While the initiative says it drivers who work 25 hours a week or more will get a 100 percent health subsidy based on averaging Affordable Care Act premiums, the report estimates drivers would actually need to work “more than 39 hours a week” for that benefit. Employment would offer an easier road to healthcare, researchers say.

Similarly, discrimination protections, the report says, are actually better if you’re employed. And the same goes for the much-touted “flexibility” of deciding one’s own schedule. “Real flexibility at work means having access to real paid time off,” says Rebecca Smith of the National Employment Law Project. Under the ballot measure, there would be no guarantee of paid sick leave, paid family leave, or unemployment compensation.

Crucially, the measure would also prevent local municipalities from setting their own standards for how gig drivers are treated. By creating a statewide standard, cities would not be able to pass local ordinances to boost driver pay or guarantee health protections, as happened in San Francisco when the city council passed a sick pay rule in early April. And, by keeping drivers from full employment, it would effectively bar workers from unionizing. If workers did want to form a union, says Ray Fuentes, a co-author of the report, it would need approval from seven-eighths of the state legislature.

Meanwhile, Attorney General Xavier Becerra is currently suing to force Uber and Lyft to actual enforce AB 5 and employ their fleet of independent contractors as full employees—with the benefits required in California of unemployment insurance and paid sick leave—as soon as possible.

The conditions of gig worker have only gotten worse during the pandemic. Yet large gig companies have consolidated and expanded. Uber bought Postmates, a food delivery service, for $2.65 billion. And it acquired Cornershop, an international grocery delivery app, with plans to expand even more. With more consolidation, workers have less opportunities to move between apps—switching from Postmates to Uber if the pay is better. If there is only Uber, you have to deliver for them.

“I have constantly seen my wages decrease while their profits grow,” said Carlos Ramos, a Lyft driver affiliated with Gig Workers Rising.