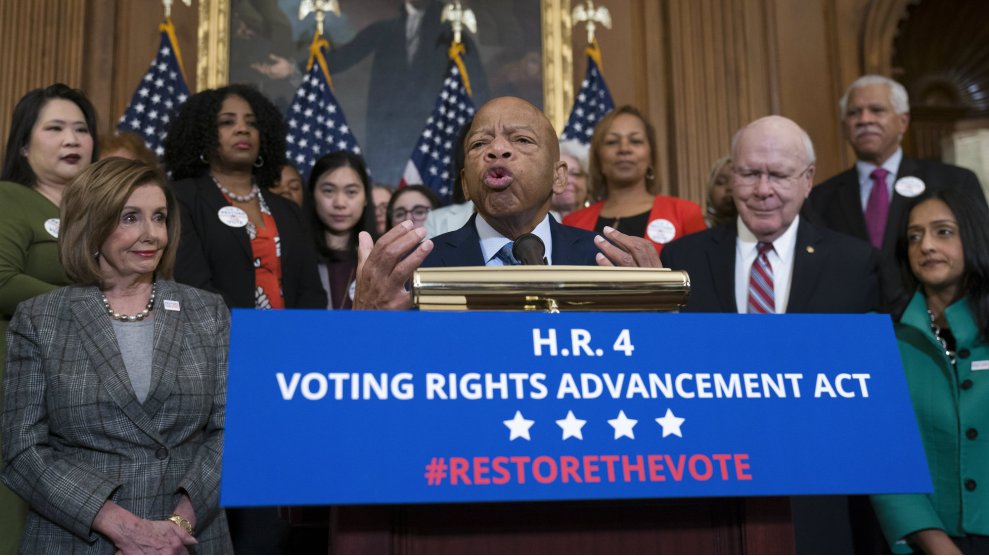 When John Lewis succumbed to pancreatic cancer on Friday night, the tributes and statements from elected officials and other public figures honoring the 80-year-old civil rights hero came pouring in. The ironies have already been noted, as certain politicians who spent decades fighting against voting rights lionized a Black man who was nearly killed fighting for the right to vote.

Donald Trump, however, continued doing bad tweets about Joe Biden and then went to play golf (as the president does in the middle of a pandemic and economic crisis). The national media was outraged by his callousness.

..The fact that no WH statement on the death of @repjohnlewis has yet been issued raises questions. Incompetence? Malevolence? Would Trump have responded differently than Ike, JFK and LBJ to the civil rights movement in the late 50s and early 60s?

And yet, what purpose would an insincere statement from an obviously racist president who held Lewis and people like him in contempt serve? Trump finally issued the requisite thoughts-and-prayers bromides before lowering the flag at the White House for less than 24 hours, but the very superficiality of his terse response has an unintended benefit: His near silence provides an accurate record of this historic moment—in contrast to the opportunistic efforts made by other members of his party to align themselves with Lewis.

Trump’s near silence provides an accurate record of this historical moment—in contrast to the opportunistic efforts made by other members of his party to align themselves with Lewis.

There they all were: Sen. Ted Cruz (R-Texas), for instance, who is opposed to expanding absentee ballot voting in Texas because of false fears of mass voter fraud; Sen. Marco Rubio (R-Fl.) who initially tweeted a photo of him and Elijah Cummings, the late congressman from Maryland. And, in what must be a gold standard of hypocrisy at the gravesite, this tribute from Georgia Gov. Brian Kemp, who as secretary of state purged Georgia’s voter rolls, while running for governor.

Congressman John Lewis was a Civil Rights hero, freedom fighter, devoted public servant, and beloved Georgian who changed our world in a profound way. The Kemp Family is praying for his loved ones as they honor his life & mourn his passing. #RIPJohnLewis https://t.co/PnbhMCTHz9

As I thought about the rush to put out statements by those who were committed to denying millions the right to vote, about the passing of a man, who was beaten within an inch of his life because he wanted to secure the right to vote, I realized I was watching the time-honored practice of whitewashing of history. Over and over again, people who are attacked while fighting for the rights of the marginalized are embraced by the group that did the attacking. The duplicity was inevitable, but also useful: We witnessed the rewriting of history that has taken place with other great Civil Rights leaders by those who have done everything they can to oppose what they fought for in real time, unlike what happened with Rev. Martin Luther King, Jr., which took place over years. For once, I almost appreciated Trump’s inability to be decent or useful.

John Lewis, who served as the representative for Georgia’s 5th district from 1987 until his death, was a central figure in the Civil Rights Movement. A personal friend of Martin Luther King, Jr., Lewis was the chairman of the Student Nonviolent Coordinating Committee from 1963 until 1966 and was one of the organizers of the 1963 March on Washington. In 1965, while marching for voting rights in Alabama on the Edmund Pettus bridge—named for a leader in the Ku Klux Klan—Lewis’ skull was fractured by Alabama State troopers. The Voting Rights Act was signed into law by Lyndon B. Johnson later that year, and images of the brutality inflicted on Lewis made a difference in passing the legislation. But after years of Republican coordinated voter suppression campaigns—which included partisan gerrymandering, bogus voter ID measures, and closing down polling locations in poor and Black communities—the original act has been gutted by the very people who were tweeting their affection for Lewis over the weekend. While Lewis kept fighting for it until he died, his life’s work is still incomplete.

In the 1960s, when Republicans started to use racism as an appeal to white Southern voters, many who held the ideologies that make up the GOP today opposed civil rights. Barry Goldwater, the Arizona Senator who ran on the Republican ticket against Lyndon Johnson, represented the emerging conservative wing. They wanted to slash spending for welfare programs, voted against the Civil Rights Act of 1964, and criticized the US Supreme Court’s decision to integrate the schools.

Fast forward to 1983, when the question of making King’s birthday a national holiday came up for a vote in Congress. Many Republicans opposed it—including Ronald Reagan, John McCain, and Sen. Chuck Grassley (R-Iowa). On Saturday, Grassley tepidly honored Lewis by calling him a “pioneer civil rights ldr just like MLK.”

America is mourning the loss of Congressman John Lewis We lost a pioneer civil rights ldr just like MLK. I didn’t hv lots of discussion w John in 34 yrs of serving together but every time I did it was always pleasant He was a dedicated public servant & his legacy lives on

The individual who embodied just how shameless Republicans can be is Senate Majority Leader Mitch McConnell (R-Ky.), who has been tireless in his efforts to gut the Voting Rights Act. As my colleague Ari Berman wrote, a resolution to restore the act is sitting on the Majority Leader’s desk untouched:

In December 2019, Lewis presided over the House as it passed legislation to restore and modernize the Voting Rights Act, requiring states with a long history of voting discrimination to once again get federal approval for any changes to voting procedures. In a primary season marred by voting problems, like six-hour lines in Lewis’ home state of Georgia, it’s been sitting on Mitch McConnell’s desk for 225 days.

McConnell’s statement honoring Lewis was thick with admiration for the late congressman. “Our great nation’s history has only bent towards justice because great men like John Lewis took it upon themselves to help bend it,” McConnell said. “Our nation will never forget this American hero.” And lest anyone think that they weren’t close, there’s the indelible image of the two of them holding hands, singing “We Shall Overcome” on the 40th anniversary of King’s assassination.

My statement on the passing of Congressman John Lewis: pic.twitter.com/sFuU8cqPc8

Does McConnell believe that historians looking back at this statement would come to the conclusion that the Republican Party stood with John Lewis and all he fought for?

“The only way for the citizens of a nation to know and understand their history is to know the whole story.”

In 2014, the Southern Poverty Law Center released a study that examined the way we teach civil rights history in the United States. Henry Louis Gates, Jr. a Black Harvard professor and scholar of African American history had been arrested by Cambridge police on his own door step. He became embroiled in a national scandal after then President Barack Obama said the police officer “acted stupidly.” Gates wrote one of the forewords to the report, summing up the nature and the dangers of whitewashing history. “[U]ntil the contributions of African Americans become second nature to all American school children, desperate calls for one more ‘conversation about race’ are destined to repeat themselves—in an endless cycle—following the next race-based hate crime,” he wrote. “The only way for the citizens of a nation to know and understand their history is to know the whole story, not just the chapters that reinforce uncontested assumptions while carving out counter-narratives as set-asides and add-ons only if there is time.”

If society’s tendency to whitewash Black history and recast some villains in a more flattering light continues, future historians just might struggle to tell the real story of what happened in 2020. I won’t be surprised when, in a few decades, conservatives will argue that it was their party that supported the Black Lives Matter movement.

It’s obvious why Republicans are so eager to take advantage of Lewis’ passing to rewrite their legacy. This November, amidst the backdrop of a pandemic that the government has handled as deftly as a baby feeding herself for the first time, an economic catastrophe, and a racial justice reckoning across the country, Americans will head to the polls. In a Washington Post-ABC poll, 67 percent of Joe Biden supporters said defeating Donald Trump was more important than getting the former vice president elected.

Is this what years of gerrymandering, voter suppression, and undoing what Lewis and his peers fought and died for has resulted in? An incompetent leader who is either unable or unwilling to grasp the seriousness of the pandemic that has killed 140,000 people so far—disproportionately Black and brown people—or the handle the economic crisis that it spurred. McConnell is right when he says that no one will forget Lewis. But he is certainly hoping that you forget which side of history the Republican Party stood on. Fortunately, in his response to Lewis’ death and so many other actions, President Trump is there to remind us.