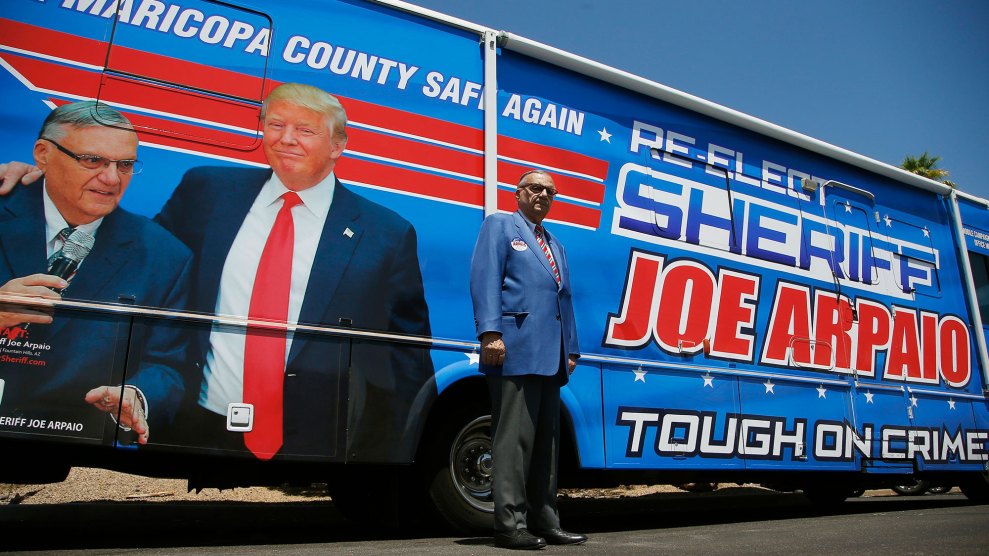 Joe Arpaio, the self-proclaimed “toughest sheriff” in the country, lost a shot at his old job in Arizona’s Maricopa County. The 88-year-old’s defeat in the Republican primary for sheriff—by just a few thousand votes—is his third failed campaign in the past four years; he was bested by his ex-chief deputy, Jerry Sheridan, who will face the Democratic incumbent, Paul Penzone, in the fall. Arpaio might be done in Arizona GOP politics, but Arpaioism is not.

Tuesday’s primary wasn’t called until Friday evening. With 2,385 ballots left to be counted, Sheridan had 37 percent of the vote to Arpaio’s 36 percent, a difference of 6,280 votes out of more than 420,000 votes cast.

Observers were watching the primary race in Arizona’s largest county, a Republican stronghold, for signs of President Trump’s fortunes in a state that’s tilting toward Joe Biden. Arpaio had so aligned himself with the president that he’d plastered a giant photo of himself with Trump on the side of his tour bus. For months, he campaigned on the message “Make Maricopa County Safe Again,” and like a true Trumper, he downplayed the coronavirus pandemic by holding meet-and-greet events, not wearing a mask, and posing for photos with his followers without physically distancing.

Meeting supporters everyday in the Arizona heat. I will never surrender! We must make Maricopa County Safe Again! pic.twitter.com/WQ9ggdaPYN

What the narrow result might mean for Trump in November is anyone’s guess, but it can tell us a little about Arpaio and his legacy. Arpaio led the sheriff’s department in Maricopa for 24 years until he lost a reelection campaign in 2016. He gained national attention in the ’90s for his flagrant and theatrical racism. He vilified immigrants and Latinx people constantly, and his supporters loved him for it. He set up the now infamous “tent city” where he kept inmates outdoors without any cooling in the summer (with temperatures clocking in at 145 degrees inside the tents) or heat in the winter. He had male inmates wear pink underwear in hopes of humiliating them. He made all inmates wear old-school black-and-white–striped prison uniforms and forced them to work in chain gangs in what Arpaio himself described as a “concentration camp.” (The tent city closed after Arpaio left his post in 2016.)

Let’s not forget that, in 2017, Arpaio was convicted of criminal contempt after ignoring a federal judge’s order from years prior to stop racially profiling Latinxs in Maricopa County. But as we’ve seen a handful of times in the past few years, criminal convictions don’t really stick when you’ve got the president on your side. In August 2017, just months after Arpaio’s conviction, Trump pardoned his die-hard fan, calling him a “patriot.” The pardon set the stage for Arpaio’s unsuccessful bid to fill the US Senate seat left vacant by Jeff Flake.

Heading into Tuesday’s primary, Arpaio had raised more money than any of his rivals for the seat. He’d also outraised Penzone. As of February, at least, most of his large donations had come from out-of-state supporters.

The outcome suggests that Maricopa County Republicans have not totally lost their ardor for Arpaio since his heyday. If anything, the votes cast for him and for his former chief deputy represented a fairly hearty endorsement of the ideology he embodies. During the primary campaign, Sheridan took care to separate himself from Arpaio, saying he wasn’t in it for the media attention like his former boss was. But Sheridan was in Arpaio’s leadership team when the sheriff’s office was riddled with controversy. They worked so closely together that Sheridan, too, was convicted of contempt of court for racially profiling Latinx residents in Maricopa. On his website, he promises to bring back the tent city “in some form.” If you were watching this election as a national bellwether for Trump, you might also keep an eye on what it augurs for Trumpism and the GOP.