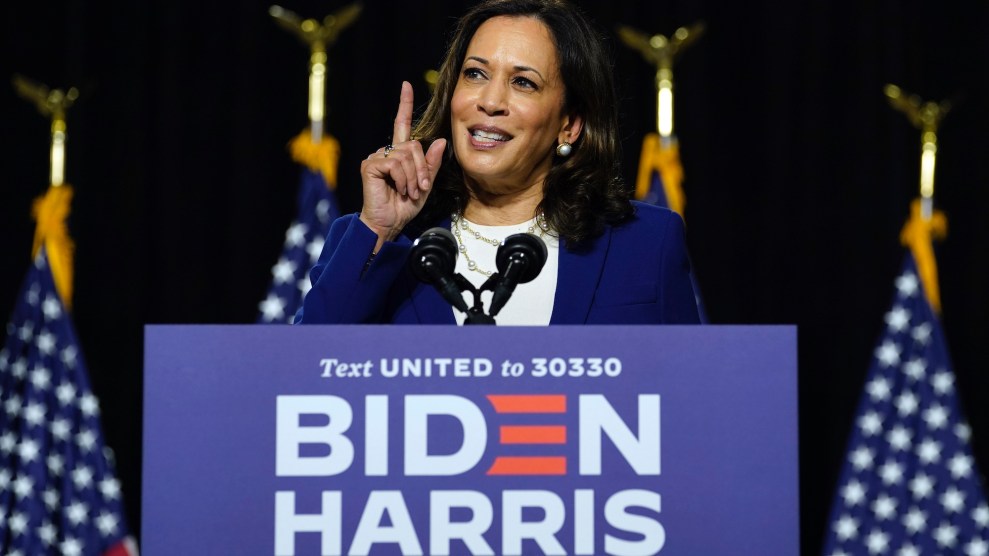 Sen. Kamala Harris (D-Calif.) made her mark in the Democratic presidential primary by leaning on her prosecutorial bona fides. And during her first remarks as Joe Biden’s running mate on Wednesday afternoon, Harris once again flashed those credentials—this time, vowing to unleash them on President Donald Trump and Vice President Mike Pence.

Harris, the first-ever African American and Asian American woman on a major party ticket, devoted a sizable portion of her remarks to denigrating Trump’s response to the pandemic. She slammed Trump’s “delusional belief that he knows better than the experts” and blamed him for ruining America’s global reputation. “Like everything else he inherited, he ran it straight into the ground,” she said, reminding voters that they “don’t have to accept the failed government” that Trump has led.

“Let me tell you, as someone who has presented my fair share of arguments in court,” Harris said, “the case against Trump and Pence is open and shut.”

Throughout the spring, Biden’s advisers and allies told reporters that Biden sought a running mate who shared his vision for the country, a keystone of the tight-knit relationship he aimed to forge in the model of what he shared with Barack Obama. In Harris, Biden finds an ideological equal—which is to say, someone who isn’t much concerned with ideology at all. Both Biden and Harris prefer the pragmatic to the principled, the politically feasible over the soaring ideal.

Much of Biden’s introduction of Harris, which took place in a nearly empty high school auditorium in Wilmington, Delaware, centered on her character. The former vice president described his new running mate as “smart,” “tough,” “experienced,” and a “proven fighter.” Someone who has “worked hard” and “never backed down from a challenge.” Harris responded in kind, remarking on Biden’s “empathy,” “compassion” and “sense of duty.” She shared a story about her friendship with Biden’s late son, Beau, who collaborated with Harris as Delaware attorney general when she held the same post in California. “I would ask him, ‘Where’d you get that?’” Harris recalled when she’d ask Beau about his good character. The answer he gave her, she said, was always, “My dad.”

While some Democrats had raised concerns that such a pragmatic pairing would perhaps deflate enthusiasm among the party’s liberal base, there’s no indication that has happened. If anything, choosing Harris has thus far inoculated the campaign against a more vexing problem, as my colleague Tim Murphy writes: A catchy, sexist characterization. Despite his best efforts, Trump has so far failed to make any sexist attacks on Harris stick—an effort so predictable that “you could have set your watch to it,” Biden said during his remarks. Trump called Harris “nasty” for the prosecutorial touch she has taken with Trump nominees who come before her Senate committees for confirmation, an attack on the very thing she’s touting as her key asset. “Is anyone surprised that Donald Trump has a problem with strong women?” Biden said.

Biden’s selection of Harris has put the spotlight on a presidential campaign that has flown under the radar for the last several months as President Trump’s response to the pandemic hogged the limelight. With national attention wholly on Biden again for the first time in months, the former vice president used the opportunity to lambast Trump for his failures to contain the virus and his racist overtures. His appearance with Harris on Wednesday marked three years since the “Unite the Right” rally in Charlottesville, Virginia, something Biden remarked on. “Remember those white supremacists? Those Klansmen?” he said, “spewing the same anti-Semitic bile we heard in Hitler’s Germany the 1930s?”

Biden’s decision to put Harris on the ticket is itself a retort to the race-baiting that Trump engaged in on that occasion. And Harris acknowledged that in her remarks as she reflected on her own place in history. “Today, [Biden] takes his place in the ongoing story of America’s march toward equality and justice—as the only person who served alongside the first Black President, and has chosen the first Black woman as his running mate,” she said.