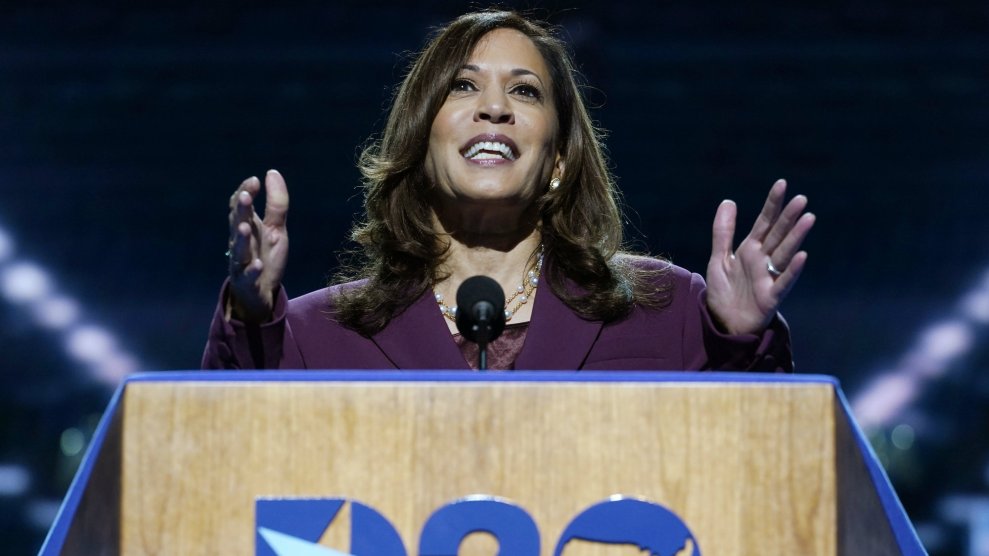 On Wednesday night Sen. Kamala Harris (D-Calif.) accepted the Democratic nomination for vice president and became the first Black and South Asian woman to be nominated for the position on a major party’s ticket. Her acceptance speech, which was introduced with a video montage of her loved ones and little Black and Brown girls looking towards the future, included a simple line about her mother: She “gave birth to me at a Kaiser Hospital in Oakland, California.”

Normally, such a line would be easy to ignore, just another requisite detail for a garden variety political biography. But it was very deliberate and meaningful: As soon as the biracial daughter of immigrants was selected to be Joe Biden’s running mate, the same people who frequently malign identity politics returned to their familiar playbook of challenging who can claim American identity.

Birtherism is back. The practice of questioning if someone is American enough to hold office had an early appearance with President John F. Kennedy’s Catholicism, but it really hit the mainstream when Barack Obama was elected president. Many children of immigrants and people of color like me, however, will tell you that our legitimacy has been questioned for our entire lives. Making some part of the population illegitimate is the whole point reinforcing their power and the status quo.

After all, Donald Trump became a mainstream politician only after he championed the racist lie that Barack Obama was secretly born in Kenya and thus could not be president. After the GOP organized their party around their single-minded hatred of Obama, it opened the door for their most toxic members to gain control. And if the whole purpose of the Republican Party was to undermine at every opportunity this interloper who had the audacity to be president, how could one of the most prominent birthers not become its leader? Trump catapulted to the top of the Republican power structure, because of his embrace of the most toxic aspects of the party, not in spite of them.

Trump catapulted to the top of the Republican power structure, because of his embrace of the most toxic aspects of the party, not in spite of them.

So now, when birtherism reappears to attack Harris, you’d think we’d be prepared to stop the vile lie in its tracks. It’s not as if the birther-in-chief has delivered us to the Promised Land. Just look at where we are right now, as a country. More than 170,000 coronavirus deaths. Federal troops invading American cities. An unparalleled economic crisis. If birtherism’s first iteration gave us Donald Trump, what horrors could part two unleash? But instead of treating the racist trope like a serious threat, affecting not only Kamala Harris but the millions of us just like her, the media fell back on perhaps the most tiring refrain of the Trump presidency: It’s just a distraction.

DO NOT GET DISTRACTED BY THIS HARRIS ELECTION ELIGIBILITY NONSENSE.

IT’S NOT A POSSIBILITY
IT’S A REALITY

There's plenty going on right now. Maybe the media should keep their eyes on stories that are real, not ones that are not. https://t.co/lnXzAC5g29

It’s infuriating to watch top media figures survey the last four years and conclude that every racist uttering is simply a distraction from what the president is really doing. The fact that his relentless and direct attacks on Black and Brown people can be seen as a non-issue is the central and defining failure of the American experiment.

The fact that his relentless and direct attacks on Black and Brown people can be seen as a non-issue is the central and defining failure of the American experiment.

Hatred of the other defines nearly everything the Trump administration does. When the coronavirus came to the United States, Trump chose xenophobia instead of public health. He blamed China, using several derisive terms to refer to the virus and touted closing the borders with China (which effectively did nothing to stop the spread) as a win against the pandemic. Once it became clear that the disease was very much an American problem, Trump doubled down on the racism as his public health strategy. He favored Republican governors who he believed to be in charge of his white base. He derided and punished political leaders who he perceived to run cities and states where the wrong people—in other words Black and Brown ones, immigrants, and Democrats—live.

If that’s not enough to convince you that Trump’s racist attacks have real world impact, consider how for so many people, it feels like a personal attack, a way of amplifying the racism that always has been a part of our lives. My parents are from Haiti. While they’re American citizens now, they were undocumented immigrants decades ago. I’ve heard it all. A “friend” once asked me if my parents even paid taxes. As a child, a white neighbor interrogated me about my father’s background. Was he a diplomat? What did he do for a living? I didn’t understand until years later that she was trying to figure out how a family like ours could live in her middle class neighborhood. I’ve been told to go back to where I came from. (My mother gave birth to me in a Brooklyn hospital.) When they debate if the 14th Amendment really means that anyone born in the United States is a citizen, and when they talk about whether Black immigrants should be considered American, they’re talking about me. They are talking about my family, and my friends.

And the racist lie about Obama and now Harris won’t stay contained. It spreads and infects every aspect of American life. Every racist comment signals to his supporters—who are cops, and teachers, and nurses, the people who live in our communities—that he understands them and their feelings are valid. Consider how many police unions have stood behind Trump and championed his policies, and in doing so affirm that they see you as being just a little less worthy. Maybe your child’s teacher doesn’t even bother with her anymore, because if America had a sensible immigration policy she wouldn’t be enjoying our free public schools. That doctor thinks your skin color makes you impervious to pain and medically different from others, so why bother with the proper treatment?

After birtherism made Trump a household name, he chose to stake his candidacy to immigration reform that, in his case, was simple xenophobia. He derided Mexican immigrants as rapists and murderers and referred to Haiti, El Salvador, and African countries as shitholes. One of his first acts as president was banning Muslims from entering the country. Like his Democratic and Republican predecessors before him, Trump used the federal government to deport immigrants, but unlike his predecessors, he did not even bother to soften the rhetoric around American immigration policy. Building a wall to keep immigrants out became a rallying cry and a physical fact.

Donald Trump envisions an America free of criticism, free of immigrants, and free of The Others. The only way to achieve his dream is to delegitimize anyone who he decides doesn’t fit in. Strip them of their ability to call themselves Americans. Question why they’re even here. Because if you’re not one of them, what right do you have to housing, or health care, or safety, or peace, much less elected office? That’s the cost of ignoring birtherism. The racism isn’t a distraction. It’s everything.