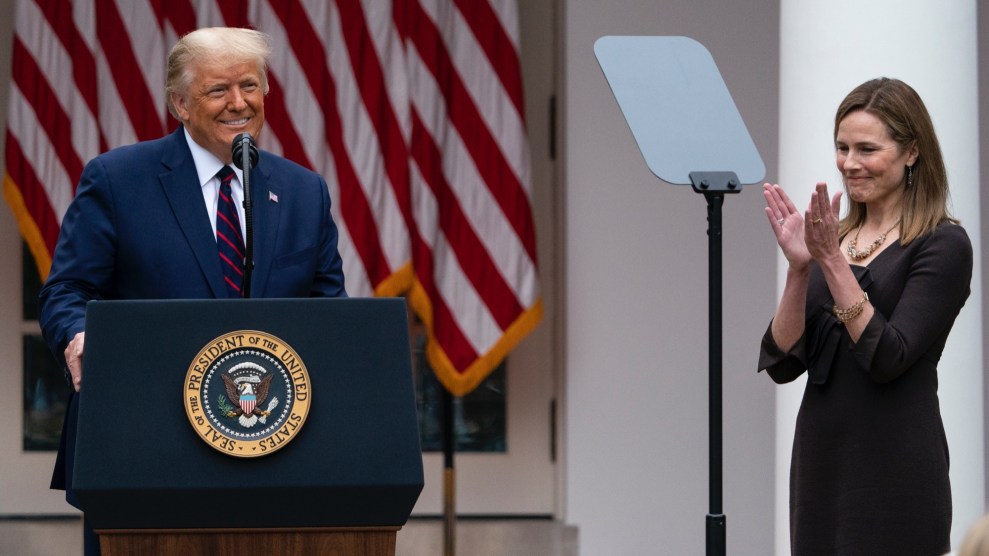 President Donald Trump kicked off his Sunday by tweeting out a call for Joe Biden to take a drug test before their debate next week, adding that he’d take one too. But that wasn’t his dumbest tweet of the morning.

Trump also celebrated the prospect that the Supreme Court will throw out the Affordable Care Act, a.k.a. Obamacare. “Would be a big WIN For the USA!” he tweeted.

Obamacare will be replaced with a MUCH better, and FAR cheaper, alternative if it is terminated in the Supreme Court. Would be a big WIN for the USA!

The Trump administration is enthusiastically supporting a lawsuit filed by Republican attorneys general that would throw out the entire ACA. If it succeeds, more than 20 million people could lose their health insurance and protections for the more than 130 million Americans with preexisting conditions could disappear—in the midst of a pandemic.

The Supreme Court is scheduled to hear the case just after the election in November. If the Republican-run Senate can get Amy Coney Barrett confirmed to take Justice Ruth Bader Ginsburg’s seat by Election Day, she may be seated in time to hear the case.

In his tweet, Trump once again promised to replace Obamacare with something bigger and better. He has yet to produce this unseen plan for replacing the Affordable Care Act. He has asserted that he wants to maintain protections for people with preexisting conditions, but beyond issuing legally meaningless executive orders that reiterate that view, he has offered no specific proposal to keep those people from being kicked off their health plans.

Trump’s tweet plays into Democrats’ criticisms of Barrett‘s record on health care. In 2012, she ripped the Supreme Court for upholding Obamacare in a 2012 ruling, calling the decision “illegitimate.” Democrats also want to use the fight over Ginsburg’s seat to highlight the threat that Trump’s reelection would pose to Obamacare. Polls consistently show Democrats enjoy a decisive advantage on this issue. A new New York Times poll finds that 57 percent of Americans support the ACA.

In a letter sent to Democratic senators on Saturday, Senate Minority Leader Chuck Schumer urged them to focus on healthcare while discussing Barrett. “All the data show that with COVID raging, the number one priority for the American people is health care—its affordability, accessibility and quality,” Schumer wrote in the letter, as reported by Politico. “We must focus like a laser on health care because Judge Barrett’s record is so clear on this issue.”

Democratic lawmakers took up this argument on the Sunday talk shows. “It defies comprehension why President Trump would continue in his efforts to strip away from the American people pre-existing discrimination protection,” Sen. Chris Coons (D-Del.) said on CBS’ Face the Nation. “President Trump is making it clear a vote for Judge Barrett to be on the Supreme Court is a vote to repeal the ACA and take away health care protection from a majority of Americans during a pandemic.”