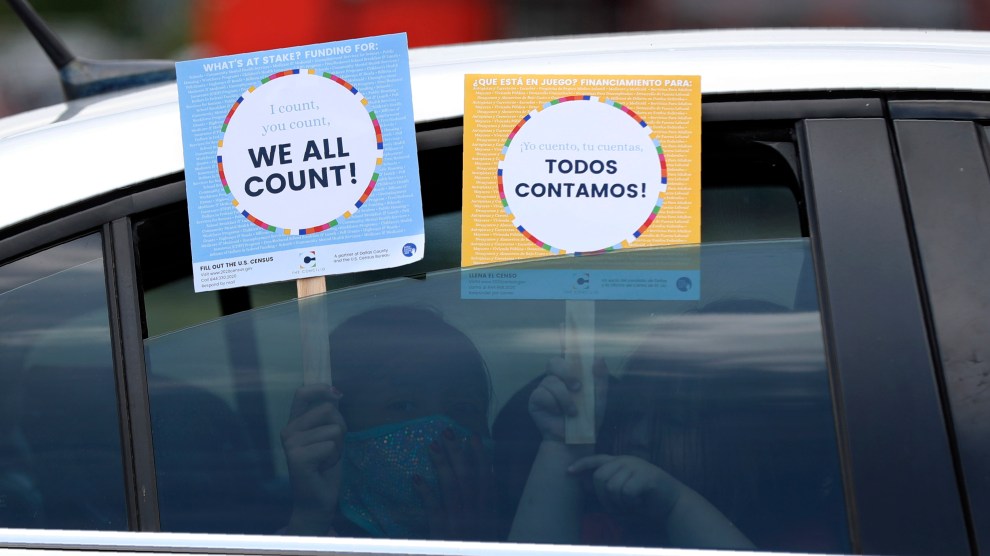 Children hold signs through a car window at a census outreach event in Dallas, Texas.Tony Gutierrez/AP

When the coronavirus pandemic struck earlier this year, Martha Sanchez and her team at La Union del Pueblo Entero realized that going door-to-door was no longer an option. So they came up with a new, safer, way to spread the word about the census in the colonias of Hidalgo County, Texas,

“We get in the car and we use a megaphone,” Sanchez says. “Sometimes it’s a recorded message. Other times we just scream into the megaphone and invite people to come and get counted.”

“Washington has a bigger megaphone than us.”

The LUPE team directs residents to parking lots loaned out by local shops and markets, where they’ve set up tables with laptops so people can complete their census forms online. “We tell them, ‘Come to the table, we’re offering you a chance to get counted and you can maybe even win something,” says Sanchez, adding that they often conduct giveaways to entice people to participate.

The colonias—unincorporated rural neighborhoods comprised mostly of Spanish-speaking families of Mexican descent—are “where the poorest and most disenfranchised people live,” Sanchez says. “So we’re committed to service this community.”

LUPE’s campaign typically attracts about 100 participants in a day. That’s an impressive figure, but Sanchez worries that the Trump administration’s efforts to impose a last-minute deadline change will reduce the number of residents who get counted—depriving the already impoverished region of vital federal funds and reducing its representation in Congress.

The US Census Bureau had originally extended the deadline for households to fill out the all-important questionnaire through the end of October, to accommodate operational changes due to the pandemic. But, after a series of Trump administration appointees joined the agency, it announced that the deadline would be pushed up to September 30. A federal court temporarily halted the change and will decide as early as this week whether to allow the bureau to cease its outreach efforts at the end of the month. Either way, with Hidalgo County’s self-response rates running 13.3 percentage points below the national average, according to the City University of New York’s Hard to Count map, community activists are racing against the clock to get as many residents counted as possible.

“We still have a lot of people that need to be counted. They’re in rural isolated areas, so it’s not easy,” Sanchez says. “We wish we had had until October 31 because now that the time has shortened, it’s much more difficult and much more challenging.”

The pandemic isn’t the only hurdle. Many in the area are deeply suspicious of the federal government, thanks in part to President Trump’s aggressive anti-immigrant and anti-Latino rhetoric. Trump’s effort last year to add a citizenship question to the census spread even more fear, deterring people from participating. The Supreme Court ultimately blocked the citizenship question, but “the damage is done,” Sanchez says. “This is an immigrant community with mixed status families who have people born on either side of the river, so we feel very offended and scared.”

The battle over the citizenship question is “still in the public imagination,” adds Christina Patiño Houle, who, as the network weaver for the Rio Grande Valley Equal Voice Network, works with partner organizations like the ACLU and LUPE to expand voting rights and increase census participation in the area. Trump’s more recent attempt to exclude the undocumented population from congressional reapportionment based on the census results—a move blocked by a federal appeals court last week—has only amplified the confusion.

“People living in the valley, even those who are documented, have fear of the government,” Patiño Houle says. “People are deported, they’re disappeared, they’re extracted from our community on a daily basis. That is real trauma.”

The population in South Texas along the Rio Grande is growing rapidly. Some of the area’s residents live in small cities, like Laredo and McAllen. Others live in the colonias, where they often lack paved roads, electricity, and drainage infrastructure. With tropical storms flooding the area, and with COVID-19 spreading at nearly double the rate of the rest of the state, residents feel that the government has failed them, says Genesis Sanchez, who works for the National Association of Latino Elected Officials. For many, Sanchez says, participating in the census is not top of mind.

But these problems are also what makes the census so essential. Funding allocated according to the census numbers could be used to improve drainage so the poorest residents aren’t displaced by floods, Patiño Houle explains. It could help establish a public hospital, expand access to secondary health care, and provide lunches for schoolchildren. “You’re literally talking about whether or not kids are going to get fed, whether people will have a roof over their head during a natural disaster,” she says, “and whether or not they will die.”

Counting the population of the Rio Grande Valley was never going to be easy. Responding to the questionnaire online isn’t an option for the many community members who lack wifi. Since the Census Bureau doesn’t mail forms to PO boxes, which many residents of the valley rely on, the agency instead delivers census forms to homes in what’s called the Update/Leave operation. But even then, people might not mail back the forms, or their homes might be missed completely.

Local officials believe that the Census Bureau botched its 2010 operations in the region, overlooking thousands of people who each could have netted $3,000 in federal funding over 10 years, the Texas Tribune reports. About two years ago, as part of the Census Bureau’s Local Update of Census Addresses (LUCA) operation, which helps the federal government learn of residences it may have been unaware of in the past, the bureau worked with municipalities to compare addresses on file to satellite images, says Nestor Lopez, an economic development analyst who has been leading census outreach efforts in Hidalgo County.

“What we found was terrible,” says Lopez. “They had missed close to 20,000 homes in our area. And the devastating part is that they had missed entire communities, where we’re talking about 150, 200 homes—completely missed—that have been there for 20, 25 years. So in theory, these homes were not counted a decade ago, and they weren’t counted two decades ago.”

“They brought in a lot of people that might have been from different areas of Central America, and their Spanish is very different to ours, and it didn’t translate well,” he says. “Ultimately, that was very, very detrimental to us, and it dissuaded people from really wanting to interact with people that you can clearly tell aren’t from our community.”

This year, the Census Bureau has committed to hiring local enumerators and to visiting the residences identified in the LUCA program. But the obstacles to an accurate census count are greater than ever, and the uncertainty over when the count will end only makes things harder. Given the confusion over the citizenship question controversy and many residents’ fear of deportation, Patiño Houle says, activists are focusing on conveying that census responses are confidential—and essential.

For at least the next few weeks, Martha Sanchez and the LUPE team will continue driving around with megaphones and doing “everything we can” to get people counted. “But sadly, Washington has a bigger megaphone than us,” she says. “They penetrate a lot of places that we can’t reach. So it’s not an even playing field.”