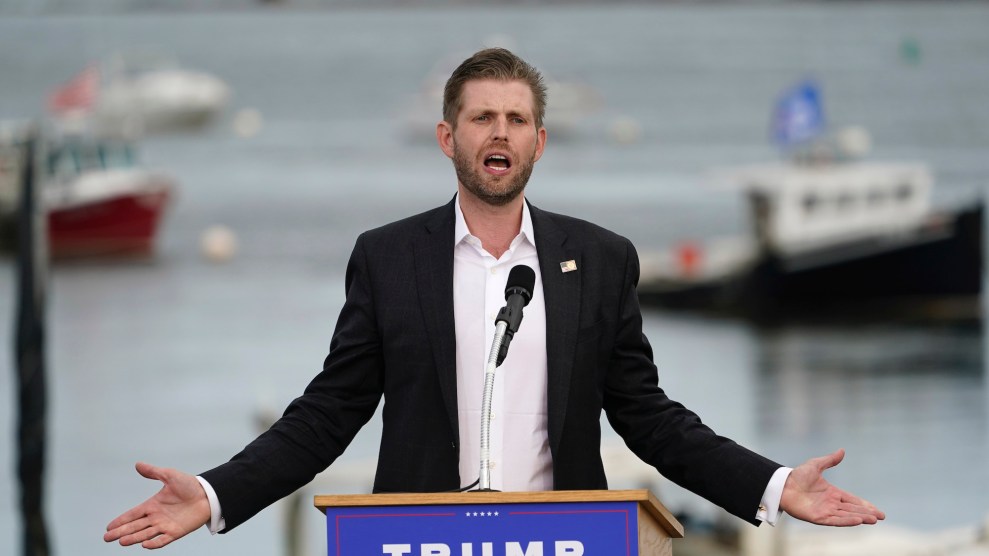 Eric Trump says he will now cooperate with an investigation by New York Attorney General Letitia James into whether the Trump Organization committed tax and banking fraud—but only after the election.

Last month, James filed a motion to compel Eric Trump and the Trump Organization to abide by subpoenas her office has issued for details of the company’s financial history. Specifically, she is trying to determine whether the president and his company misrepresented the Trump Organization’s finances to get better loans and tax benefits.

The investigation also focuses on whether Donald Trump paid taxes on more than $100 million in forgiven debt. Trump borrowed $120 million from private-equity fund Fortress Investment Group in 2006. In 2012, when the outstanding amount he owed had ballooned to roughly $150 million, he convinced Fortress to settle for $48 million. The rest of the debt was forgiven. Around that time, Trump said at least once publicly that he had purchased a loan from a lender. (When a loan is forgiven, the borrower owes a hefty tax bill, but if he or she buys it, the borrower can defer that tax liability at least temporarily.) Since he ran for president, Trump has listed a mysterious debt on his personal financial disclosure that he claims to owe to himself; it is worth $50 million or more and linked to the Chicago project. Trump has implied this debt was purchased from a lender. Mother Jones reported last year that this loan may be evidence of tax fraud if Trump in fact settled the debt and did not purchase it.

As part of her investigation, James confirmed that Trump did not buy the Fortress loan, and she asked the Trumps to provide documentation showing they paid the taxes on the forgiven portion of the debt. According to last month’s filing by her office, James also is scrutinizing whether Trump overstated the value of his properties to convince banks he was a better credit risk and whether Trump misreported a conservation easement on a large property he owns north of New York City.

James said in her filing that the Trump Organization readily supplied most of the information her office requested and that Eric Trump—who has largely been running the company while his father serves as president—was scheduled to sit for an interview under oath on July 22. However, according to James, Eric Trump abruptly cancelled the interview. When James’ office tried to reschedule, Trump’s attorneys told investigators “we cannot allow the interview to go forward…pursuant to those rights afforded to every individual under the Constitution.”

In a filing made on Thursday afternoon, however, the Trump Organization backtracked, saying Eric Trump would sit for an interview—just not any time soon. The Trump Organization’s attorneys said they didn’t allow the interview to go forward previously because they wanted to make sure James’ office didn’t provide the results of its investigation to other agencies that might be investigating Trump—possibly an allusion to New York City district attorney Cy Vance who is reportedly pursuing his own fraud investigation into Trump.

Although they didn’t get that assurance, the Trump attorneys wrote, they are now happy to make Eric Trump available, but not before November 19, “because of Mr. Trump’s extreme travel schedule and related unavailability between now and the election, and to avoid the use of his deposition attendance for political purposes.”

They added, “It is well known that most, if not all, law enforcement and regulatory agencies studiously avoid certain actions within the 60-day period prior to a major election.”

In a statement provided to Mother Jones, James said it wasn’t up to the Trump Organization to tell investigators when its executives are free to talk. “While we cannot comment on the particular steps we’re taking on specific litigation, we won’t allow any entity or individual to dictate how our investigation will proceed or allow anyone to evade a lawful subpoena. No one is above the law, period,” she said.

In its filing, the Trump Organization claims it has provided investigators with everything they requested regarding the Chicago loan—which the company’s motion confirms was paid off at a substantial discount—but most of the section on the deal was filed under seal and is redacted from the public version.

The case is due in court on September 23 for an initial hearing.