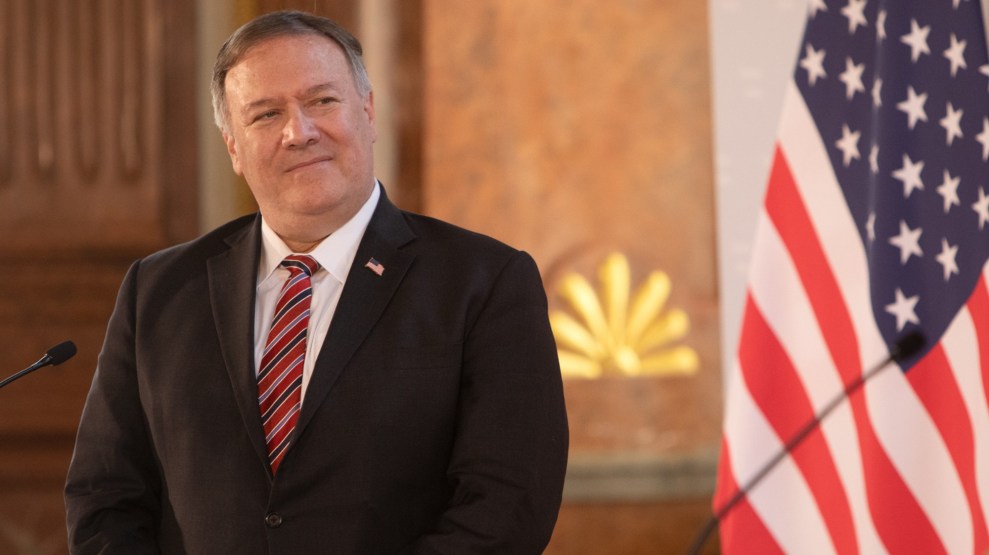 Two months after a controversial State Department commission elevated religious freedom at the expense of LGBTQ equality and reproductive rights, Secretary of State Mike Pompeo is planning to promote its findings at the United Nations, Mother Jones has learned.

During the UN General Assembly, which begins on September 15 in New York, Pompeo is expected to lead an event centered on human rights and, specifically, the report from the Commission on Unalienable Rights, which he formed last year. Meanwhile, on September 16, the commission’s chair and secretary are staging a virtual event with the US ambassador to the UN office in Geneva to present its report to the international community.

Since its formation, the commission has been a Pompeo project through and through, stacked with anti-LGBTQ scholars and headed by his former boss. Its ostensible purpose, which Pompeo outlined in a Wall Street Journal op-ed, was to distinguish between unalienable rights, which “are by nature universal,” and ad hoc rights created by “politicians and bureaucrats.” That argument—and the extremely public, anti-LGBTQ views held by its members—led the human rights advocacy community to disavow the commission and its report, which unsurprisingly turned out to prioritize religious freedom while labeling abortion and same-sex marriage as “divisive social and political controversies.”

The harsh response has not deterred Pompeo in the slightest. Within weeks of the draft report’s publication in July, it had been translated into six languages, including Farsi. (Given the Trump administration’s increasingly hostile stance toward Iran, that was certainly no accident.)

“It just shows this is Pompeo’s pet project and he’s not going to let it go,” Mark Bromley, chair of the Council on Global Equality, told me. In an effort to blunt Pompeo’s broad promotion of the report, Bromley’s group and several other advocacy organizations, including Human Rights Watch, Amnesty International, Equity Forward, and Human Rights First, have been emailing foreign diplomats urging them to reject the report and not support Pompeo’s UN event.

“We are aware that Secretary Pompeo plans to host a high-level meeting on the Commission during the opening week of this year’s UN General Assembly,” reads one email obtained by Mother Jones that was sent to several European Union officials. “We are therefore calling on you not to support this event to make clear to the US government and the public that you reject the Commission’s dangerous view of selective, nationalized human rights.”

Various advocacy group leaders, including Rob Berschinski, senior vice president for policy at Human Rights First, emailed different diplomats as part of the campaign against Pompeo’s event. “There are a number of foreign governments that are really concerned by the commission and its work,” he told me, but acknowledged the difficulty in inspiring any US ally to speak out. “This is sensitive. Anytime democratic governments find themselves needing to criticize the US government on a matter of human rights, it’s by definition a complex topic to negotiate.”

A State Department spokesperson declined to comment for this story, but a different department official confirmed that the event in New York is being planned with Pompeo’s participation. Many world leaders are not traveling in-person for the meeting, but President Trump has said he feels an “obligation” to appear in person. Two sources familiar with the planning of the event said it is not intended to be as direct a promotion of the report as the virtual event on September 16, which includes an interview with Peter Berkowitz, director of the State Department’s Policy Planning Staff, and Commission Chair Mary Ann Glendon, according to an invitation I obtained from Bromley.

Berkowitz, who also served as the commission’s executive secretary, has been among the more prominent State Department officials to publicly back the report, penning a RealClearPolitics op-ed ahead of its release and defending it during a Heritage Foundation virtual panel event last month.

In addition to fears that the commission could be used to undermine LGBTQ equality and reproductive rights, human rights advocates are also concerned about the way dictators might use the report as a way to devalue universal rights. Pompeo’s endorsement of it at the UN does nothing to allay those fears. “Helpfully, we’ve provided the Chinese a translation so they can quote it back to us in defense of their actions in Hong Kong,” Bromley said.