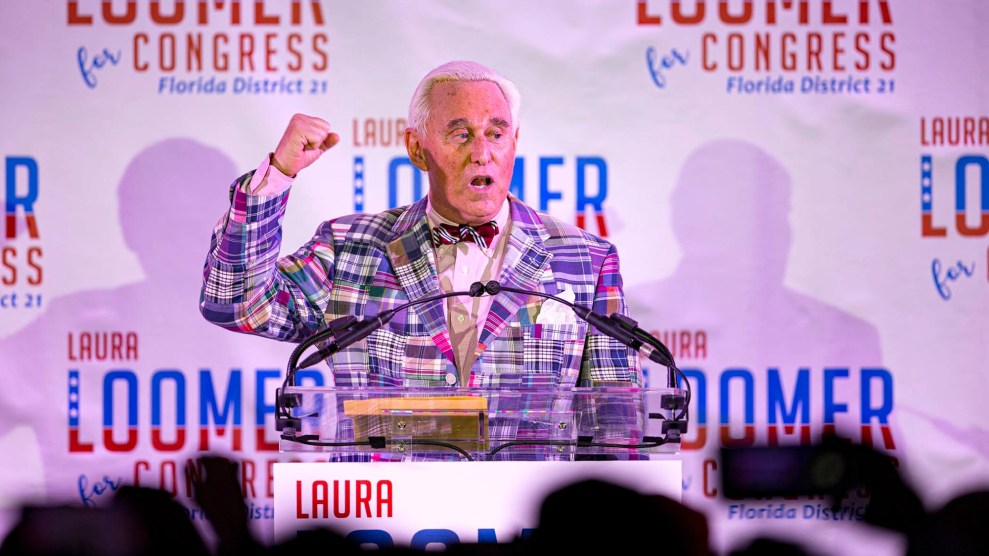 A pro-Trump political conference that last year featured a video depicting a fake Donald Trump violently killing political opponents announced Tuesday that it will return October 8-11 with Roger Stone, whose prison sentence Trump commuted in July, as a headliner. And for the second straight year, the American Priority Conference, or AmpFest, is set to be held at Trump National Doral Miami Golf Club, potentially indoors.

In a press release Tuesday, American Priority did not say if the event will be held inside or outside. Nor did it specify any coronavirus mitigation plans. When Mother Jones called Trump Doral’s reservations line, the person who answered said that events there may be held in the resort’s clubhouse, or outdoors, depending on rules in Miami which currently limits meetings and banquets to 50 percent of the room’s capacity, as the state endures an outbreak that has killed 12,000 or more Floridians.

Roger Stone and American Priority representatives did not respond to questions. But the conference’s organizer, Alex Philips, has strong views on the matter. Philips’ Twitter handle is “Proud mask debator” and he regularly posts attacks on coronavirus mitigation measures.

What is going on?
Why are we still closed down in some states? Why are kids not in school. Why is the media still frightening the public?https://t.co/DV5qjUHXMZ

Speakers scheduled to appear at the conference include Robert F. Kennedy Jr., known for spreading misinformation about vaccinations, and Dr. Simone Gold, who in July appeared in a viral video, later tweeted by Trump, in which she claimed hydroxychloroquine cures Covid-19, among other misleading assertions. (Gold appeared in the video with Dr. Stella Immanuel, who gained notice for claiming elsewhere that sex with demons in dreams causes illness.) The conference bills Gold, who says she met in July with Vice President Mike Pence, as “censored,” in an apparent reference to social media companies removing the video for promoting coronavirus misinformation.

Stone has gone further than Gold in that regard. In an April 13 radio interview with Joe Piscopo on New York City’s AM970, Stone floated a bizarre and false theory that Bill Gates helped to create coronavirus so that he can plant microchips in people’s heads. “He and other globalists are using it for mandatory vaccinations and microchipping people so we know if they’ve been tested,” Stone said, summarizing a theory he described as “open for vigorous debate.”

Last fall, a Washington DC jury convicted Stone of lying to Congress about his contacts with the Trump campaign about WikiLeaks’ plans to release emails stolen from Democrats by Russian hackers. Trump commuted Stone’s sentence in July, in a move that critics note personally benefits Trump.

Former Trump campaign chief Corey Lewandowski, George Papadopoulos, a former Trump campaign aide who pleaded guilty in 2017 to lying to FBI agents about his contacts with a suspected Russian agent, Rep. Matt Gaetz (R-Fla.), and conservative pundit Dinesh D’Souza, who in 2018 received a pardon from Trump for a campaign finance conviction, are also listed as speakers.

Hosting the conference at Trump’s Doral resort outside of Miami is a gift to the president who has banked millions on conservative events that organizers have flocked to have hosted at his properties. Since Trump’s election Doral has struggled financially, with revenues reported to have fallen since he was inaugurated. In his most recent personal financial disclosure, Trump reported revenues at the resort were up, but that didn’t include the costs of running the golf resort. Last fall, Trump attempted to pitch the resort, which he bought in 2012 with the help of a $125 million loan from Deutsche Bank, as a potential venue for this year’s G7 conference, in one of his most overt attempts to use the presidency to profit, before backing off due to bipartisan condemnation.

The American Priority Conference was first held in 2018 in Washington. It moved to Doral last year, headlined by figures including Donald Trump Jr. and former White House Press Secretary Sarah Huckabee Sanders, alongside proponents of QAnon and other conspiracy theories. But it drew wide attention when attendees saw a video that included a clip showing Trump’s head superimposed on the body of a man opening fire inside the “Church of Fake News,” killing figures with the faces of his critics or logos of media organizations superimposed on them. Philips told the New York Times that video was part of a “meme exhibit” submitted by a third party. “American Priority rejects all political violence and aims to promote a healthy dialogue about the preservation of free speech,” Philips said.