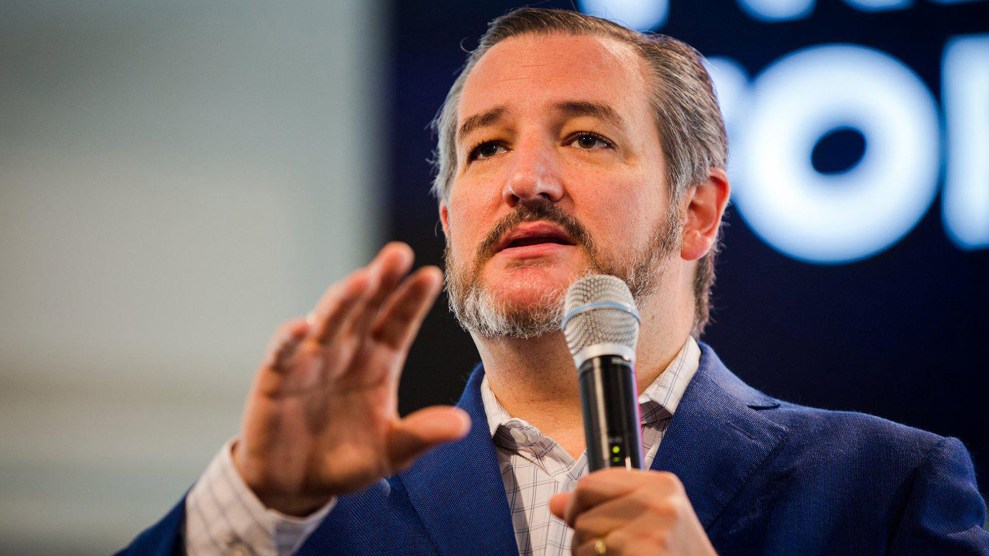 Within a few hours of Justice Ruth Bader Ginsburg’s death, an argument was beginning to crystallize on the right: the Senate needed to fill her vacancy on the Supreme Court, so as to prevent a constitutional crisis if a contested election went to the Supreme Court.

The main driver of this thinking was, naturally, Texas Republican Sen. Ted Cruz, a member of the judiciary committee who Presidential Donald Trump has floated as a potential nominee for the court.

“Democrats and Joe Biden have made clear they intend to challenge this election,” he said in a Friday night interview on Fox News. “They intend to fight the legitimacy of the election. As you know, Hillary Clinton has told Joe Biden, ‘Under no circumstances should you concede, you should challenge this election.’ And we cannot have election day come and go with a four-four court. A four-four court that is equally divided cannot decide anything, and I think we risk a constitutional crisis if we do not have a nine-justice Supreme Court, particularly when there is such a risk of a contested litigation and a contested election.”

Cruz invoked his own experience as part of the Republican legal team in Bush v. Gore, which effectively decided the 2000 election in favor of George W. Bush by ending the Florida recount. “Thirty-seven days the [public] did not know who the president was going to be,” he said, “and if we had a four-four court it could have gone weeks if not months.”

We are one vote away from losing our fundamental constitutional liberties. I believe @realDonaldTrump should nominate a successor next week and the Senate should take up and confirm that successor before Election Day. pic.twitter.com/pS8i860RTa

Ted Cruz with an excellent point. If election is litigated can't risk having just 8 justices and the possibility of a deadlocked court. Could cause a constitutional crisis.

And the Washington Post‘s Robert Costa reported that the idea had some traction in the rest of the Senate Republican caucus.

From my notebook/calls over the past hour: there are discussions within the Senate GOP about voting *before* the election, making the argument that 9 justices are needed in case of an election crisis. But Rs who want that aren't sure if Collins/Murkowski would fight it.

To the extent there might be a constitutional crisis, it’s more likely to be Trump’s doing. The president has spent four years attacking the democratic process, lodging baseless accusations of voter fraud and calling into question the legitimacy of absentee balloting. A top aide at the Department of Health and Human Services recently went on leave after telling supporters to buy ammo. Joe Biden is…not saying things like this.

There’s a little bit of sleight of hand here from Republicans, too, because the argument implies that a presidential election being decided by the Supreme Court—for the second time in two decades, and almost certainly in favor of a Republican candidate who lost the popular vote—could be anything other than a constitutional crisis. Bush v. Gore was a decision so partisan and unusual that the court itself stipulated that it shouldn’t set a precedent; Trump v. Biden would be nothing short of constitutional hell.

Cruz, a former Texas solicitor general who clerked for William Rehnquist, knows perfectly well how the Supreme Court works and doesn’t. Which is to say he knows perfectly well the court can function with eight justices, and that doing so hardly poses some kind of existential threat in an election year. You don’t have to take my word for this, you can take Cruz’s. In 2016, when the death of Justice Antonin Scalia left the chamber one down—Scalia died in February, seven months earlier in the cycle than his good friend Ginsburg—Cruz was adamant the court would be fine. Even as Trump called into question the legitimacy of the election, in the months leading up to the vote, and both parties steeled themselves for a potential contentious aftermath, Cruz said that he’d do everything in his power to prevent a Democratic president from appointing a ninth justice. If necessary, he said he would continue blocking a confirmation vote even if Clinton won.

“There is certainly long historical precedent for a Supreme Court with fewer justices,” he said at the time. “I would note, just recently, that Justice [Stephen] Breyer observed that the vacancy is not impacting the ability of the court to do its job.”

And he was right. An eight-justice court is not that big of a deal. At various points in its history, the court simply had an even number of members (the number of justices is not stipulated by the Constitution). Sometimes justices recuse themselves; sometimes bullheaded senators refuse to vote a nominee and leave the court to work shorthanded for a full year. In the event of a 4-4 decision, there’s not a crisis; the decision of the lower court—the decision that one party appealed to the Supreme Court—simply stands, without setting any further precedent. (Like in Bush v. Gore.) Not that it’s likely to even come to that. With the loss of the court’s liberal lion, the makeup of the current court is tilted heavily toward conservatives, so Cruz’s nightmare scenario of a split court isn’t even all that likely. The most likely outcome of an election decision, as Cruz certainly knows, is a 5-3 decision in his favor.

Filling Ginsburg’s seat ASAP isn’t about averting a constitutional crisis or making sure there’s an odd-number on the court. It’s about locking in conservative control of an entire branch of government for a generation before the other side consolidates enough power to stop them. And that is a perfectly justifiable position for Cruz et al. to take. It’s why some of them got into politics. But they should just say that, rather than insulting us with arguments like this.