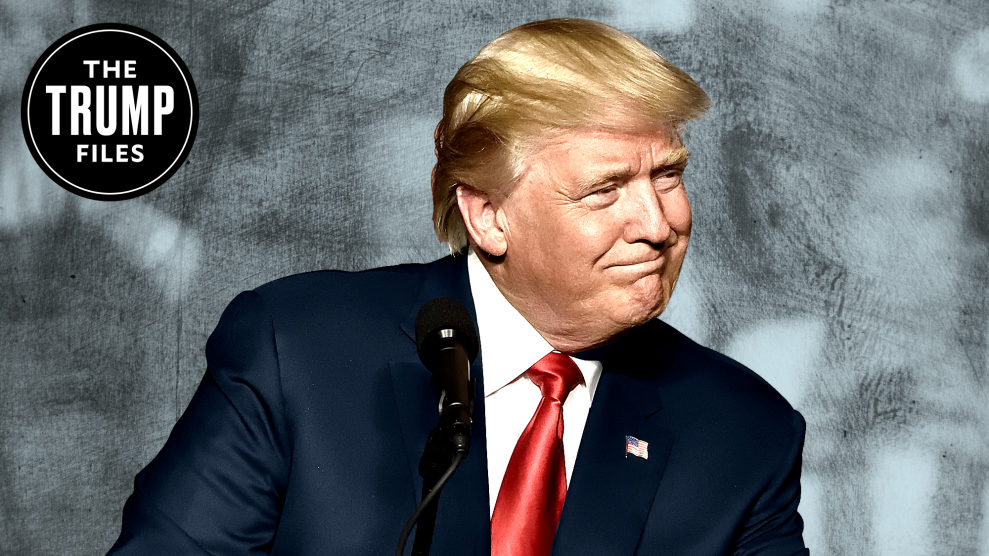 This post was originally published as part of “The Trump Files”—a collection of telling episodes, strange but true stories, and curious scenes from the life of our current President—on July 26, 2016.

Once upon a time, it was pretty simple for a die-hard sports fan to get season tickets for her favorite team. She put her name on the waiting list and forked over the cash for the tickets whenever she got to the top of the list. Now it’s a bit more complicated—and a lot more expensive. Some pro teams, especially football teams, make fans pay for what’s called a Personal Seat License, a multi-thousand-dollar purchase that gives fans the right to buy the actual tickets. Those fees have made season tickets far too pricey for many ordinary fans.

It’s not clear when exactly PSLs were first invented. The best guesses all seem to start around 1986, when Stanford University proposed building a tennis stadium using seat licenses. But two years before that, Donald Trump proposed a “condominium” football stadium for New York City that, seemingly for the first time, would make essentially all fans pay for the rights to their seats.

The proposal came up in late 1984. Trump then owned the New Jersey Generals of the United States Football League, a spring football league that Trump helped run into the ground by forcing a move to a fall schedule and a head-to-head battle with the NFL. He was also part of the New York State Sportsplex Corporation, a state body exploring the possibility of building a brand-new stadium in New York City that could lure the Jets back from New Jersey or convince another team to relocate to New York.

The group endorsed building a 78,000-seat stadium, but Trump and others, including New York Mayor Ed Koch, supported building one with a dome. So Trump told the city and state governments that he’d build an even bigger domed stadium in Queens at no cost to them—other than, as the New York Times reported, the minor donations of “the cleared site, new access roads, a refurbished Willets Point IRT subway station, a construction sales tax exemption, and, as is usual for most other stadiums, property tax forgiveness.” The building itself would be financed using entirely private money, meaning mostly the fans’ money.

Trump proposed making fans pay $4,000 to $5,000 for the right to a seat (more than $9,000 per seat in today’s dollars). This had been done before with luxury boxes and suites, but not on the scale Trump wanted, encompassing an entire stadium that was mostly regular plastic seats. The fees, he said, would “substantially pay for the cost of the stadium.” Seat owners could decline tickets but still share in the profits when the stadium “co-op” sold them to outsiders—and, in a Trumpian move, they could supposedly then claim those profits as capital gains for tax purposes. “Many tax experts believe that for the $5,000 investor, these tax benefits would not be a compelling reason to buy,” the Times dryly noted.

“We do not know all the details,” Deputy Mayor Robert Esnard told reporters when news of Trump’s proposal broke in December 1984. “It’s all kind of sketchy.” The city eventually backed Trump’s idea, but the city never found a team willing to move to Queens, and the stadium was never built.

Seat licenses are now a fixture of stadium building, but their supposed advantages often don’t pan out. Fans can theoretically make lots of money on their PSLs by selling them on to other fans at higher prices. But as teams have jacked up the prices, profits have dropped and some fans have even lost large amounts of money. And the money that licenses raise doesn’t even come close to paying for bloated modern stadiums, which often cost more than $1 billion.

For all of that, fans may want to thank Donald Trump.