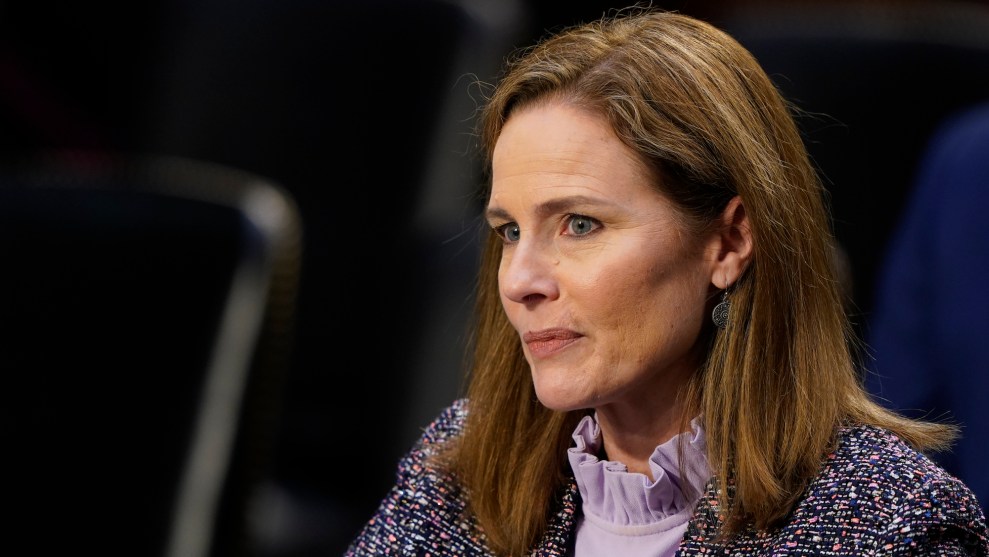 Amy Coney Barrett, by now, should be familiar with the ongoing crisis in American health care. Or at least with its most aggrieved faces: In three days of hearings before the Senate Judiciary Committee on her nomination to the Supreme Court, Barrett has listened as Democrats have compiled nearly magazine-length profiles of Americans who stand to lose their health insurance should Barrett vote to overturn the Affordable Care Act in a case currently pending before the court.

The stories are heartbreaking, ranging from an Illinois family with three kids born with cystic fibrosis to an 11-year-old California girl with a congenital heart defect.

Just how did this coordinated display move the 48-year-old Barrett? That was how Sen. Cory Booker (D-N.J.) focused his line of inquiry on Tuesday. “As an act of empathy, can you understand the fears that are exhibited by the people we put up?” he asked. “All I’m asking is, can you empathize with that? Can you understand that?”

Sen. Booker is pushing Barrett on whether she can empathize. He is asking for her to express empathy. As Sen. Hirono would say, "what the heck?"

The empathy question has some history in Supreme Court confirmation fights, at least when it comes to female nominees. In 2009, when President Barack Obama nominated Justice Sonia Sotomayor as the first Latina to sit on the Supreme Court, he described the things he looked for in a justice. Unlike President Trump, who has specifically said he is choosing judges to overturn abortion decisions and invalidate the Affordable Care Act, Obama said he looked for a rigorous intellect and a nominee’s recognition of the limits of the judicial role. But those two things alone were insufficient, he noted.

Quoting Supreme Court Justice Oliver Wendell Holmes, Obama said: “The life of the law has not been logic, it has been experience; experience being tested by obstacles and barriers, by hardship and misfortune; experience insisting, persisting, and ultimately overcoming those barriers. It is experience that can give a person a common touch and a sense of compassion, an understanding of how the world works and how ordinary people live.” He believed that the “critical ingredient” in deciding the hardest cases was empathy, or “what’s in the judge’s heart.”

Barrett does not have a compelling personal story indicative of the sort of experience that would help her understand how the world works or ordinary people live.

Republicans pounced on what they called Obama’s “empathy test” for judicial nominees, suggesting that Sotomayor wouldn’t follow the law and would instead follow her “wise Latina” heart in making decisions. Sotomayor herself rejected the empathy test during her confirmation hearing. “It’s not the heart that compels conclusions in cases, it’s the law,” she testified. Democrats even spent some time during the hearing trying to prove how mean she was in cases where she’d ruled against sympathetic litigants.

Even so, Sotomayor’s expansive compassion shone through as she told her personal story. “I saw children exploited and abused. I felt the suffering of victims’ families torn apart by a loved one’s needless death,” she said, describing her time as an assistant district attorney in New York. “And I learned the tough job law enforcement has protecting the public safety.”

Empathy is not something a lot of male justices get quizzed on. Women are held to a different standard, required as they are to show that they’re both tough and smart enough to be judges, but also sufficiently empathetic and compassionate while, perhaps, lacking in obvious ambition. It’s hard to say how well Barrett has navigated all of these impossibly conflicting demands so far. But her answers to questioning from the Senate Judiciary Committee suggest she will fit right in with the conservative men currently on the Supreme Court.

Aside from her oft-cited seven children, Barrett does not have a compelling personal story indicative of the sort of struggles that might help her understand how the world works or ordinary people live. Her upbringing with a big, middle-class Catholic family; years spent in a private, all-girls Catholic school in New Orleans; and an adult life almost entirely located in the ivory tower haven’t provided a range of life experience beyond the confines of her leafy South Bend, Indiana, neighborhood. During the hearings, she seemed at times to strain to acknowledge that there are real human beings experiencing the consequences of her decisions. And her delivery before the Senate Judiciary Committee has hinged on robotic (which may be a relief after the hysterics of Justice Brett Kavanaugh two years ago).

Her testimony inadvertently reinforced the fact that she’s spent her entire adult life in a conservative bubble, not a place known for its forgiving human spirit. That bubble hurt her during Tuesday’s hearing when she was trying to impress upon the Senate Judiciary Committee that she had “no agenda” coming to the court, particularly on issues affecting the LGBT community, despite her many years of teaching in a legal fellowship program run by an anti-LGBT group.

“I have never discriminated on the basis of sexual preference and would not discriminate on the basis of sexual preference,” Barrett told a shocked Sen. Mazie Hirono (D-Hawaii), who promptly dressed her down for using the outdated term. “Sexual preference,” Hirono explained, is “used by anti-LGBTQ activists to suggest that sexual orientation is a choice.” Barrett apologized. “I certainly didn’t mean and would never mean to use a term that would cause any offense in the LGBTQ community,” she said. But the language was telling: What Gen-X university professor in this day and age still talks like that?

During three days of hearings, when Barrett moved outside the narrow range of discussion of originalism, textualism, or her late mentor, Justice Antonin Scalia, she has stuck almost exclusively to the familiar and safe confines of her own family. She has talked about her children’s piano lessons, but she has rarely displayed evidence that her viewpoint extends much beyond her immunity pod.

In response to questioning from Booker about the Obamacare patients, she said, “I can certainly empathize with people who are struggling. I can empathize with people who lack health care.” As proof, she referenced a trip to bring her now 17-year-old daughter home from an orphanage in Haiti, where she was struck by the fact that the Haitians lacked basic things like antibiotics. “It just made me appreciate the fact that we had access to health care,” Barrett said. “So I can certainly empathize with all of that.”

She described at one point crying with her Haitian-American daughter after watching the video of the police killing of George Floyd. “As you might imagine, given that I have two Black children, that was very, very personal for my family,” she told Sen. Dick Durbin (D-Ill.) “My children to this point in their lives had the benefit of growing up in a cocoon where they have not yet experienced hatred or violence.”

Asked what she thought the police killing said about the country, Barrett responded, “I think it is an entirely uncontroversial and obvious statement, given as we talked about the George Floyd video, that racism persists in our country.” But she refused to elaborate. “Giving broader statements or making broader diagnoses about the problem of racism is kind of beyond what I’m capable of doing as a judge,” she demurred.

During the hearings, Barrett rarely indicated that her gaze extends past the text analyzed by her originalist brain to a broader expanse of the United States in all its diversity. On Wednesday, Hirono asked her about her dissent in a June case in the 7th Circuit, where she indicated that she would have upheld President Trump’s “public charge” rule. That rule would deny permanent resident status to immigrants who access public benefits such as food stamps that they’re legally entitled to.

The 7th Circuit rejected Trump’s rule, and Barrett’s interpretation of it, but Hirono wanted to know whether Barrett ever considered what would happen to people if the court had adopted her position, noting that the rule already had dissuaded even US citizens from applying for public benefits they were legally entitled to out of fear of deportation. “Everyone seem to agree this rule is having a chilling effect nationwide among families with access to health care, nutrition, food, housing, benefits Congress meant to make available,” Hirono said. Barrett claimed to have done “laborious studies” in the case and stood by her dissent.

Democrats aren’t the only senators who have given Barrett a chance to show a spark of compassion for the people whose lives she could be impacting through her decisions. A friendly, Sen. Ben Sasse (R-Neb.), asked, “If you are confirmed, 30 or 40 years from now, and hang up your robes and sit on the front porch in South Bend or wherever, probably with a gaggle of grandkids around you, how will you judge whether or not you had a successful career as a judge and justice?”

In her answer, Barrett never mentioned the people whose lives would have been changed by her elevation to the high court. For her, the people who mattered were the ones from whom she had less than six degrees of separation. “I would judge whether I had a successful career by whether I had always acted with integrity, whether I had always followed the rule of law and resisted the temptation to twist the law in the direction that I wanted to go,” she said. “Whether I had treated my colleagues kindly and with congeniality, and whether I had helped and mentored and had good relationships with my clerks, or any assistants and staff that I had, because both the law and people are important.”