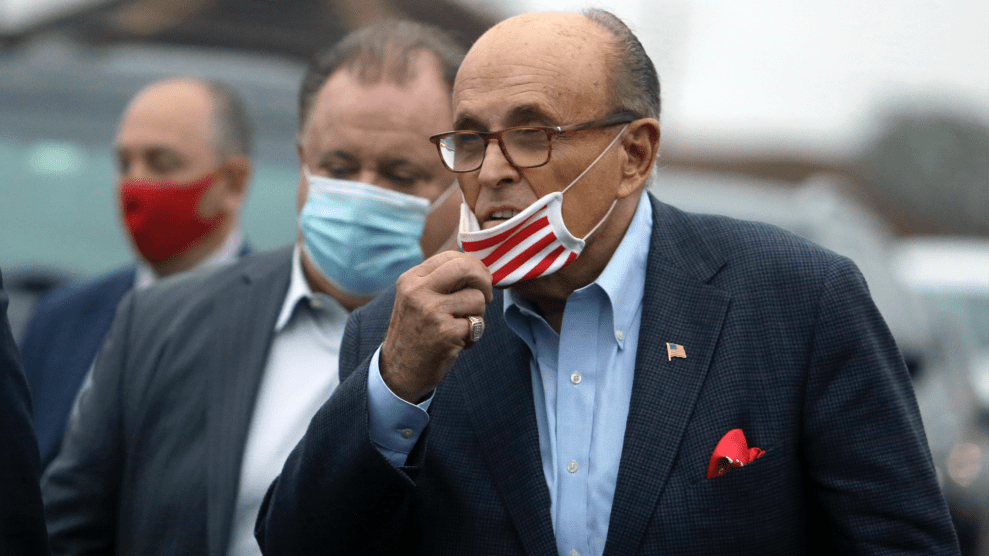 Rudy Giuliani lowers his face mask as he approaches supporters of President Donald Trump on October 12 at a Trump campaign field office in Philadelphia.Jacqueline Larma/AP

What happened to the investigation into leaks by the FBI’s New York field office related to the 2016 Hillary Clinton email probe? It would be good, right about now, to know. Justice Department Inspector General Michael Horowitz has said he’s still investigating those alleged leaks, but his office isn’t saying where the inquiry stands.

The 2016 leaks controversy is especially relevant these days because it seems to involve a familiar figure: Rudy Giuliani.

On October 25, 2016, Giuliani said on Fox News that Trump backers “had a couple of surprises left.” Two days later, he predicted: “We’ve got a couple of things up our sleeve that should turn this thing around.”

The next day, FBI Director James Comey sent his infamous letter to Congress, announcing that the FBI had reopened its probe into Clinton’s emails after discovering new emails on a laptop seized from former Rep. Anthony Weiner, the husband of Clinton aide Huma Abedin. Republicans immediately publicized Comey’s letter.

In an interview with a conservative radio host later that day, Giuliani appeared to suggest he had gotten inside information from within the FBI. He said he had learned from former agents and “a few active agents who obviously don’t want to identify themselves” of “a revolution going on inside the FBI” over Comey’s July 2016 announcement that Clinton would not face charges for using a private server for official emails. Giuliani later backtracked, claiming—not convincingly—that his earlier assertion was based only on speculation by retired agents.

Giuliani, who has since denied receiving FBI leaks, did not respond to a request for comment.

Alleged leaks by FBI agents in 2016 were wildly impactful. According to a June 2018 report by Horowitz, top FBI officials believed the fear of additional leaks from the New York Field Office influenced Comey’s decision to send his letter. Though Comey denied it, FBI general counsel James Baker told the IG’s office that the FBI had been confident that “if we don’t put out a letter, somebody is going to leak it. That definitely was discussed.”

The emails turned out to be innocuous, but the damage was done. Comey’s action is widely considered to have helped secure Donald Trump’s electoral victory.

Giuliani is now trying to recreate the 2016 magic. Earlier this month, he provided to the New York Post material supposedly found on a laptop abandoned by Hunter Biden at a Delaware computer repair shop. Giuliani has since helped the Trump campaign push the issue. Trump brought up dubious allegations about Hunter Biden extensively at Thursday night’s debate. Giuliani also claimed late Wednesday that he has convinced the FBI to “start investigating” the contents of Hunter Biden’s laptop.

I finally got the FBI to start investigating a laptop they have had for over 8 months.

And it turns out to be valid and incriminates #CrookedBiden the #BidenCrimeFamily.

So do we get an apology from Tweeter, Facebook, NBC, CBS, ABC, CNN etc.

And when does the Censorship end

It not at all clear whether the FBI is actually investigating any alleged wrongdoing by Hunter Biden. USA Today reported the bureau is looking into whether an alleged Russian effort to damage Joe Biden’s campaign resulted in the release of Hunter Biden’s correspondence. On Friday, Republicans on the Senate Homeland Security Committee announced that the FBI had requested an interview with a former business associate of Hunter Biden.

Giuliani’s claim that he is manipulating the FBI dovetails with Trump’s overt pressure on FBI Director Christopher Wray and Attorney General Bill Barr to investigate and arrest his political enemies. The effort has alarmed Democrats.

On Thursday, Senate Minority Leader Chuck Schumer (D-N.Y.) and Sen. Ron Wyden (D-Ore.) urged Wray to resist the pressure. “We are deeply concerned about the possibility that in response to these reports the Trump Administration will take actions before Election Day that would seek to damage the Democratic presidential candidate and undermine the rule of law,” the senators wrote.

“As is widely known, Mr. Giuliani for years has partnered with Kremlin-linked individuals in an effort to manufacture dirt on the former Vice President,’ Schumer and Wyden said, citing Giuliani’s association with a Ukrainian legislator who the Treasury Department recently labeled a Russian agent and sanctioned.

Amid this swirl, it would be helpful to know what’s going on with the Justice Department inspector general’s investigation into the alleged 2016 leaks. Horowitz’s 2018 report said that his office was looking into leaks from the FBI’s New York Field Office and that it had “profound concerns about the volume and extent of unauthorized media contacts by FBI personnel that we have uncovered during our review.”

Horowitz told the Senate Judiciary Committee in December 2019 that his office was “very concerned about” possible leaks from the FBI field office. Horowitz said his office was still “investigating those contacts.” Ten months later, the office has said no more about the probe. Asked where that investigation stands, Stephanie Logan, a spokesperson for Horowitz’s office, declined to comment.