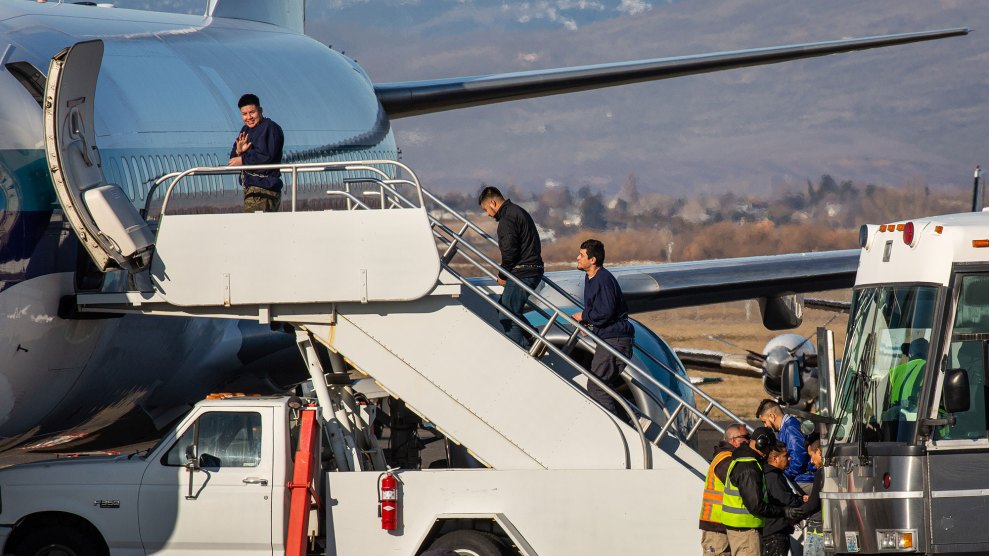 An Immigration and Customs Enforcement (ICE) detainee waves to activists while boarding a flight in Yakima, Washington.David Ryder/Getty Images

Immigration and Customs Enforcement just announced its agents can begin fast-track deportations of certain immigrants who can’t prove they’ve been in the United States for a certain amount of time—all without having to take their cases in front of an immigration judge.

The policy change announced Wednesday would give ICE agents a new tool to quickly deport people from all over the United States. Previously, expedited deportations have been limited to people who were apprehended within 100 miles of the border and who had only been in the country for up to two weeks. Now, ICE agents will have the final word on deciding if a person they come into contact with, anywhere in the country, is undocumented and has been present in the United States for less than two years. If the ICE agent doesn’t see “satisfactory” proof of that, the person would be put into a fast-tracked deportation proceeding, skipping immigration court.

ICE framed the change as a necessary move against “dangerous criminals.” “Our ability to implement this important statutory tool will further enable us to protect our communities and preserve the integrity of our nation’s congressionally mandated immigration laws,” said Tony Pham, senior official performing the duties of ICE director.

While the policy targets undocumented immigrants, it could end up affecting people with visas or temporary status in the United States who can’t show enough documentation to the ICE agent, or even US citizens.

"Expedited removal" i.e. snatch-&-deport is starting, and I just… really can't emphasize enough how scary this is.

There are literally millions of people in the US who are in dramatically greater danger of tragic, irreparable harm from state violence than they were a week ago. https://t.co/TJXPX64DfY

BuzzFeed News reported on plans to implement this policy last year, though it was blocked by a federal judge after it was first announced. Then, in June, the US Court of Appeals for the District of Columbia Circuit gave ICE the green light to begin implementing the policy.

In the lead up to Election Day, the Department of Homeland Security has been ramping up enforcement efforts, as with Wednesday’s policy change and planned raids on sanctuary cities, and pushing misleading and racist stories of “bad immigrants.” Last month, for instance, ICE posted “wanted” billboards in Pennsylvania showing the faces of undocumented immigrants who had been arrested by local police, released, but not turned over to ICE—a result, the signs suggested, of local sanctuary policies. Pennsylvania, of course, is a key swing state; it’s almost certainly not a coincidence.