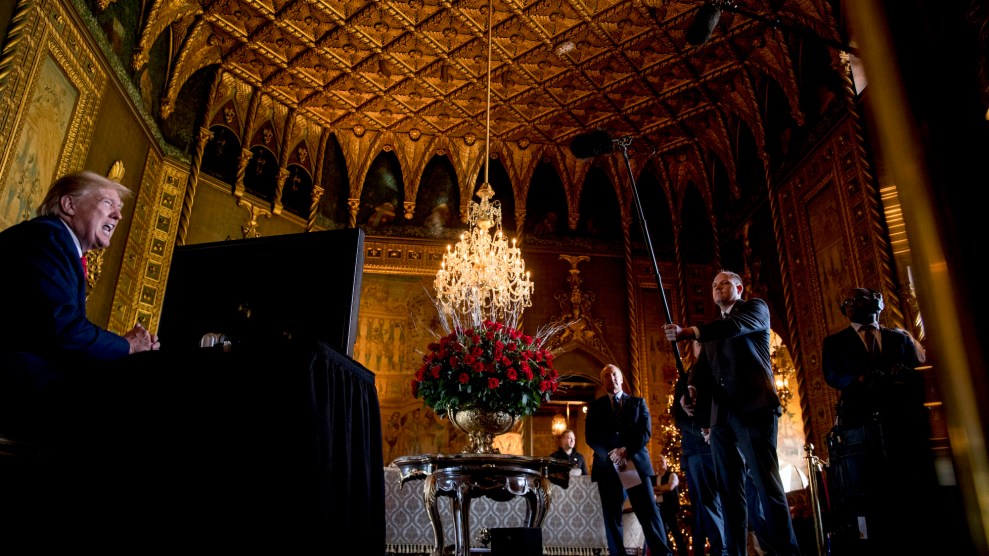 Like any president, Donald Trump travels with an enormous entourage that needs to eat, drink, and sleep somewhere. But unlike any other president before, when Trump travels away from the White House for any extended period of time, it is almost always to one of his own resorts. Not only does this cost taxpayers a small fortune—much of that money goes right into Trump’s pocket. And, as Trump has become the center of gravity for today’s Republican Party, millions of dollars more has flowed into his pockets from political supporters who patronize his establishments.

According to a new report from the Washington Post, with his first term not even over, Trump has used his role as US president to direct at least $8.1 million in revenue to his personal businesses—with taxpayers footing the bill for some and political allies forking over the rest. That makes the US government, which has dropped at least $2.5 million at Trump properties since 2017, one of the president’s largest customers. Overall, earnings that can be directly tied to Trump’s tenure in public office dwarf what he earns in annual revenue at many of his individual properties. From the Post:

But documents show that visits by Trump, his family and his supporters have turned the government and the Republican Party into regular customers for the family business.

According to the Post, Trump’s penchant for hosting foreign leaders at his properties, and in particular at his Florida resort Mar-a-Lago, has been a financial boon. When Trump met with Japanese Prime Minister Shinzo Abe at Mar-a-Lago early in 2017, the president’s resort charged taxpayers for rooms for staff—including Secret Service agents and aides like Steve Bannon—as well as for food and drink. At least $6,000 in taxpayer funds were spent on roses alone. Nothing, according to the Post, was too small for Trump to bill to taxpayers—including $3 for water.

Elsewhere, the Secret Service has been forced to pay $17,000 per month every summer to rent a cottage at the president’s New Jersey golf course—whether he visits or not, just to make sure the agency has a presence if he decides to show up.

The enormous caveat on the Post’s story is that this is far from a comprehensive total—the administration has fought the newspaper and watchdog groups in court to prevent more complete records from being released.