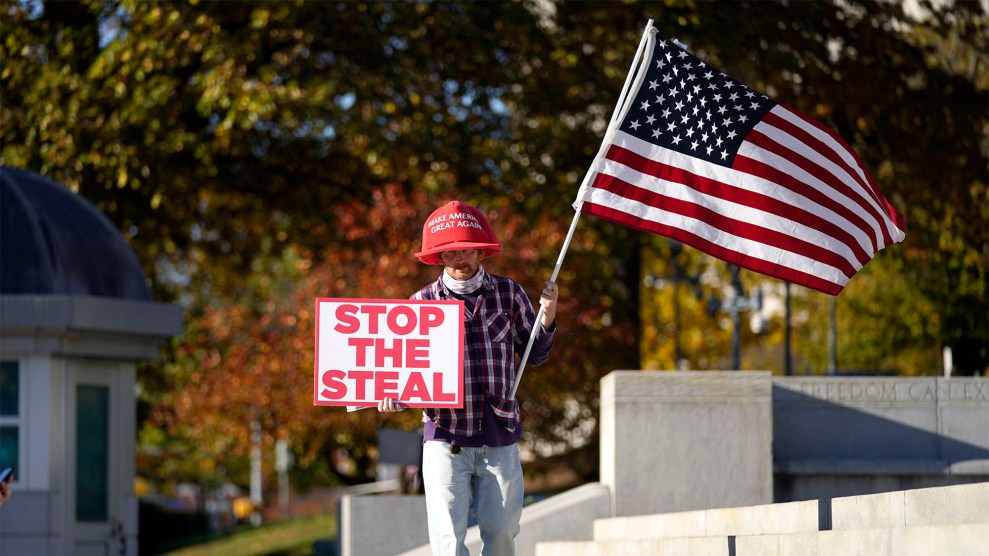 A pro-Trump demonstrator outside the Pennsylvania State Capitol, Nov. 6, 2020, in Harrisburg, Pa.Julio Cortez/AP

Top Republicans doubled down Monday on false claims of an illegitimate election, with Mitch McConnell refusing to recognize Joe Biden as the president-elect, Attorney General William Barr authorizing US attorneys to probe “substantial allegations” of voter fraud, and Georgia’s two Republican senators calling on the GOP secretary of state to resign. These efforts are extremely unlikely to succeed in overturning Biden’s sizable election win. But they could help Republicans in the long run—by giving them an excuse to make it harder to vote.

There’s no reason to think any of the Trump campaign’s attempts to change the outcome of the election will work. The campaign has failed to stop the counting of votes in the five states—Arizona, Nevada, Georgia, Michigan, and Pennsylvania—where it has filed post-election litigation. Biden leads by 255,000 votes in these states. His 12,500-vote lead in the closest state, Georgia, is 23 times greater than George W. Bush’s margin of victory in Florida in 2000. A recount almost certainly won’t shift thousands of votes, nor are courts likely to throw out thousands of votes in multiple states where Biden leads.

But the frenzied attempt by Republicans to undermine the legitimacy of Biden’s victory could still have a big impact by laying the groundwork for the GOP to pass new voter suppression measures at the state level, targeting the voting methods that propelled Biden to victory.

These state Republican officials are getting backup from top national Republicans, including Senate Judiciary Chairman Lindsey Graham, who said he wants to his committee to investigate mail voting. “If we don’t do something about voting by mail, we’re going to lose the ability to elect a Republican in this country,” he said on Fox News Monday night.

It’s very easy to imagine state-level Republicans introducing legislation in early 2021 to cut back on mail voting or early voting, which helped lead to record turnout in 2020. Republican attorneys general have intervened in litigation to back the Trump campaign’s efforts to block mail ballots that legally arrived after Election Day from being counted in Pennsylvania, claiming that the authority of the state legislature, which refused to give voters more time to send their ballots back, should supersede the judgements of state courts that did allot this extra time—an argument that could give GOP-controlled state legislatures even more sway over voting laws in 2021.

The same thing happened after Barack Obama’s election in 2008. Republicans seized on minor errors by the community group ACORN as evidence of massive fraud. John McCain stated in a presidential debate that ACORN was “on the verge of maybe perpetrating one of the greatest frauds in voter history.” There was no evidence of this, but when Republicans took control of many state legislative chambers after the 2010 election, half the states in the country passed new laws making it harder to vote.

Republicans are unlikely to win this war. But they’re already plotting how to win the next one.