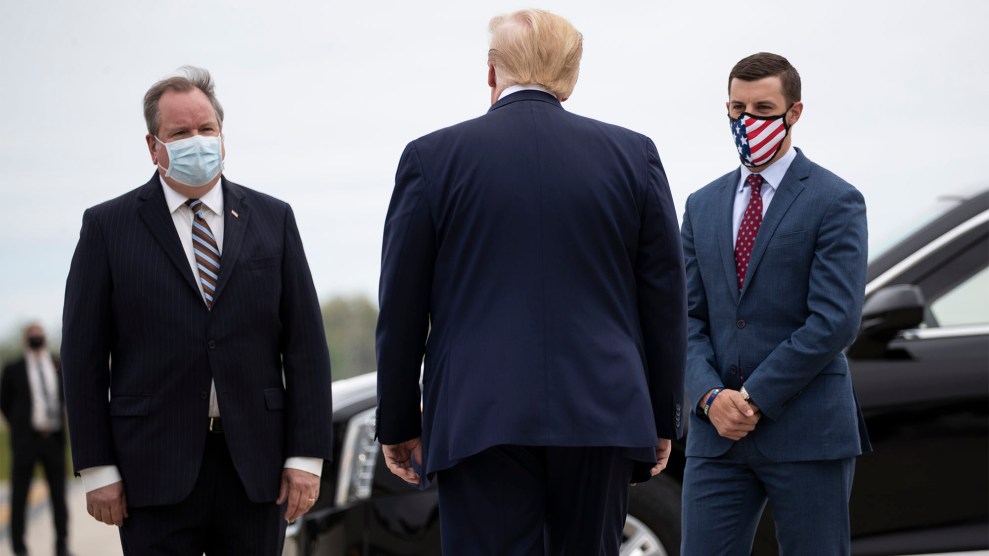 President Donald Trump is greeted by Michigan House Speaker Lee Chatfield, right, at Detroit Metro Airport in Detroit on May 21. Trump summoned Chatfield to the White House for a meeting on Friday.Alex Brandon/AP

After losing nearly every major legal case seeking to throw out ballots cast for Joe Biden in key states, the Trump campaign has pivoted to a new strategy: seeking to persuade GOP-controlled legislatures in states like Michigan and Pennsylvania to nullify Biden’s victory and appoint their own electors for Trump. The Republican leaders of Michigan’s legislature have been summoned to the White House on Friday to discuss this plan.

Such a move would not only be a breathtaking nullification of the will of the voters without parallel in American democracy, it is almost certainly illegal and unconstitutional.

Here’s are the facts:

State legislatures have no authority over how election results are certified:

Electors are chosen based on the candidate who is certified as the winner of the election. State legislatures play no role in this process. In Wisconsin, the chair of the Elections Commission, a Democrat, certifies the election based on county results. In Michigan, certification is done by the counties and the state board of canvassers. In Arizona, Georgia, Nevada, and Pennsylvania, the secretary of state is in charge of certification. The winner should be certified in all of these states in a matter of days. If the results are certified and electors chosen by December 8, six days before the electors formally meet, Congress must accept them.

“The electors are selected by the winner of the popular vote,” said Pennsylvania Senate Majority Leader Jake Corman, a Republican.

State electors must be based on the popular vote:

State law is very clear that electors are chosen based on the popular vote winner of a state. Never in US history has a state legislature appointed electors to a candidate who lost the state’s popular vote.

Many Republican officials have already acknowledged this. “Michigan election law clearly requires that the state’s electors must be those nominated by the party that received the most votes—not the Legislature,” Michigan House Republicans said in a statement Friday.

“The electors are selected by the winner of the popular vote,” Pennsylvania Senate Majority Leader Jake Corman, a Republican, said this week. “That is in our state statute.”

Moreover, it would violate the due process clause of the US Constitution for the legislature to attempt to change the law after the election to give it the power to appoint its own electors. And in the case of Michigan, Pennsylvania, and Wisconsin, those states’ Democratic governors would veto any legislation proposing to do that.

State legislature can only appoint their own electors if voters “failed to make a choice”:

The only situation where state legislatures could conceivably appoint their own electors, according to federal law, is if they believe voters failed to deliver a conclusive result for the election. That almost happened during the 2000 election in Florida, when the Republican-controlled legislature appeared ready to appoint its own electors for George W. Bush because the election had not been settled by the courts and the Electoral College was due to soon meet. The Supreme Court ruling in Bush v. Gore effectively handed the state to Bush on December 12, two days before the electors met, negating such a scenario.

But this is not the 2000 election in Florida. Biden’s margin in every close state is far greater than 537 votes, and Trump has won only two cases out of 33 post-election legal challenges, failing to come anywhere close to altering the results. The voters made a clear choice, and Biden has a comfortable 306-232 majority in the Electoral College. Overturning it would require GOP state legislatures in three states to nullify the will of their voters, which is almost unthinkable.

The prospect for gridlock is greatest in Michigan, since the state canvassing board is deadlocked between two Democrats and two Republicans, and at least one GOP member has already signified he may vote to reject certification. (Republicans on the Wayne County canvassing board initially rejected certification, then backtracked and certified the results, then sought to withdraw their certification after speaking to Trump.) That would be unprecedented, given that Biden won the state by 154,000 votes, but also legally dubious, since the state board is supposed to be a “purely ministerial” body according to state law that simply validates the results from the counties.

“If the state board deadlocks, that would mean two of the canvassers would not be doing their legal duty, because the law doesn’t give them any discretion at this point,” says Samuel Bagenstos, a professor of law at the University of Michigan and the former deputy attorney general for civil rights in the Justice Department in the Obama administration. “All of the returns are in, and their job is just to count those returns and certify the election.”

Under such a scenario, Michigan’s Democratic governor, Gretchen Whitmer, has the authority to replace the dissenting Republicans. More likely, Democrats would go to court to seek a swift order forcing the board to certify the election. There are many precedents for this. In 2018, for example, the board deadlocked on whether to accept language for a ballot initiative proposing an independent redistricting commission, and within six days the Michigan Supreme Court ordered the state to approve the language.

“When canvassers have refused to do their duty in the past, they’ve been taken to state courts, and the courts have issued mandamus orders against them requiring them to do their duty,” says Bagenstos.

A deadlock by the canvassing board would certainly lead to chaos and uncertainty, but legal experts in Michigan believe the courts would act quickly to certify the results before the December 14 deadline to appoint electors, so the state legislature would not have a chance to act.

Governors have the authority to override state legislators:

It’s possible the GOP state legislatures will still seek to nominate their own slate of electors in defiance of state and federal law and leave it to Congress to sort out. Around the same time, the Democratic governors of Michigan, Pennsylvania, and Wisconsin would nominate their own electors based on the official results of their state. Under such a scenario, the governors should prevail. “If the Senate & House split over which of two competing slates of electors to count from a state, the slate of electors certified by that state’s governor prevails,” Georgetown University law professor Joshua Geltzer explained in a tweet Friday, citing the Electoral Count Act, which has a “gubernatorial tie-breaker.”

Of course, the fact that we’re even discussing this nightmare scenario in light of Biden’s clear victory is evidence of how far Republicans will go to undermine the democratic process. Just because it won’t succeed doesn’t make it any less corrosive to democracy. On Friday, Bauer neatly summed up Trump’s post-election maneuverings: “It’s outrageous, but it’s also pathetic.”