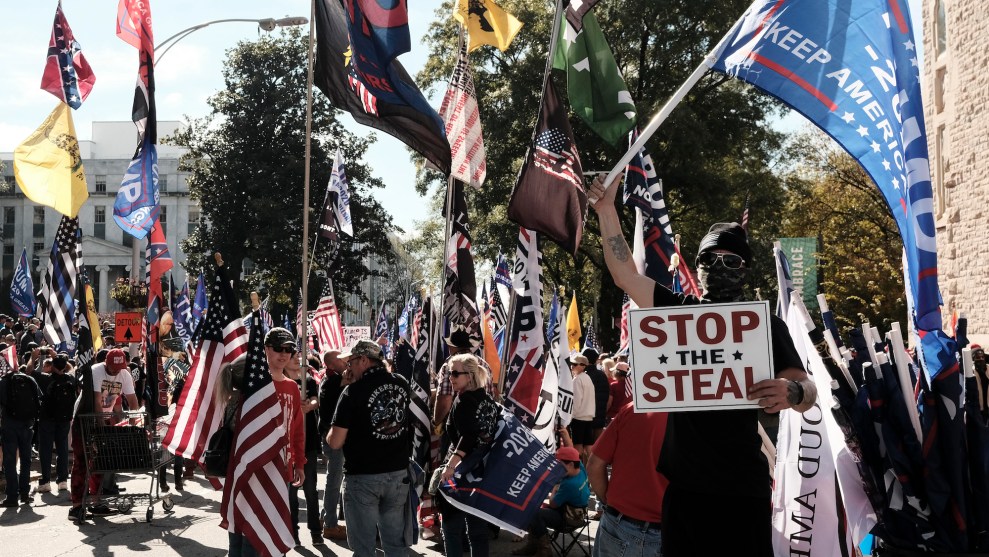 A demonstrator holds a sign that reads STOP THE STEAL outside of the Georgia State Capitol building in Atlanta on November 21.John Arthur Brown/ZUMA Wire

The chair of the Republican National Committee was in Georgia today trying to rally support for Kelly Loeffler and David Perdue, the GOP candidates in the state’s January 5 Senate runoff election. If today’s event is any indication, the effort isn’t going too well, thanks in large part to the Trump campaign’s efforts to delegitimize the election in a state he lost to President-elect Joe Biden by about 12,000 votes.

At a meet-and-greet at the Cobb County Republican Party headquarters in Marietta, attendees peppered party chair Ronna McDaniel with questions about election fraud and pointless recounts going on in Wisconsin. One person demanded to know why the RNC wasn’t investigating accusations about voting machines that supposedly changed votes or counted votes that weren’t there. When McDaniel said that “the evidence wasn’t there” for voting irregularities, the crowd got surly, according to CNN correspondent Ryan Nobles, shouting things like “Kemp is a crook!” Brian Kemp is the Republican governor of Georgia and big-time Trump supporter.

“Why should we vote in this election when we know it’s already decided?” one person demanded to know. McDaniel had a hard time persuading the crowd that in fact the election had not been decided. She asked the attendees to move on from the alleged voter fraud issues and focus on the Senate races. “We’ve gotta focus on January 5 right now,” McDaniel said, according to CNN correspondent DJ Judd. “We can focus on those other things later.”

Here is video from one of the exchanges. A supporter asks why the RNC is not looking into the allegations with the voting machines. McDaniel stated flatly there is no evidence of that. Then someone asks why they should vote in this election when it’s “already decided”. pic.twitter.com/gzDXB7OfEK

The Georgia meet-and-greet is just the latest sign of how much trouble the GOP is having convincing its own voters that the election in the state is legitimate and that they should vote for the two Republican Senate candidates. McDaniel is up against people like prominent attorney L. Lin Wood, who has filed a lawsuit to try to overturn the presidential elections results in Georgia. On November 21, he told his 649,000 Twitter followers that Republican voters should withhold their votes for Loeffler and Perdue until they’ve shown more loyalty to Trump by taking stronger action against alleged voter fraud in the state.

Politicians love votes & money (not necessarily in that order).

Want to get @SenLoeffler & @sendavidperdue out of their basements to demand that action must be taken to fix steal of the 11/3 GA election?

Threaten to withhold your votes & money.

Demand that they represent you.