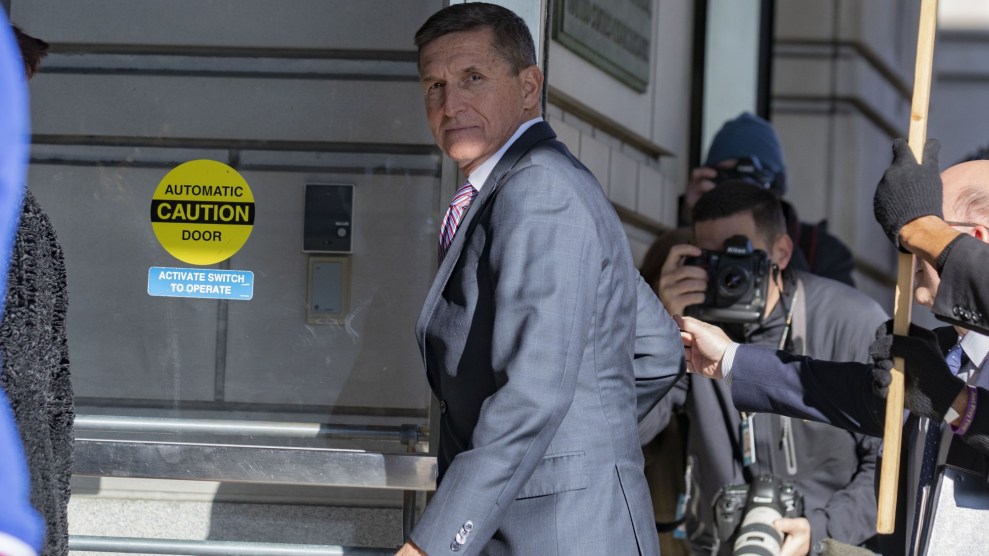 On November 22, 2017, John Dowd, then one of President Donald Trump’s lawyers, left a voicemail for Robert Kelner, who was representing Michael Flynn, Trump’s former national security adviser. Trump had fired Flynn for lying about his conversations with the Russian ambassador in late 2016, and Dowd suspected, correctly, that Flynn, who was under investigation by Special Counsel Robert Mueller, was about to cut a deal with Mueller.

Dowd asked for a “heads up,” if Flynn was giving Mueller information “that implicates the President.” Apparently referring to the possibility that Flynn would cooperate without giving prosecutors damning information about Trump, Dowd also said, “remember what we’ve always said about the President and his feeling toward Flynn, and all that still remains.”

That sounded like a suggestion that Trump would pardon Flynn if he didn’t flip on Trump. In his April 2019 final report, Mueller cited the voicemail in a section analyzing whether Trump obstructed justice by dangling pardons to former aides being investigated by Mueller.

Dowd denies that he was hinting at a presidential pardon for Flynn. “It’s nonsense,” he said when reached by phone Wednesday, after the news broke that Trump was pardoning Flynn. “It’s not true. It’s a fucking lie.” Then he hung up.

Flynn did cooperate without implicating Trump. Flynn told investigators that Trump was not aware of his contacts with Russian Ambassador Sergey Kislyak during the transition. And on Wednesday, Trump gave Flynn that pardon.

It is my Great Honor to announce that General Michael T. Flynn has been granted a Full Pardon. Congratulations to @GenFlynn and his wonderful family, I know you will now have a truly fantastic Thanksgiving!

The pardon is likely to end an ongoing legal fight over Flynn’s guilty plea, in which he admitted he had lied to the FBI about his conversations with Kislyak. In an odd move, Flynn had attempted to withdraw that plea, and his conservative defenders have portrayed him as a victim of a Deep State conspiracy. In June, at the behest of Attorney General Bill Barr, the Justice Department moved to drop charges against Flynn. But Emmet Sullivan, the federal judge overseeing the case, has held up that request to scrutinize its legitimacy. The pardon could put an end to this squabbling. Yet some legal analysts critical of Flynn argued Wednesday that Sullivan could hold a hearing on whether the pardon is corrupt and hence illegal.

As part of his plea deal with Mueller, Flynn also admitted to making “materially false statements and omissions” in documents he filed with the Justice Department about his lobbying work. He had stated he was lobbying for a Dutch company, but the true beneficiary of his efforts was the government of Turkey. Flynn had been lobbying for Turkey while he was advising Trump’s presidential campaign in 2016. Trump didn’t say if his pardon covered Flynn’s false statements about his Turkish lobbying.

Flynn has been represented by Sidney Powell, a Texas-based attorney who was abruptly ousted from Trump’s legal team on Sunday after appearing at a press conference with Rudy Giuliani and asserting, without presenting any evidence, that Democrats conspired with international corporations, the CIA, and forces in Cuba, Venezuela “and likely China” to steal the election from Trump. Powell also suggested Republicans in Georgia, which Joe Biden won, were in on this diabolical scheme. That may have been too much even for Trump, who was reportedly unhappy with her performance. But since she became Flynn’s lawyer last year, Powell has used Flynn’s case to try to bolster Trump’s false claims that he and his advisers were improperly spied upon by Obama administration officials. Her faults as Trump’s lawyer were apparently not bad enough to cost her other client his long-awaited pardon.