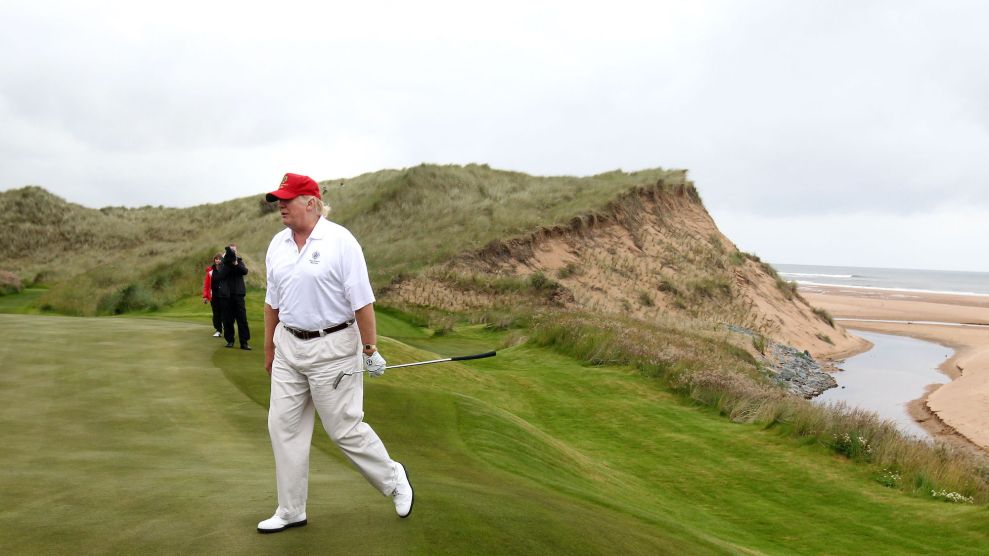 Donald Trump on the third green next to the sea, at the Trump International Golf Links golf course near Aberdeen.Andrew Milligan/PA Wire URN:18214410

The New York Times series based on Donald Trump’s tax returns has revealed a lot about the president’s finances, but so far it has yet to illuminate one of the biggest mysteries of Trump’s business empire: his Scottish golf courses.

The clubs—one at Turnberry, located outside Glasgow, and one in Aberdeenshire, situated on a remote stretch of coastline along the North Sea—have been a main focus of the Trump Organization over the past decade. Trump has poured more money into these properties than any other part of his business. Yet neither club has ever turned a profit. In fact, together they have lost as much as $6.2 million annually over the past 14 years. Trump has other failed investments, but he rarely sticks with a losing venture for so long.

That’s not the only strange thing. Instead of putting money into the business, in exchange for equity, the way an investment usually works, Trump has been lending himself the cash needed to develop the properties and keep them afloat. And he has dramatically overvalued the courses—and not just in his typical braggadocios way, but in detailed corporate filings made annually in the UK.

To be sure, Trump is known for employing aggressive tax avoidance strategies. In October 2018, the New York Times reported that he and his siblings had engaged in tax fraud in connection with their father’s estate. But tax and financial experts Mother Jones consulted about his Scottish ventures were puzzled by his business methods, which they said did not have obvious tax or financial advantages. Perhaps, they said, Trump is just bad at doing business.

However, some critics have speculated about a more nefarious explanation for Trump’s anomalous business dealings related to the Scottish golf courses: money laundering. To that end, members of Scottish parliament have been pushing to probe Trump’s golf clubs using a statute typically aimed at kleptocrats.

From the beginning, Trump’s Scottish ventures were a departure from his usual M.O. He has traditionally financed his development projects with borrowed money—that’s why he has often referred to himself as “the king of debt.” But starting in 2006, when he began developing his Aberdeenshire property, he deviated from that practice. He financed his Scottish courses out of his own pocket, pouring, by his own estimate, more than $200 million into the clubs. These expenditures came during a nine-year cash spending spree during which Trump dropped some $400 million on various properties in the United States, Scotland, and Ireland.

Moreover, the way he has funneled money into the Scottish courses is downright bizarre. Every dime that he has put into the properties has been lent to the Scottish companies he owns that control the golf courses, by Trump himself or one of his New York-based LLCs.

Tax experts say it’s not unusual for different parts of a business based in different countries to lend to each other. Doing so can create tax advantages since the borrower may be able to write off the interest payments. Yet Trump’s loans (from himself and his LLCs to his Scottish companies) carry no interest and have no due dates, negating the most common tax benefit.

“I don’t see the tax angle to doing that,” says Daniel Shaviro, a professor of tax law at New York University’s law school. “There is a stupidity angle, perhaps, which would fit what we know about him as a businessman more generally.”

Shaviro and several other tax experts speculated that Trump may be attempting to take advantage of a variety of other, more obscure tax-avoidance tactics, but they pointed out that these strategies were, for the most part, not legally advisable, if not outright illegal.

The Trump Organization did not respond to requests for comment.

The experts Mother Jones spoke to were also puzzled by the values Trump has assigned to his Scottish properties. For instance, according to Trump’s most recent corporate filings, he values his Aberdeenshire course at $40.5 million. That’s nearly four times what comparable Scottish clubs are worth. Carnoustie Golf Links, a historic and top-ranked course that hosted the British open as recently as 2018, is valued at $10.4 million. Kings Barns Golf Links, which like Trump’s Aberdeenshire property runs along the North Sea and is owned by an American businessman, is valued at $10.3 million.

Trump has a habit of over- or undervaluing his assets to suit his objective at the moment—inflating his net worth to obtain financing or deflating property values when seeking lower tax assessments—his former lawyer and fixer Michael Cohen told Congress in 2019. Allegations that Trump misrepresented his worth when seeking loans are currently at the center of an investigation into Trump and his company by New York’s attorney general, Letitia James. Documents Cohen provided to Congress show that Trump excluded his Scottish resorts from the forms he submitted to banks asking for loans. That in itself could be interesting to investigators. In court filings, James raised questions about a similar Trump action: He omitted financial data regarding his Chicago projects from financial statements he gave to banks. And she wanted to know why.

The weirdness of the numbers—and the method by which Trump has invested—has raised eyebrows in Scotland. Earlier this year, members of the Scottish parliament began urging their government to pry open Trump’s books and use what’s known as an Unexplained Wealth Order (UWO). As the name suggests, it’s a UK statute that can be used to compel a politically prominent person to explain how he or she pulled off a financial transaction that appears out of line with what’s publicly known about his or her finances. In 2018, this law was used to examine how the wife of a jailed ex–Azerbaijani government official had managed to afford a £16 million shopping spree at Harrods.

Patrick Harvie, a Scottish Member of Parliament and co-leader of the Scottish Green Party, is leading the effort to use a UWO to investigateTrump. “This is not someone who inspires confidence in sound finances and sound business,” he told Mother Jones this summer. “The fact that there are many allegations floating around that the US authorities have investigated, whether it’s in relation to Russia or his political dealings domestically—you don’t have to sniff the air very long to see there’s something that smells.”

Adam Davidson, who covers business for the New Yorker and who has investigated Trump’s finances, has extensively detailed Trump’s odd financial maneuvers in Scotland and why he believes they may be evidence of shady activity.

He cannot have spent all that money on the properties. We have the planning docs. We know how much he spent–it's far less than what he claims.

The money truly disappears. It goes from one pocket to another pocket and then the pocket is opened to reveal nothing is there.

Fueling the suspicions of his critics is the fact that Trump has a history of partnering with people with alleged ties to money laundering. One example is the Agalarovs, the Azeri-Russian family who Trump teamed up with to produce the Miss World pageant in Moscow and with whom he explored developing a Moscow tower. The Senate Intelligence Committee reported this summer that the Agalarovs “have significant ties to Russian organized crime and have been closely affiliated with individuals involved in murder, prostitution, weapons trafficking, kidnapping, extortion, narcotics trafficking, money laundering and other significant criminal enterprises.” The committee also noted that Trump’s partners in the Trump Soho hotel project had connections to money laundering.

In Scotland, Trump has proposed lavish housing developments at both of his clubs. Though his proposed development has thus far been blocked at Turnberry, Trump has received approval to move forward with his plans in Aberdeenshire. Martyn McLaughlin, a reporter with Glasgow’s Scotsman newspaper who has doggedly covered Trump’s Scottish adventures, says he and many locals wonder who would put down six or seven-figures to buy a home on this stretch of the Scottish coast, known for its booming offshore oil industry.

“Quite how they’ll have a viable business scheme out of that, I’m not sure,” he told Mother Jones this summer. “Who pays hundreds of thousands of pounds for a family villa in the northeast of Scotland that’s got the corrosive brand of Trump attached to it?”

McLaughlin said that at an early open house event for prospective buyers—before the COVID-19 pandemic limited travel—the interested parties seemed mostly foreign. “Which raises the question: Who is investing? Who is giving money to the president’s company? It’s the most explicit opportunity to put money into the Trump Organization in return for property.”

The development the Trump Organization has proposed in Aberdeenshire is expected to cost another $200 million, and it’s unclear where Trump will come up with the cash for this. The pandemic has slammed his hospitality empire, especially his Scottish courses, which have been largely destinations for American travelers. Trump’s company also faces loans totaling more than $400 million that it will either have repay or refinance over the next few years.

Whether Trump can pull off this next stage of development for his Scottish resorts or the courses sink further into unprofitability, Trump’s financial future (if he stays in office or not) seems increasingly tied to these properties. Consequently, it remains notable that so much about his Scottish dealings continue to be unexplained and puzzling.