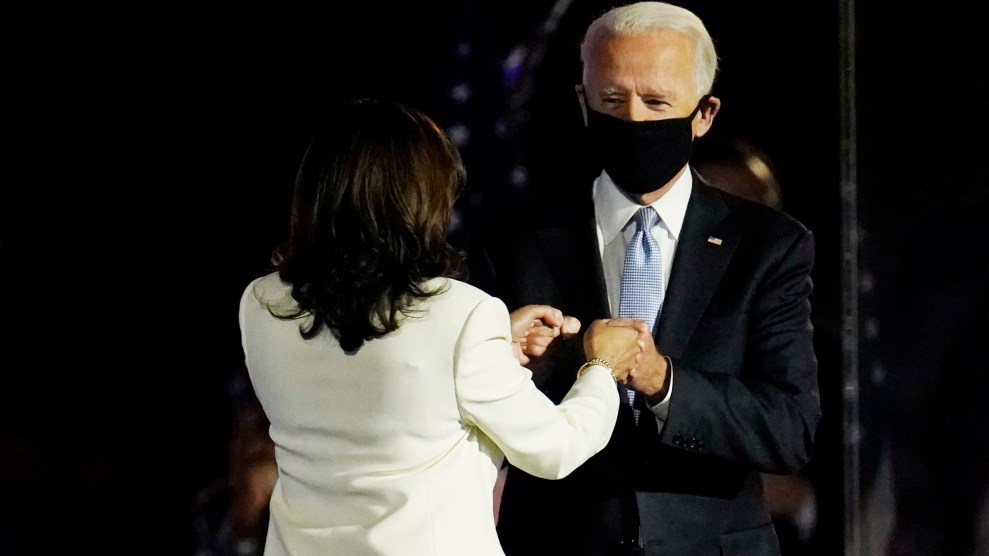 In his first public remarks since the race was called for him Saturday morning, President-elect Joe Biden claimed a mandate to govern—and laid down a marker for the kind of president he intends to be.

Speaking to a large outdoor crowd at a parking lot outside an event center in Wilmington, Delaware—his applause lines sometimes punctuated by car horns from supporters sitting on trucks and SUVs—the former vice president declared, “Americans have called on us to marshal the forces of decency and the forces of fairness.” He promised action on climate, racial justice, jobs, and health care. And he announced that beginning Monday, he would be forming a special task force to develop a plan for COVID-19 for the White House to implement on January 20, 2021.

“That plan will be built on a bedrock of science,” he said. “It will be constructed out of compassion, empathy, and concern. I will spare no effort—or commitment—to turn this pandemic around.”

“I will spare no effort—or commitment—to turn this pandemic around.”

But Biden also spoke directly to the more than 70 million Americans who supported someone else this week, reiterating his desire for the kind of bipartisanship that, for better or for worse, has been a hallmark of his political career.

“For all those of you who voted for President Trump, I understand the disappointment tonight—I’ve lost a few times myself,” he said. “But now, let’s give each other a chance. It’s time to put away the harsh rhetoric, lower the temperature. See each other again.”

“Let this grim era of demonization in America begin to end here and now,” he said later. “Refusal of Democrats and Republicans to cooperate with one another—it’s not some mysterious force beyond our control; it’s a decision.”

Biden was preceded (and briefly joined) onstage by Sen. Kamala Harris (D-Calif.), the vice president–elect, who sought to place her victory in the context of those who came before her—a success forged by generations of struggle for women’s rights and racial equality. After Harris thanked her late mother, Shyamala Gopalan Harris, an immigrant from India, she continued:

I am thinking about her and about the generations of women, Black women, Asian, white, Latina, Native American women, who throughout our nation’s history, have paved the way for this moment tonight, women who fought and sacrificed so much for equality and liberty and justice for all. Including the Black women who are often, too often overlooked but so often proved they are the backbone of our democracy.

All the women who have worked to secure and protect the right to vote for over a century 100 years ago with the 19th Amendment, 55 years ago with the Voting Rights Act and now in 2020 with a new generation of women in our country who cast their ballots and continued the fight for their fundamental right to vote and be heard. Tonight, I reflect on their struggle, their determination and the strength of their vision to see what can be unburdened by what has been. And I stand on their shoulders.

Harris said that her victory, too, would provide a foundation for others.

“Every little girl watching tonight sees that this is a country of possibility,” she said. “And to the children of our country, regardless of your gender, our country has sent you a clear message: dream with ambition, lead with conviction, and see yourself in a way that others may not simply because they have never seen it before. But know that we will applaud you every step of the way.”

The Biden–Harris Era has begun. And it couldn’t be more different from the one that came before it.