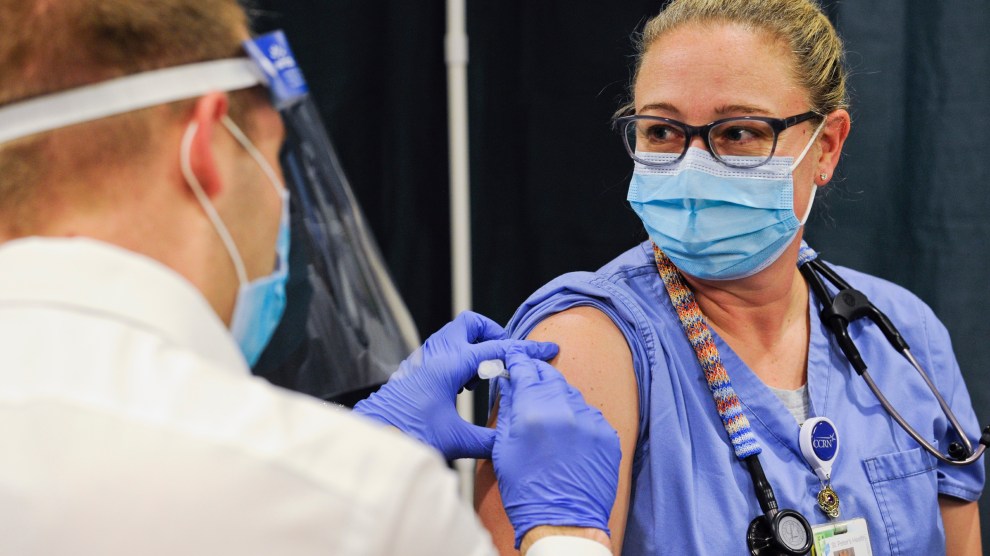 A critical care nurse in Montana receives a dose of the Pfizer COVID-19 vaccine.Thom Bridge/AP

The start of COVID-19 vaccinations for health care workers has sparked hope that the end of the pandemic crisis is within sight, but when it comes to vaccine distribution, this is still the easy part. Local and state health agencies say they will struggle to get hundreds of millions of doses of the vaccines to the general public without a huge amount of additional funding. Even if Congress does manage to pass a compromise relief bill, the amount it provides may not be enough.

The fates of the vaccine and the relief bill, both months in the making, are linked. The $900 billion proposal that Democrats and Republicans on Capitol Hill continue to debate has a number of provisions to mitigate the COVID economic crisis, including additional unemployment benefits and small business support. The latest available version also contains $6 billion in vaccine distribution funding for state and local health departments. But groups that represent state and local health departments say that this funding, while crucial, won’t be sufficient to distribute the vaccine on a massive scale as efficiently and widely as possible.

“We see the $6 billion that’s on the table as an important down payment to scale up staffing, develop and enact communications plans to address vaccine hesitant populations, and enroll more vaccinators,” Jasmine Berry, the communications director at the Association for Immunization Managers, says in an email. “There’s still going to be a need for additional funding for state and local health agencies.”

What’s more, the already months-long delay in getting this funding to state and local health departments may create problems down the line, as the country’s vaccination campaigns expand beyond health care workers and nursing homes.

“Where we’ll really start to see potential delays, or where we are not as successful as we could have been, may be as we move through the phases to the next group, where there’s a much larger population that would need to be served,” says Adriane Casalotti, the chief of government and public affairs at the National Association of County and City Health Officials, which represents local health departments.

Several top Democrats highlighted this point during a press conference this week, turning the stimulus spotlight—which has long focused on economic measures like unemployment and state and local aid—to vaccine distribution and calling for more federal funds to help localities get the vaccine out.

“It’s just not enough logistically to send a box with vaccine in it to a hospital’s loading dock. That’s step one.”

For months, Trump administration officials have insisted that states need little extra funding for vaccine distribution. A White House spokesman told ABC last month that states won’t have many additional expenses, given that the federal government will cover the costs of the doses, while administration of the vaccine will be covered by private insurers, Medicare, and Medicaid. The Department of Health and Human Services has so far designated just $480 million to states for both COVID and flu vaccine planning. In an informational document, HHS wrote, “In considering funding needs, states should recognize that most of the major costs of a vaccine campaign are already being covered.” It cited the fact that the federal government will pay for vaccine doses and has a contract with the pharmaceutical distribution firm McKesson to transport the vaccine.

But that is far from sufficient, says Claire Hannan, executive director of the Association for Immunization Managers. “It’s just not enough logistically to send a box with vaccine in it to a hospital’s loading dock,” she says. “That’s step one.” There are many additional costs that state and local health departments have to take on to make this massive vaccination campaign work at scale, such as recruiting and training staff to deliver the vaccines and coordinating outreach efforts to strengthen trust in the vaccine and combat misinformation.

“They talk about the fact that the vaccine is being provided free of charge, and that providers who give the vaccine can bill for reimbursement of administration fees to insurers, so there’s really no cost [to states],” says Hannan. “It really shows a disconnect between logistics and an actual vaccination campaign.”

In September, Centers for Disease Control director Robert Redfield told a Senate appropriations subcommittee that his agency would need up to $6 billion to deliver and administer the vaccine. Local and state health officials said even that wouldn’t be enough, sending a letter the next month to House and Senate leaders asking for $8.4 billion. That figure includes $3 billion to hire and train vaccination staff for state and local health departments; $1 billion to build additional vaccination sites; $1.2 billion for storage, transportation, equipment, and staff training; and $500 million for outreach efforts and education campaigns to increase trust in the vaccine.

The latter may suffer in particular if Congress doesn’t supply enough funds. “This is all just going to be made much worse if we don’t have any ability to reach out to communities, communicate with them about the benefits and any of the challenges of vaccination, and just build trust,” says Marcus Plescia, chief medical officer of the Association of State and Territorial Health Officials. “My concern is that it may not be an issue of being able to get it administered to people, because we may have a lot of people who are just reluctant to get the vaccine in the first place.”

Casalotti notes that the months-long delay in vaccine distribution funding may have already hurt trust-building efforts. “We’ve seen the confidence in these vaccines plummet,” she says. “So every day that we’re not combating the misinformation that is out there is a day that we really need to be making up for.”

There are also logistical challenges. Even though insurers will cover the cost of administering vaccines, states and local health departments will have to front those costs when vaccinating people and then bill insurers for reimbursement. That’s a problem for localities that are already cash-strapped after months of depressed economic activity and now have to hire vaccinators. “They can’t tell the vaccinators we’re going to pay you when we get reimbursed,” says Hannan. Many public health departments also lack the staffing or funds for the complex billing process itself. When the Association for Immunization Managers polled its members—immunization officials across the country—earlier this year, a quarter said their state’s health department lacked the capacity to bill for vaccine administration fees, according to Hannan. Another 47 percent said they were unsure about the capacity to bill for reimbursement.

There does seem to be broad bipartisan support for vaccine distribution funding, and Republicans and Democrats appear to be nearing a deal that includes $6 billion in funding. But even if the money comes through, it should not be seen as the end of the discussion, says Casalotti. Congress should revisit the funding question in a month or two, she says, to ensure that health departments don’t worry about running out of money in the midst of their vaccine campaigns.

“It makes it harder on the local health department staff to do this work when everything has to be done in crisis mode,” she says. “When you are working full-time and overtime, eight months, nonstop fighting the hardest battle you’ve ever had to as a public health staff person, trying to keep your community healthy and safe, what these delays really mean is that instead of being able to focus on their community, on their neighbors, [health departments] are sometimes focused on the bank account and trying to fight for the resources they need to do the work they know is coming.”