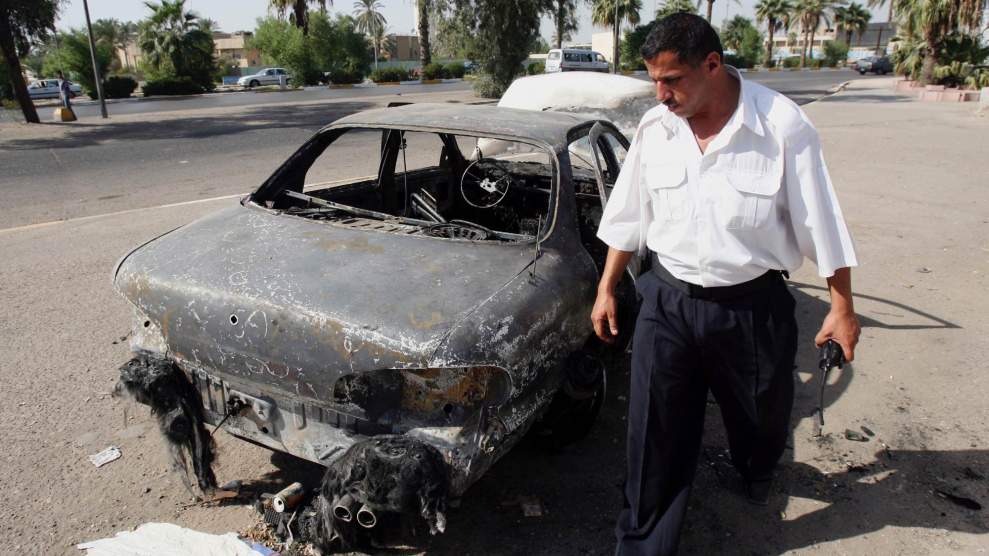 Earlier this week, Fox News host Pete Hegseth asked God to bless President Donald Trump for showing the “courage” to pardon the former Blackwater contractors convicted of killing 14 unarmed Iraqi civilians in 2007. A new account from Thomas O’Connor, one of the FBI agents who investigated the killings, shows what God is being asked to bestow his blessing upon.

The Blackwater guards that Trump pardoned were convicted of opening fire on and killing Iraqi civilians, including children, in the 2007 Nisour Square Massacre in Baghdad.

Today, Fox News' Pete Hegseth: "God bless the president for having the courage … to pardon those men." pic.twitter.com/KWQcua7J3r

As O’Connor explains in an op-ed published by CNN, “I know that these men were undeserving of pardons because I was a member of the FBI Evidence Response Team that traveled to Iraq and investigated the site of these killings.”

The site of the killings was Nisour Square, and they took place after a Blackwater team leader requested permission to leave the protected Green Zone to help bring back a US official being guarded nearby by other contractors. The request was denied, but he and his mercenary colleagues left the Green Zone anyway and took positions in the square in their combat vehicles. From there, O’Connor explains:

Two Iraqi traffic officers stopped the traffic going toward the four armored vehicles. One of the first cars in that stopped traffic was a white KIA occupied by a woman and her son. The woman was a local doctor and the son, who was driving the car, was going to medical school to follow in his mother’s footsteps.

What happened next began the Nisour Square shootings.

A sniper [Slatten] on the Raven 23 team placed his rifle out a porthole of the Bearcat armored vehicle and fired at the driver of the white KIA. The man was struck and killed by the bullet.

After Slatten killed the doctor’s son, his team members opened fire as well:

The gunfire was directed into the white KIA, killing the women seated in the front passenger seat. These rounds were from a rifle and a large turret gun. A grenade was fired from the turret gunners’ rifle mounted launcher. The grenade skipped off the ground under the driver’s door exploding and causing the gas line to rupture and set the car ablaze.

A few cars behind the white Kia, a 9-year-old-boy was killed while sitting in the back seat of a Suzuki SUV:

When the shooting stopped and the Blackwater team began to move, Mohammed exited the driver door and opened a rear passenger door. Ali, who had been slumped against the door, fell into his father’s arms. Ali had been struck with a Blackwater round, which entered the rear driver side door and hit the boy in the head. As his father reached for his 9-year-old son, Ali’s brains fell out onto the street and onto his father’s feet.

These were the stories of just three of the 14 people they were convicted of killing. O’Connor and other FBI investigators found no forensic evidence that the Blackwater guards had been fired upon. Instead, they found evidence of a cover up. The president has now responded by letting them off.

This isn’t the first time Trump has intervened on behalf of people accused or convicted of committing wartime atrocities. Last year, Trump restored the rank of former Navy SEAL Eddie Gallagher after he was acquitted on a murder charge for fatally stabbing a captured teenager. Fellow SEALs who served with Gallagher had called him “freaking evil,” “toxic,” and “ perfectly O.K. with killing anybody that was moving.” In 2019, Trump also pardoned an Army lieutenant convicted of killing two Afghans and an Army major facing murder charges.

Hegseth, an Iraq War veteran, had been pushing for those pardons. He advocated for the Blackwater killers, too. In a statement earlier this week, the White House claimed that pardoning those guards was “broadly supported by the public.” While there’s nothing to suggest that, the first piece of evidence it cited was that Hegseth supported it.

Taken together, the episode pulled together some of Trump’s worst habits into a single package. Trump associated himself with an act of cruelty that his mind sees as strength. The opinion of a Fox News host became the supposed arbiter of what average Americans believed. And Trump had the chance to turn on the TV and hear the network give him God’s blessing for absolving men who his fellow citizens had found guilty of slaughtering children.