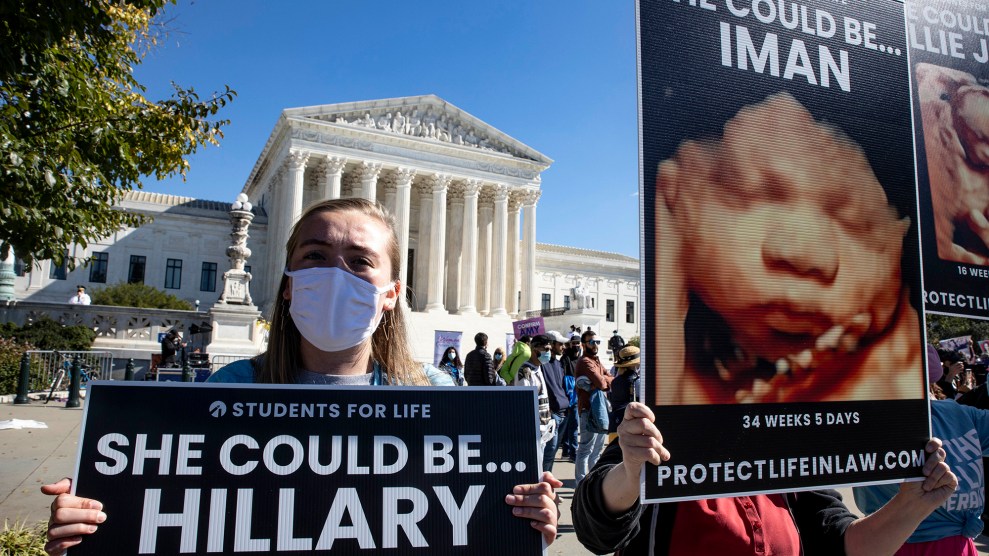 A counter-protest by Students for Life, an anti-abortion group, in front of the Supreme Court. Stephen Zenner/AP

A week after the violent insurrection at the Capitol, we’re learning more and more about the people who charged the building. And recent reporting from Vice, Jezebel, and others reveal there were quite a few anti-abortion extremists at the pro-Trump rally, if not in the Capitol afterward as well. You’re probably thinking, hmm, ok, that makes sense—and it does! But the overlap of these universes cannot simply be boiled down to the fact that Trump supporters are more likely to strongly oppose abortion.

The violence we saw at the Capitol—and the inflammatory rhetoric and disinformation that led up to it—in fact mirrors what’s been plaguing the debate around abortion for several years.

The overlap of these universes cannot simply be boiled down to the fact that Trump supporters are more likely to strongly oppose abortion.

Anti-abortion crusaders at the Capitol included Taylor Hansen and Jason Storms. Hansen is a white anti-abortion activist whose claim to fame is that he has appropriated the Black Lives Matter movement by painting the words “Babies’ Lives Matter” outside of Planned Parenthood clinics in places like Washington, DC, and Salt Lake City. He was reportedly filming inside the Capitol when Ashli Babbitt was shot and killed. Meanwhile, Storms, the assistant director of Operation Rescue, posted a video to Facebook that he filmed while perched on scaffolding at the Capitol. The West Virginia politician who was recently elected and already resigned, Derrick Evans, was also there; Evans has spent years harassing people at the state’s lone abortion clinic to such a degree that a restraining order was eventually filed against him in 2019.

Other notable activists were at the “Save America” rally beforehand: Abby Johnson, the Planned-Parenthood-employee-turned-anti-abortion-luminary, who has made quite a name for herself, spoke at the gathering that morning in defense of the “most pro-life president to ever hold office.” Mark Lee Dickson, a Texas man who travels around the state to convince local governments to pass (unconstitutional) city ordinances banning abortion, also attended, according to photos posted to his Facebook page. The text accompanying the photo includes the tired (false) claim that there was an “Antifa plant” there stirring up trouble, and “a handful of people there that were anti-police and intent at causing destruction.” In a now-deleted post, Johnson made similar claims, writing, “I KNOW Antifa was there because I was almost knocked down the stairs of the Capitol when a fight broke out between some Trump supporters and some Antifa activists. It was discovered that some of the people in the crowd were actually with Antifa, but were posing as Trump supporters.”

At one point, Operation Rescue worked under the motto: “If you believe abortion is murder, act like it’s murder.” Of course, someone did.

But, as we can now see clearly, to pretend there is no connection between violence and rhetoric is naive. The “pro-life” movement has consistently peddled inflammatory disinformation that has been tied back to acts of violence. At one point, Operation Rescue worked under the motto: “If you believe abortion is murder, act like it’s murder.” Of course, someone did. When Dr. George Tiller was murdered in Witchita, Kansas, in 2009, the killer said he had donated “thousands” of dollars to Operation Rescue, and the phone number for the group’s senior policy adviser, Cheryl Sullenger, was found on his car dashboard. (Sullenger herself had been previously convicted of attempting to bomb a California abortion clinic, though that did not stop Operation Rescue from hiring her—she has since become the group’s senior vice president.) Operation Rescue released a statement denouncing the murder, but had spent the years before calling Tiller a “baby killer,” and accusing him of “botched abortions” and Tiller’s clinic of “uncleanliness.”

What we saw last week was a similar real-world manifestation of extreme and violent rhetoric; that there is significant overlap between the worlds of participants here is no coincidence.

Unfortunately, as warnings about more political violence proliferate, experts worry abortion-related violence may also get worse before it gets better. As Rewire News reports, we are entering a new era of disinformation in anti-abortion campaigns that could prove to be more dangerous than ever before. QAnon, which began as a conspiracy theory that Trump is facing down a secret cabal of pedophilic high-profile liberals, has given fresh oxygen to Daleiden’s macabre allegations in the past couple of years. Specifically, within the past several months, the Q community has amplified the misconception that the coronavirus vaccine is chock-full of fetal tissue (at the behest of Bill Gates, naturally). What once was considered to be a fringe belief system has once again spread to the masses.

It’s easy to find disinformation on social media, and anti-abortion disinformation is particularly incendiary given that its purpose is to support the belief that abortion is murder. It thrives on horrifying imagery. And that’s just the point: to spur people to action.