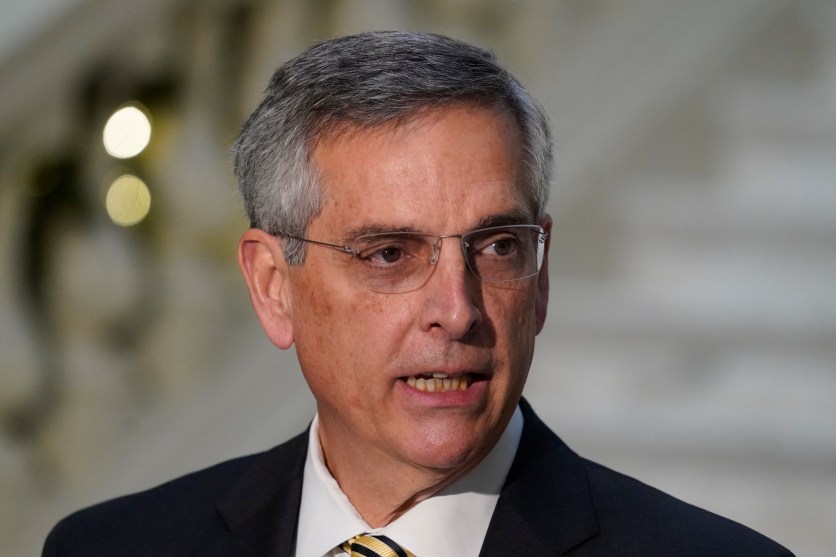 Georgia Secretary of State Brad Raffensperger has received widespread praise for defending the integrity of his state’s election and refusing to go along with President Trump’s unprecedented attempts to overturn the results. This became front-page news over the weekend when the Washington Post revealed that Trump had called Raffensperger and asked him to “find 11,780 votes” to nullify Joe Biden’s victory in Georgia, which Raffensperger refused to do.

But while he refutes Trump, Raffensperger has been more quietly backing his party’s efforts to make it harder to vote, just as Georgians cast their ballots in two critical runoff elections Tuesday that will determine control of the Senate. The most significant measures could prevent Democrats from winning future elections by targeting the methods that have led to record turnout in Georgia. After Black voters and Democrats used mail voting at a much higher rate than white voters and Republicans in the November election, Georgia Republicans have vowed to pass sweeping restrictions on mail voting this year. Raffensperger has endorsed these efforts, calling for an end to no-excuse absentee voting, which 1.3 million Georgians used in November, and for voter ID requirements to be extended to mail ballots. “It opens the door for potential illegal voting,” Raffensperger said of mail voting, even though his own data—which he has repeatedly cited to defend the integrity of the November election from Trump’s assault—shows no evidence of widespread voter fraud.

None of that will affect Tuesday’s races, but other actions he’s taken might. He has accused progressive voter registration groups that focus on registering young voters and voters of color of trying to register ineligible voters during the runoffs. He’s offered scant evidence to back up these claims, which voting rights groups said were designed to dampen participation among these constituencies. He also backed efforts by conservative groups to challenge the eligibility of thousands of voters during the runoff elections. Under his tenure as secretary of state, several counties have closed polling places, and minority voters forced to wait eight times as long as whites to vote during the state’s disastrous June presidential primary.

Raffensperger’s actions are part of a broader trend among state-level Republican legislators and election officials, who have won plaudits for refusing to subvert the election results but have nonetheless weaponized Trump’s discredited fraud claims in order to propose new measures this year limiting mail voting and early voting in states like Wisconsin and Pennsylvania to prevent high Democratic turnout in future elections.

If Raffensperger really wanted to be a hero for democracy, he would not just stand up to Trump but disavow his party’s entire voter suppression crusade.